One would assume the media has all of the resources available as the general public. When Los Angeles’ KTLA decided to do a story on a controversial police shooting in the Huntington Beach community, care would be taken to assure all angles of the incident were presented to the people.

It looks like we expect too much of the media with an agenda. 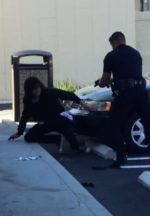 Videos posted on Twitter Friday morning show a Huntington Beach police officer struggling with and then firing multiple times on a man who collapses in front of a 7-Eleven. Police say the man was hospitalized and later died.

A 17-second video of the incident was initially posted to Twitter just after 9:30 a.m. It shows an officer firing multiple times at a man, who falls to the sidewalk.
— KTLA, 9/22/17

It was the one minute and thirty-six second video they didn’t show that makes a stark difference in the perceptions the media shared with the public and the reactions they got to air.

A Huntington Beach Police Department spokeswoman said the officer contacted a male individual outside the 7-Eleven at 6012 Edinger Ave. and they “got into an altercation.”

If we could find and present the second video angle, why couldn’t KTLA?

It was convenient for KTLA to feature a woman angered by the shooting and while it’s also clear she didn’t see the video of the man charging and attacking the officer with multiple punches and an unknown object, she sure came up with a pretty decisive verdict.

The way I feel — these officers are not being trained right. And they don’t value human life, because if they valued human life, they would not jump and be so trigger-happy. Why is it every time you turn around there is a child, there is a mother, there is a father, uncle, somebody is getting murdered by the police?
— Marie Sales, “neighbor”

When you only show one side of a story, you create a narrative that will be believed by the public, and especially when it comes to police shootings, ramifications can negatively affect an entire community.

What’s dangerous is if that narrative was created due to incompetence or deliberate activism.

Despite other news outlets publishing the secondary angle, KTLA has yet to issue any update with that possibly exculpatory video.