Because of partisan holdups on Capitol Hill, there are many vacancies of political appointments and support staff positions down line in the Trump Administration. There are also a lot of Obama holdovers that could also be stifling the process.

The Obama administration is requiring federal supervisors take a more active role in the hiring process, issuing new guidance Tuesday it says will help agencies better recruit and assess top talent. The guidance aims to instill several core principles into federal hiring, the first being to strengthen collaboration and clarify the distinct roles of HR staff and hiring managers. It requires supervisors to stay involved in every step of the hiring process, from the marketing of positions to candidate assessments.
— Government Executive, 11/1/16

Why is this important?

Because on June 15th, the Conservative Partnership Institute held a job fair on Capitol Hill and while their goal was altruistic and supportive of President Trump and his agenda, did they anticipate sabotage and/or infiltration by #TheResistance? 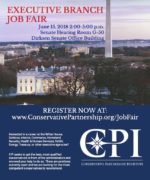 I was invited to attend the job fair and was asked to register in advance, which I did. However, there were a lot of people who weren’t preregistered and were still allowed to also enter the job fair. As there is a visual profile that liberals meet, I can honestly say some of those in attendance were NOT conservatives.

Despite the good intentions of the Conservative Partnership Institute, the ultimate decision on hires may not be by those loyal to the president but the entrenched “HR staff and hiring managers” dispatched by Barack Obama to keep the federal government as leftist as possible and one need only look at recent events to understand the rabid nature of some in the federal government and their resistance to having their safe spaces polluted by those who have the nerve to have an opposing political affiliation.