For many years, we’ve been highlighting false rape accusations; a topic many progressive women immediately disregard because it damages their assertion that all accusations are to be believed because women never lie. There are female activists who don’t care if innocent men are damaged as long as the “movement” remains unfettered.

Emily’s time will come and she’ll initially be horrified that something so unfair and damaging could ever happen to HER. Karma always creates that ironic opportunity for honest introspection.

Despite many men spending years in prison because women either sought personal attention or needed to provide their cheatin’ selves an alibi, the topic of false accusations has received scant, selective attention because too many of the accused men are deemed insignificant.

In Harper Lee’s novel To Kill a Mockingbird, an all-white jury convicts an innocent black man of raping a white woman in a small 1930s southern town, despite the efforts his lawyer who defies the town’s lynch-mob mentality and proves the victim’s story to be false. It’s a new century, a sequel has just come out – and we still have men being falsely convicted of rape despite the evidence. This time with leftist’s staffing the lynch mobs.
— False rape accusations are common 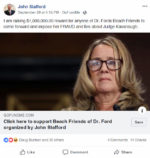 That is, until it happened to a judge.

I am raising $1,000,000.00 reward for anyone of Dr. Fords Beach Friends to come forward and expose her FRAUD and lies about Judge Kavanaugh.
— John Stafford Facebook post, 9/29/18

Unfortunately, Supreme Court Justice Clarence Thomas didn’t have the benefit of social media “likes” during his 1991 confirmation hearings so we’ll never know if anyone would have started a GoFundMe campaign on his behalf, but false accusations were lucrative and icon status-creating for Anita Hill and they sure will be for Christine Blasey Ford as long as we’re told to #BelieveWomen and they know it.

Too many men have lost reputations and some are still languishing in prison cells because women lied about being sexually assaulted for a variety of narcissistic reasons, and aided by #BelieveSurvivors activist public attorneys who callously disregarded exculpatory evidence, amp up charges with possible lengthy sentences so lesser plea bargains are accepted. The more people put away, powerful high-paying judgeships are the shiny-thing lure.

Massachusetts prosecutors have violated defendants’ rights to a fair trial regularly and without punishment, even as wrongfully convicted victims of tainted prosecutions have spent years in prison before being freed, decades of court rulings show. Some prosecutors failed to turn over important evidence to defense attorneys or didn’t disclose information bearing negatively on witness credibility, judges said. Others misrepresented evidence in their closing statements to the court.

Must be nice to be liberal and devoid of conscience.

It’s again sad to note how many innocent “ordinary people” have to suffer devastating injustice until someone of “importance” suffers the same plight. All of a sudden, it’s an emergency worthy of attention and immediate action.

Chalk this up to yet another example of liberal shortsightedness. Judge Brett Kavanaugh may have been a nonpartisan before the Supreme Court confirmation process but thanks to Democrats and this experience, he’s understandably a far right-winger now.