#MeToo Backlash: Lib Women Will Whine (Again) About Being Ignored

For those of you over 40, you may remember women’s magazine articles every few years with that same lament: “Why can’t I find a man?” 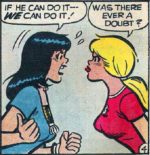 One of the main contributors was the loud feminist mantra, “I don’t need a man” that left some women with a fist held high in one hand and a smoldering bra in the other, while other women just threw up their hands in the frustration of self-inflicted sabotage.

We can only imagine the conversations that were had between parents and their young male sons who just left the nest for a college campus. How many responsible parents warned those sons to be VERY careful with any female student they would come in contact with, all the precautions that would need to be considered before having any contact with one that could possibly be a love interest, and the possible negative ramifications of such an interest that could follow them for the rest of their lives.

Suppose a woman wakes up in the morning after a sexual encounter and then labels it sexual assault, to the surprise of her sexual partner. Did this woman regret having sex and then say she was a victim so she doesn’t have to come to terms with her actions? Is she lying about being sexually assaulted so people don’t think she is a slut?
— UNC Healthy Heels, 11/7/13

If you have to pose this as a defensive scenario, there’s an inconvenient element of truth that needed to be initially acknowledged.

But we’re told we must #BelieveWomen….

After the stigma placed on men with the implementation of Title IX on campus and more recently the #MeToo movement, how long before women (again) start whining because fewer men are giving them the time of day, let alone a date or assistance in a workplace. Men are now rightfully being very careful.

Women, as portrayed by Democrats, their media and activists, are not looking very attractive and we don’t just mean physically. They’re coming off as unhinged and few men find that kind of potential drama as a positive draw. A lot of these women also appear to be on a revenge mission which leaves any man in contact with them in potential jeopardy, which also translates to the workplace or any space that men and women cohabitate.

Prior to #MeToo, cautious male supervisors would always leave an office door open when talking to a female, equal or subordinate. How many employers have had to absorb the expense of creating really cool offices with glass walls; not because of the attractive aesthetics but to protect themselves from potential accusations of what may or may not have been said or done behind an opaque wall or closed door?

As in most movements that are not well-thought through, there are serious ramifications for impulsive action. Sure, some of these women will find solace within the sisterhood, declare themselves bisexual so they can achieve immediate gratification, but for those who don’t swing that way, the isolation will grow and the frustration will again become a vocal rallying cry.

This time, it’s a different world.

During the Gloria Steinem days of feminist empowerment, it was all about recognition and independence. She and others also claimed to be speaking for all women. Today, #MeToo is all about payback and they claim to be speaking for all women. The problem this time is that some of these women have husbands, brothers, sons and others who are potential targets of those who have agendas and personal issues, mixed with that nasty lack of conscience. They’ll punish any man who rejects them, didn’t reward them as they saw fit, and in the case of a potential Supreme Court justice who could potentially hamper their ability to do what they want with their bodies (and babies within).

Again, things involving the human condition tend to be cyclical. #MeToo women are using their movement to punish men who they claim abused them. They’ve also cast a wide net and have indicted all men as potential sexual abusers. Democrats are using the Kavanaugh confirmation as midterm election topic, many in the electorate are being justifiably repulsed, and fewer men will hold a door open for a woman, let alone vote for one and her offending political party.

The “Why can’t I find a man?” public whining will begin again. This time, there will be a response because of everything #MeToo.

An infrastructure-investing manager says he won’t meet with a female employee in rooms that don’t have windows; in addition, he “keeps his distance in elevators.” Another man, in private equity, has a new, self-imposed rule that says he’s not allowed to have a business dinner with any women who are 35 or younger. (Apparently, after 35, there’s no risk of doing anything appropriate, as women turn into old hags.)

I think Bess Levin meant “doing anything inappropriate” but correcting a woman’s grammar is probably a bad thing.

The horror stories continue. An investment adviser who oversees roughly 100 employees said he started to reconsider having one-on-ones with junior females. Others are refusing to sit next to female colleagues on flights and booking hotel rooms on different floors during work trips. #MeToo, according to David Bahnsen, a former managing director at Morgan Stanley, is “creating a sense of walking on eggshells.” Men, employment attorney Stephen Zweig told Bloomberg, are concerned about “a false accusation,” and “fear what they cannot control.”

Remember how many times we were all told false accusations are “rare”?

Well, it looks like men have been listening and are now responding accordingly.

Avoiding women at all costs doesn’t just make the men of Wall Street look like weird Mike Pences who apparently can’t control themselves in the presence of the devil sex. It also has a damaging effect on the careers of the women they’re shunning for fear of being accused of sexual harassment.
— Vanity Fair, 12/3/18

Women celebrated sticking it to the men and now men are looking to avoid them like the plague.