There were numerous stories that echoed the media narrative that the election of Donald Trump was the beginning of racist hate in the United States: one of particular note was a “noose found by tourists” at the Smithsonian National Museum of African American History and Culture.

However, not ONE media story included the word “alleged”. The discovery of the “noose” was reported as a factual, corroborated incident; not one that required any verification with physical proof.

secretary of the Smithsonian Institution, said in an email announcement that he had to share “deeply disturbing news” that the rope was found in an public exhibition space Wednesday afternoon. It was in the Segregation Gallery on the second floor of the history galleries.
— Washington Post, 6/1/17

Under Skorton’s leadership, a new strategic plan has been developed with a focus on convening critical conversations about topics of vital public interest.
— Smithsonian

Looks like we have a conversation and it turns out this was the second such incident that occurred on Smithsonian grounds. 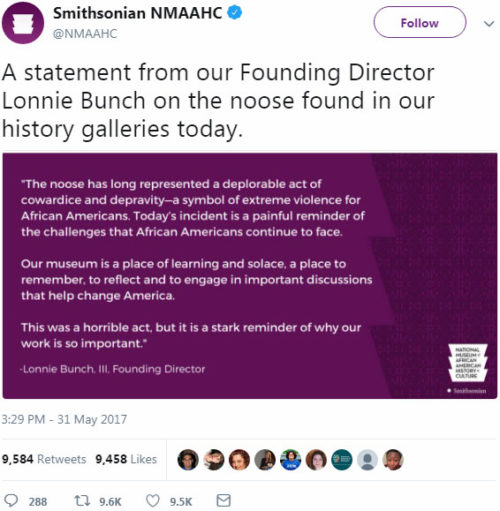 Note Lonnie Bunch‘s intentional use of the word “deplorable“, a pejorative prominently used by Hillary Clinton and her supporters to describe Americans who supported presidential candidate Donald Trump.

The disturbing incident comes only four days after a noose was found hanging from a tree outside the Hirshhorn Museum. The investigation into the noose found at NMAAHC is ongoing, but the public and staff have been assured that the museum is safe.
— Smithsonian Magazine, 5/31/17

If at first you don’t succeed….

Not being one who immediately accepts a media or activist action line, especially when one story concluded with,

… one museum official to Fox 5 they have “no interest in sharing the video”….

I filed a Freedom of Information Request with the Department of the Interior of which the museum falls under its jurisdiction.

Request Description:
I respectfully request an electronic copy of the surveillance video surrounding the events of a “noose” being hung at the Smithsonian’s National Museum of African American History and Culture on May 31, 2017.

According to media reports, “There have been reports that surveillance video was recorded inside the gallery, but officials have yet to release any details on what might have been captured on tape. On Monday afternoon, a museum official told FOX 5’s Kristyn Leon they have “no interest in sharing the video,” but didn’t say why. Earlier in the day, another museum spokesperson said it’s part of protocol to turn over any surveillance video that might exist to police as part of the investigation process. In this case, the spokesperson also said they’re not even sure that video of the person or person who hung the noose inside the museum’s gallery even exists, and the couldn’t talk about what was on the video that has been turned over to U.S. Park Police.”

To assist in determining my requester category to assess fees, you should know that I am: a representative of the news media and this request is made as part of a news gathering effort and not for commercial use.

Despite the numerous emails with government officials since the initial filing through the end of September, the determination was “completed” on March 26, 2018. 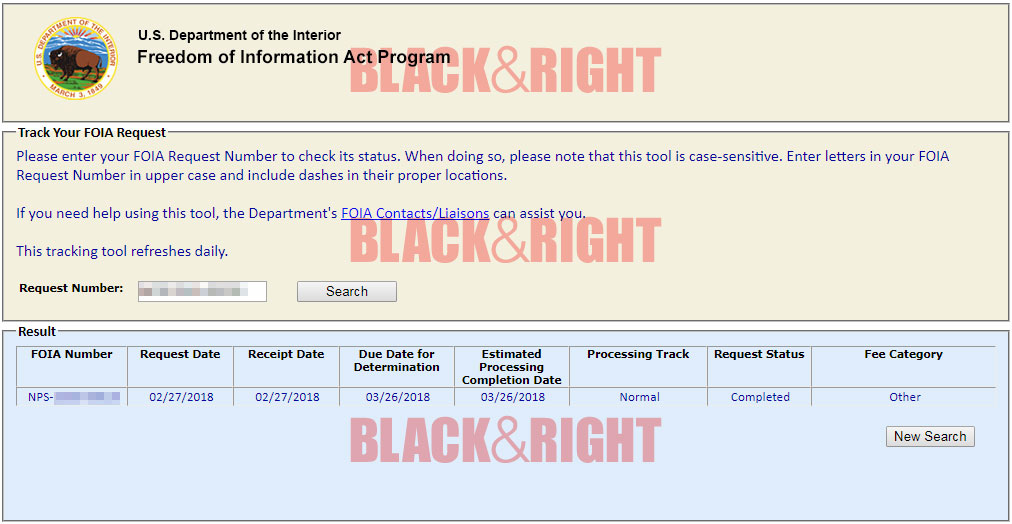 Still no video from the Department of the Interior. Yes, over the phone with a very polite federal employee I was told that the faces of children had to be blurred from the video segment in question, but I know this doesn’t take seven months and I can only guess that if a supervisor high up in the federal government requested a blurred piece of video, it could be done in an afternoon. As someone there may have assumed I was a video production illiterate, I could have suggested the whole video be blurred except for the “noose” in question. That could have also been done easily in hours, not months.

Museum director Lonnie Bunch claimed he didn’t know who left the “noose” but was quick to condemn whomever left it as having a problem “of an America they didn’t agree with”. In the above interview, Bunch didn’t seem to be all that motivated to seek out and identify whomever supposedly left the hate symbol in the museum.

On September 24, 2018, the following letter from the Department was emailed in response to the initial FOIA request. Oddly enough, the response is dated May 23, 2018. 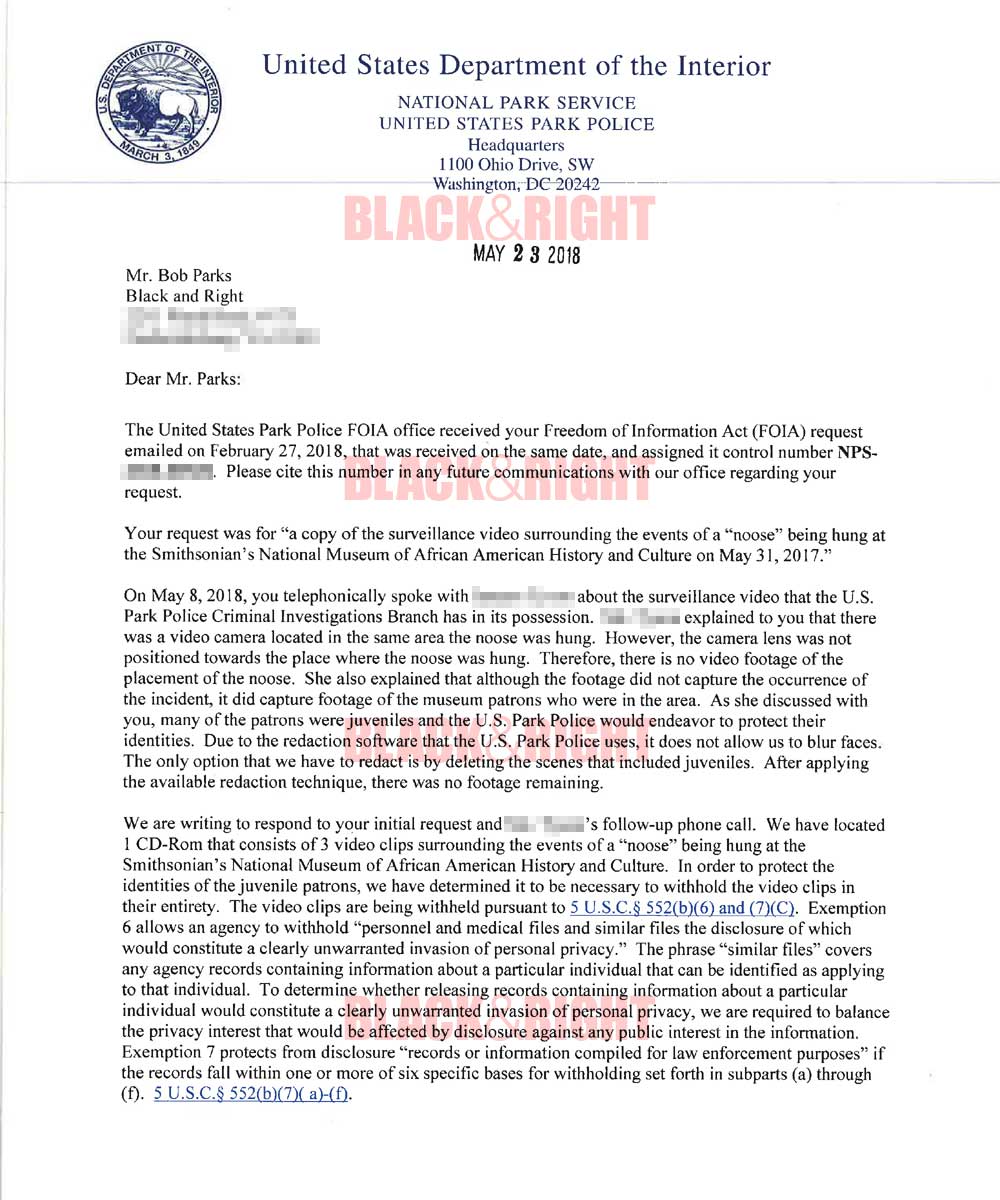 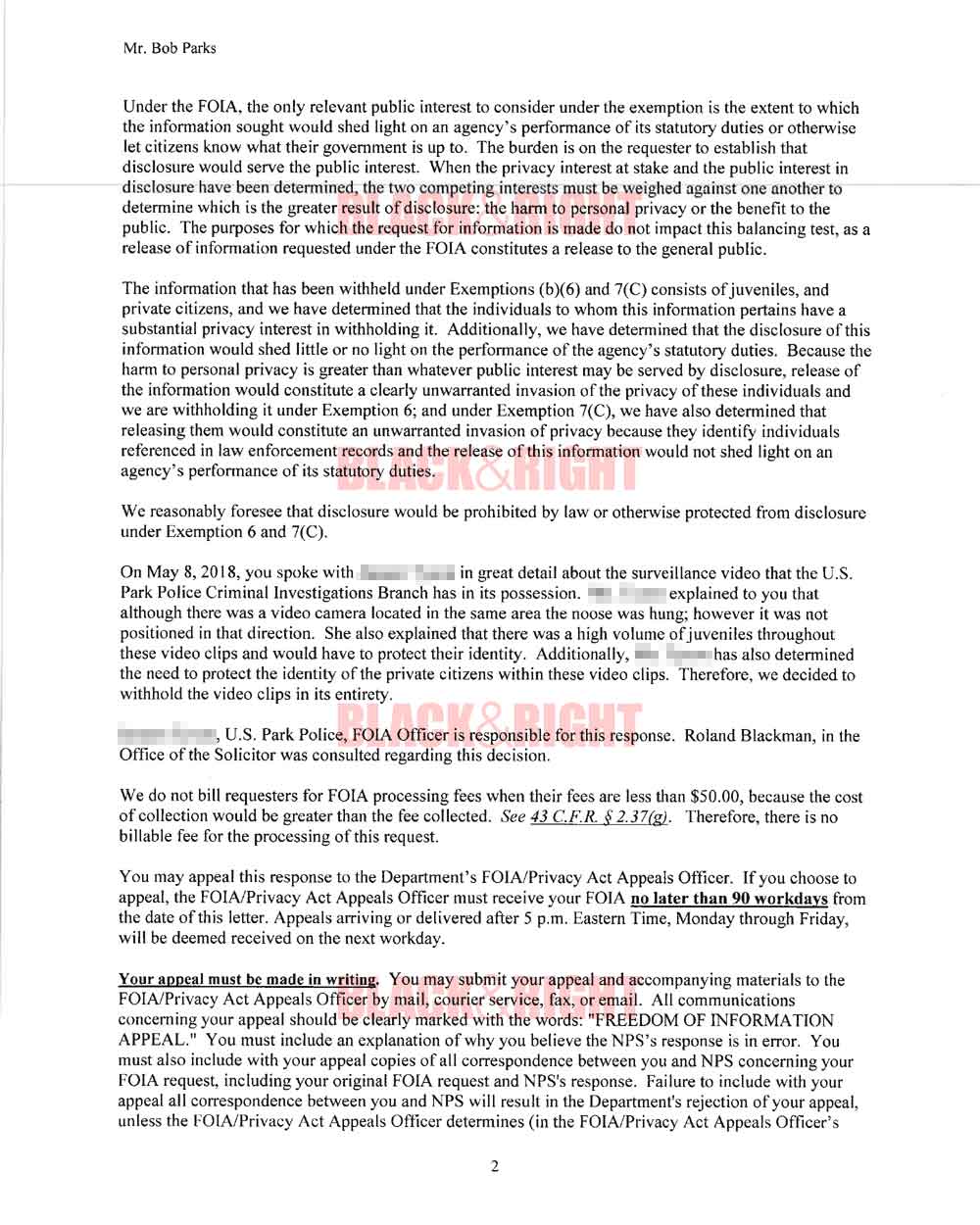 I understand the desire to observe the privacy of “juveniles”, even in a public place but it also requires a suspension of common sense that for all of the high-tech “security you don’t see”, the “noose” was supposedly left in a “public exhibition space” where electronic surveillance was blind. Even more unbelievable is that in the age of personal smartphones with still and video cameras, the many “tourists who found” it as well as horrified museum staff, NOT ONE picture or video of the “noose” made it to a Facebook page, Twitter or Instagram post… nothing that shows that “noose” in the museums on the dates in question.

In whose possession is the physical “noose” today? Shouldn’t it be on display as an unfortunate but relevant “recent acquisition”?

It could be concluded this was another contribution to the Democrat #resist, #anti-Trump smear on Americans by creating the illusion of a racial divide. What could be a possible motivation for the museum to push a false narrative? It could be as simple as “follow the money”.

It was thousands of black donors from across America giving amounts ranging from $1.50 to over $20 million that made the vision a reality. African Americans represented 74 percent of the individuals who gave $1 million or more, which doubled expectations.
— Michigan Chronicle, 9/26/16

Too many American nonprofits are top heavy and rely heavily on charitable donations to cover overhead and personnel expenses. The National Museum of African American History and Culture has a nonprofit educational .edu and seeing how three-fourths of their donors are black, why not repeat a proven fundraising tactic: play on fear and the “noose” is a simple yet powerful symbol of the ironically racist history of the Democrat Party, which is something the museum may not be totally honest in presenting.

The Democratic Party is proud to celebrate the opening of the Museum of African American History & Culture, and all the extraordinary women and men of our past, present and future engaged in the fight for true equality.
— Democrats.org

Seven months after filing a Freedom of Information Request and the stalling of the initial response from the museum that the video was not going to be made available, the only reasonable conclusion is that there was no “noose” found at a Smithsonian museum. What the media was told was untrue, what the media irresponsibly reported to the public wasn’t true, and those at the very top of the museum staff are aware this never occurred. Someone appears to have concocted and/or perpetuated a politically-driven falsehood meant to inflame easily-inflamed liberal activists and inspire bleeding-heart donors.

There are some people within our society who can assert anything, smear anyone, despite proof.

When Lonnie Bunch started working on the Smithsonian’s first black museum, he had no collection, no building and one employee.

Bunch, in an interview with The Associated Press, said his time leading the Smithsonian National Museum of African American History and Culture will serve him well. “The Smithsonian is the most amazing place, and sometimes it forgets to act like it. I want it to act like the best institution in the world,” he said.
— USA Today, 5/29/19

We’ll see just how well behaved the public will be in the museums, now that Bunch is in charge AND responsible.