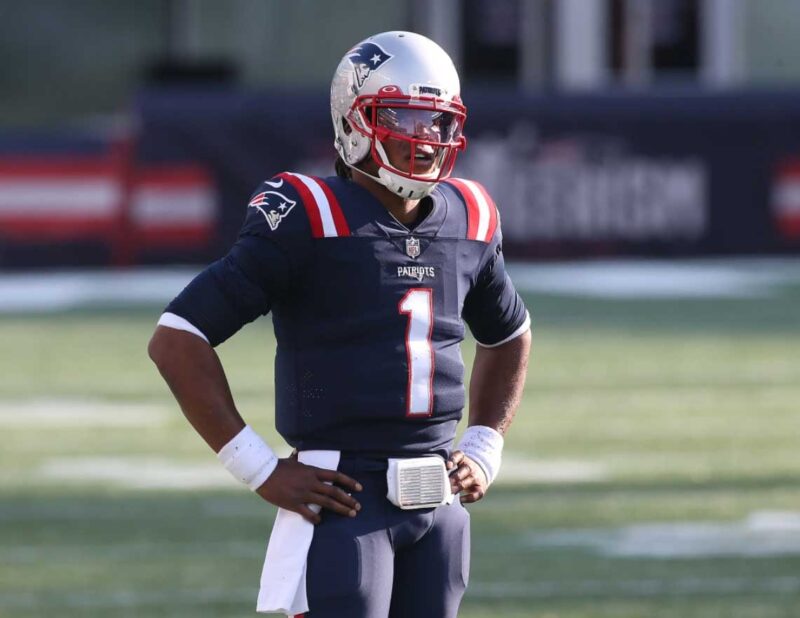 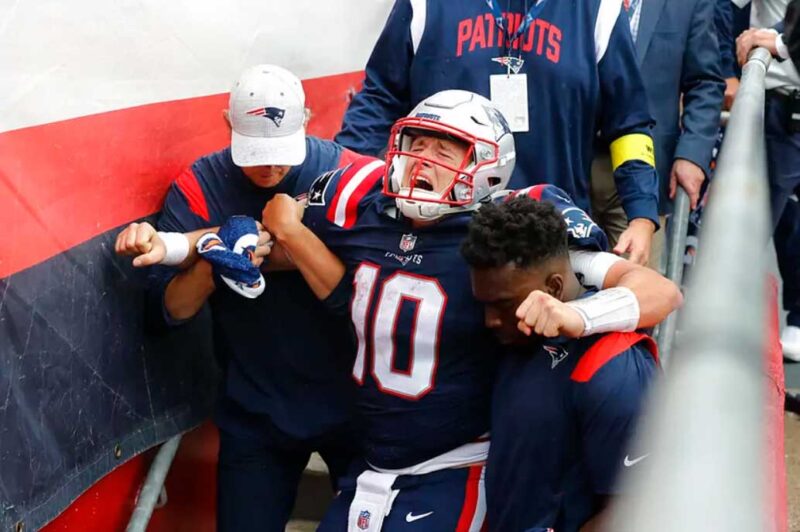 Many of us have seen injuries; many catastrophic, season-ending injuries and have NEVER seen a professional football player make a display like the one Patriots quarterback made after an ankle sprain. If Mac Jones doesn’t show improvement at the position soon, these pictures will become nasty memes.

And with the “injury”, the blabbermouths launched into rabid speculation….

Cam Newton knew coming to New England was boom or bust and quickly. He was in the no-win position of having to be the bridge quarterback after the GOAT. Due to the late 2020 contract offer, he missed organized team activities (OTAs), mini camp, and because of COVID protocols, enjoyed much of training camp on Zoom learning the most complicated playbook in the NFL. As expected, the Patriots didn’t make the playoffs but compared to other notable bums, things could have been much worse.

In fact, he exceeded some expectations.

And he did this despite the constant nagging of the Boston sports media who got petty with his rap music and hats. You’d swear by their attire, Boston Bruins forward David Pastrnak and Cam shared the same closet. No negativity, ever, about Pastrnak’s wardrobe choices. 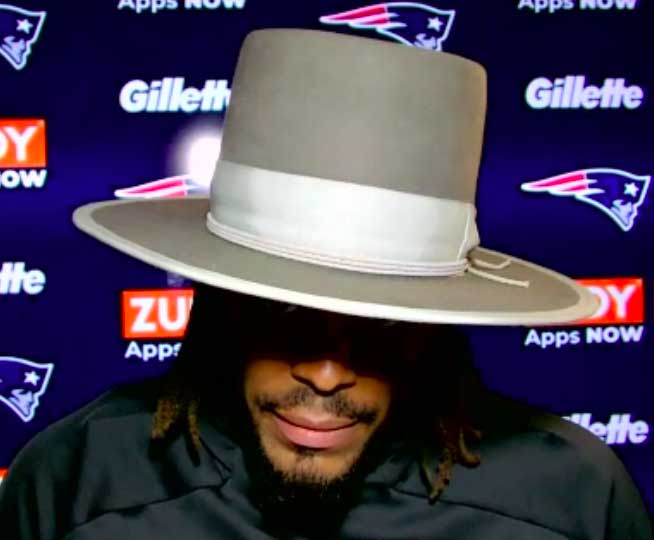 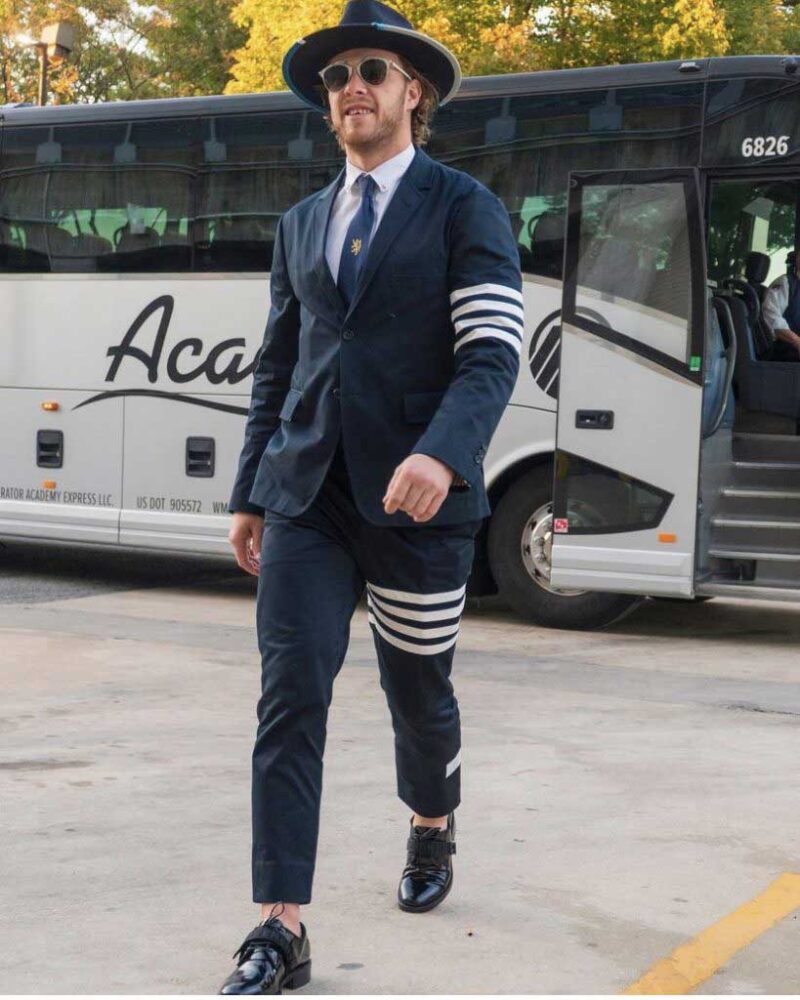 No quarterback playing in his first season under Bill Belichick has had a good year. Again, mastering a new playbook every week was a new challenge for most. The second season was, to varying degrees, better.

1991: In Belichick’s first season as head coach with the Cleveland Browns and Bernie Kosar as his starting QB, they finished with a 6-10 record.
1992: Slightly better at 7-9, considering his quarterbacks were Mike Tomczak, Kosar, and Todd Philcox.
2000: Drew Bledsoe was 5-11 during Belichick’s first season as Patriots’ head coach.
2001: Both Bledsoe and backup Tom Brady went 11-5 and took the Patriots to the Super Bowl and won.
2020: The Patriots were 7-9 under Cam Newton.

Every quarterback in the history of the New England Patriots got at least a second season opportunity. Every quarterback except Cam Newton. And the Boston media and fans made it clear he wasn’t going to be given a second year….

Despite the clear improvements from his first season with the team, Cam Newton was unceremoniously cut in after the 2021 preseason and Mac Jones was given the keys to the car with very mixed results since.

Why would Newton want to come back to a region that treated him as disrespectfully as some in the media and fans treated him?

Tom Brady left the Patriots (among a myriad of reasons) because they lacked the weapons for him to succeed. Because of salary cap complications, Cam Newton inherited a depleted team in 2020. But the Patriots loaded up in 2021 and it could be argued one reason why the high-priced free agents acquired haven’t found the shine since because they signed lengthy contracts with the understanding they’d be playing for a legendary coach and with a former MVP quarterback.

Hunter Henry, who again said a “good quarterback” was crucial, excited to play with him?
“I am. I am. Very excited,” Henry said regarding Newton.
— NESN, 3/22/21

Jonnu Smith says he has plans to join Hunter Henry in working out with some of his teammates in Southern California in the offseason to help “get on the same page” before training camp and, more importantly, “build brotherhood” off the field. He’s also spoken with New England’s presumptive starting quarterback Cam Newton by phone: “He’s a hell of a guy.”
— Boston.com, 3/23/21

“His work ethic, that’s the main thing that stands out to me. Everything he’s been through these last few years. Just how he works that always takes over everything. He’s earned his opportunities, he’s earned his contract this year. I know he’s going to have an awesome year. I’m just excited to play with him. I told him, ‘I’ve been watching you since I was a young guy. It’s an honor to just play with you, man, pick your brain and get out there with you. And help you get better. I know you’re going to help me get better.'”
— Kendrick Bourne, 3/29/21

“Super Cam (Newton), excited to play with him,” Matt Judon said. “Growing up watching what he did in college to becoming an NFL MVP and leading his team to the Super Bowl. They barely lost. What he meant for QBs at the time, it was just incredible what he did.”
— NESN, 5/18/21

Would these players have risked the prime years in their career to play with a rookie? Too many have seen how dismally that usually works out and I wouldn’t doubt there are some players in the Patriots locker room who may feel a little deceived on what initially made them sign and would’ve liked to see Cam get that second chance.

Personally, I didn’t care for Cam Newton prior to his Patriot days. He was an enemy combatant but given his resume, I was more than willing to see how a few years with weapons could have worked out in New England. I, and many supportive Patriots fans with an attention span that didn’t start in 2001, never got that opportunity and just because the team is kinda’ desperate now (as they were in 2020) doesn’t mean Cam should submit himself to sacrificial lamb status again, especially for another insulting contract and the sadistic sports media environment.

“The New England experience was a fucked-up situation. I was still learning the offense seven to eight weeks into the season… It was just brain overload. It was times I was going to the line and I’m still thinking … Did I know it? Yes. To the degree that I needed to know it to show the world that I’m still Cam Newton? No… But I put myself in that situation.”
— Cam Newton, 6/10/22