VENT: When the Left Issues Demands, the Right Should Respond ‘FAHQ’

You know, there comes a time when you just throw up your hands and say “Enough is enough” and if you don’t like it, too fuckng bad.

Democrats, the left in academia and entertainment, the workplace and almost every other area in which we all must share equal space have dictated how we must think, how we should speak and everything has to be on their terms or face their wrath. They’ll troll your social media accounts, accost you in the street or outside your home and we’re just supposed to take it because THEY say so?

The United States of America, as flawed as anything involving human beings will be, is still the best place in the world to live and I’ll not just sit by and let any psychologically-damaged individuals or group tell me how to live my life, so to hell with your “raising awareness” causes and hashtags. Keep touching yourselves while pushing nonsense on others that defy any semblance of intelligence.

There are only men and women. That’s how those who survive the “woman’s right to choose” come out of the womb. I will not spend valuable time memorizing ever-evolving LGBTQ-MOUSE acronyms because the voluntarily “gender-fluid” confused wish to self-evolve and demand I observe every aspect of their psychosis.

I reject any liberal trying to tell me how to look at our nation on racial terms, and that goes for every Democrat Stepin Fetchit who goes on television and looks at everything anyone says or does through a hypersensitive racial lens.

People, for the most part, get along. It’s race hustlers, from minority “community activists” to white liberals who have some kind of street cred because they have black friends outside of their gated communities. These are the people who use race as a political weapon and lie to blacks about our history as they have no respect for those whose history they intentionally distort. Malcolm X said that blacks who support Democrats who promise much before Election Day and don’t do shit after are “traitors to your race“.

Imagine how he’d look down at those who appear on cable news, teach in our schools and/or suck up to scraggly-haired liberals on PBS.

Race and/or gender swapping just to be socially provocative is just another poke in the eye of the American people so the left can act like they’re more enlightened than the rest of us. Broad acceptance is another thing. 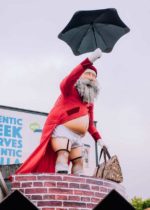 Traditional holidays are just that and have been so for decades.

I will happily observe Columbus Day, Thanksgiving, Easter, and say “Merry Christmas” instead of “Happy Holidays”. Kwanzaa is as made up as a lot of the unpronounceable made up names found in the black community as a way to piss on the very nation that’s given so many the opportunity to squander.

The climate changes now as it always has and I’m not going to bow down to the altar of global warming activists just because they have a new reason to deny me a comfort of living they won’t hold themselves to. I am a denier just as Republicans before me believed black people have souls; a humanity Democrats denied us and eagerly killed people over. I will not give up my car, turn off power for a symbolic hour once a year so Al Gore can ride around in an air-conditioned SUV or private jet unencumbered by conscience.

The United States of America is also a nation founded on the tenets of Christianity; not because the Founders were zealots but because they believed there is something greater than themselves; a notion not observed by today’s narcissists who believe everything must be all about them and their “safe space” comfort level.

I will proudly say “Under God” when reciting the pledge and put my hand on my heart during the playing of our National Anthem. I will not kneel out of solidarity with black people who have issues with deadly confrontations with law enforcement. The easiest remedy is to have the FATHER in the home tell their young black sons to be off the streets at a decent hour. That would obviously result in fewer black men being in prison and bleeding heart liberals won’t need to call for any kind of “reform” as an excuse for not affording blacks the common courtesy of knowing right from wrong.

“Socio-economic conditions” are not an excuse for committing crime and to use that progressive retort is a fucking insult. There are millions of people in this country who are “poor” and don’t have that instinctive impulse to go out and rob a convenience store, let alone break into someone’s home and commit a variety of battery or worse. Denying blacks that expectation of humanity is just one example of the very racism liberals project on others while they justify the very stereotypes privately joked about.

I will NOT show empathy for those who make a conscious decision to violate our sovereign borders and then demand we support them with cash, food and housing while Democrats play word games as veterans languish in the street. I could give a shit if illegal alien children are hungry. So are homeless Americans and they’re the ones who are made to jump through hoops when they’re in need, but illegals have whole local and federal government infrastructures open to them where they don’t need any kind of documentation to receive generous assistance.

Meanwhile, Americans are discriminated against for certain jobs because they don’t speak a language other than English in their own United States of America.

There was a time when people immigrating to the United States WANTED to be Americans. They made every effort to learn the language and speak without an obvious accent, wear American clothes and blend into our society. They never demanded American submit to their national and/or religious customs; you know, like is routinely done in the countries they fled.

Should I own my own business, NO ONE will tell me who I can or can’t employ and how I must accommodate employees who voluntarily applied to work for me. So will I be careful of whom I hire? You’re damn straight I will and that’s not my fault for being suspicious.

There are activists who go to selective businesses and ask them to do things against their religious beliefs just so they can create controversy. I say “selective” because there are places they won’t go to harass because the pushback may be more than they wish to deal with. There are activists who go to selective businesses just to make a big deal over bathrooms. As alluded to above, I will only have them in pairs of two: one for men and the other for women and they will be used appropriately. I will not let anyone make me conform to their confusions.

Call me a “hater” because I refuse to succumb to “social justice” demands of petulant children? Again, fuck you.

Liberals are the most racist, anti-semitic, discriminatory of people and it’s in their bloodline. They’ll freeze you out of jobs because you’re not a Democrat. They’ll issue racist vitriol if your black and a Republican. They’ll chastise you if you’re a woman who didn’t vote for Hillary Clinton; a flawed, weak candidate who’s never been able to win an election without the road being cleared for her. They’ll ruin your livelihood and even try to put you in prison just because you’re not a Democrat.

I could care less if anonymous cowards get all bent out of shape on Facebook or Twitter. I’m not not impressed with any of those pussified, lying progressives who claim to receive death threats and show no proof. After a 2005 appearance on CNN, I received hundreds of racist emails an hour directly (there was no real social media then) and I published some of the gems on this site. I did that before and I’ll do it again. I get “hate”, I’ll get screenshots and share with the world the messages with as much of the personal information volunteered. I have no reason to respect their privacy because I’m sick of catfish cowards who stink up the Internet.

I supported and voted for President Trump, will do so again and feel like dancing around the room every time he undoes something the left has imposed on us. I will not apologize for it and I will not be bullied into silence, just like I am done observing all of the perversities demanded I acquiesce to by immature punks and punkettes on the left.

And I suggest conservatives and Republicans do the same.

Barack Obama told his lemmings to get in our faces. It’s about time we stopped being polite with that “staying above it all” bullshit. Like, what has that gotten us aside from the left redefining “civility” on their terms?

Of course, I’m not calling for violence but I’m done being nice and respectful to those who are are disrespectful enough to pollute my air with their body odor. I don’t care about pussy hats, liberal celebrity musings, hypocritical politicians, sanctimonious cable news blowhards (none of whom I had any input as to their hiring), social media trends that are as meaningful as those Tide POD® eaters who create them. I will laugh at pride parades because there’s seldom anything visual that any respectable human being would be proud of. I will call out the indifferent fat-and-comfortables in nonprofits who are paid nicely to help veterans and the homeless, especially when they are fat and comfortable while veterans and the homeless are still ignored.