Democrat Racism: Hillary’s ‘They All Look Alike’ Comment No Surprise

We’re way past being tired of that old “had this been a Republican” lament when Democrats continue to say or do racist and/or inflammatory things and get that customary pass… if not a laugh. 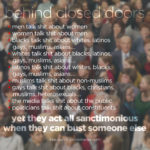 Seriously, listen again to the laughs from Hillary’s liberal audience. No groans of embarrassment, boos of outrage, nuthin’… just laughs. But let’s also be intellectually honest here: people talk shit about other people while in the comfort of their own so Hillary let her guard down and was probably being honest.

But again, this is nothing new. A clearly ignorant CNN commentator can stupidly associate #Antifa and their violence with black people and still have a job.

A liberal environmentalist Hollywood actor can wear blackface and still make millions, another can call Justice Clarence Thomas a “a clown in blackface sitting on the Supreme Court” and still make commercials while Megyn Kelly’s stupid blackface comments generated mass outrage and cost her a very lucrative job.

Hillary’s husband can make what would be considered very racist remarks and never be called on it.

A few years ago, this guy (Obama) would be getting us coffee.
— Bill Clinton, “Game Change”

They mention that he once had a fleeting association with the Ku Klux Klan, and what does that mean? I’ll tell you what it means. He was a country boy from the hills and hollows of West Virginia. He was trying to get elected. And maybe he did something he shouldn’t have done, and he spent the rest of his life making it up. And that’s what a good person does. There are no perfect people. There certainly are no perfect politicians.
— Bill Clinton, Robert Byrd funeral, 7/2/10

So ya had to be a Klan member to be elected by Democrats. What does that tell ya?

Democrats saying and doing racist things while accusing others is nothing new and at the looks of things, there will always be more to come.

Relative silence from the national news media is why they’re rightfully referred to as the #FakeNews media because, while covering for one party over another, that’s all they have left.