It all started with a Tweet and now President Trump is a racist for calling out the Democrat who cares more about illegal alien children than those in his failed metropolitan district.

The Maryland Democrat got emotional while discussing the conditions of detention facilities for migrants at the U.S.-Mexico border are being held in. Reading from a court document in which a federal judge found that Homeland Security “did a better job of tracking immigrants’ personal property than their children,” House Oversight Chairman Elijah Cummings repeatedly shut down McAleenan’s attempts to speak.

We won’t even get into Cummings’ party and their blatant disregard for children still in the womb.

But Democrats have now declared any criticism of an elected “person of color” racist in their ongoing practice of shutting down opposition instead of engaging in civil debate; usually debates they know they’ll lose and now pointing out the reality that is the City of Baltimore is also “racist”.

So what is that reality that is Baltimore? You just have to be able to count, look at what’s been going on there for years and the subsequent political blame has merit.

Fact: The last Republican mayor of Baltimore City left office in 1967. That is 48 years of unbroken Democrat control of the mayor’s office.
— Newt Gingrich, 5/18/15

What really seems to have the Democrats and their media crazed is the president’s pointing out their consistent homicide and rat-infestation problems; issues that would be intolerable in a white district controlled by any party. Problems that have been documented LONG before President Trump’s recent Tweets….

What’s emblematic of the hypocrisy of the left and their biased media which depends on the ignorance of those they’re supposed to be keeping informed, the very Baltimore Sun that’s been documenting their city’s morass for years is now attacking the president (and defending a congressmen who’s taken his constituents for granted and while leaving the district to fend for itself) for pointing out the reality in a few hundred characters and again… making it all about race.

It’s not hard to see what’s going on here. The congressman has been a thorn in this president’s side, and Mr. Trump sees attacking African American members of Congress as good politics, as it both warms the cockles of the white supremacists who love him and causes so many of the thoughtful people who don’t to scream. President Trump bad-mouthed Baltimore in order to make a point that the border camps are “clean, efficient & well run,” which, of course, they are not — unless you are fine with all the overcrowding, squalor, cages and deprivation to be found in what the Department of Homeland Security’s own inspector-general recently called “a ticking time bomb.”
— Baltimore Sun Editorial Board, 7/27/19

Baltimore’s problems are not unique, seem to appear in almost every black community in the United States and all have been controlled by Democrats for decades. Black politicians have promised much every election cycle and have delivered nothing; blaming the lack of progress on socio-economics, racism, Republicans… everything except for their lack of leadership.

And whatever you do, request input from the locals at your own peril…. 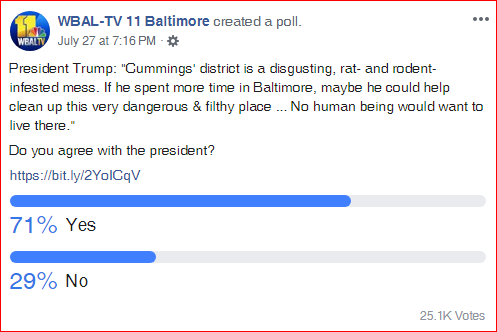 Pointing out systemic Democrat failures will accomplish nothing as the current strategy illustrates. Blame President Trump for the crime, rats and make it all about race. That way, Elijah Cummings and dozens of black Democrats (who represent the very districts they refuse to live in) can continue to do for their constituents what they’ve been doing for years.