Not that we’re basking in the knowledge that someone lost a job, especially in the journalism field where gainful potential employment isn’t reflected proportionately in the booming Trump economy, but if someone really botches their paid task and is widely-reported to have been fired, one would think it would be reflected online and rather quickly?

For those of us who take a minute to think before blindly aggregating, not so fast.

With regards to Newsweek’s Jessica Kwong, the case ironically could be made not to jump to premature conclusions.

It all started with her Thanksgiving piece written about President Trump…. 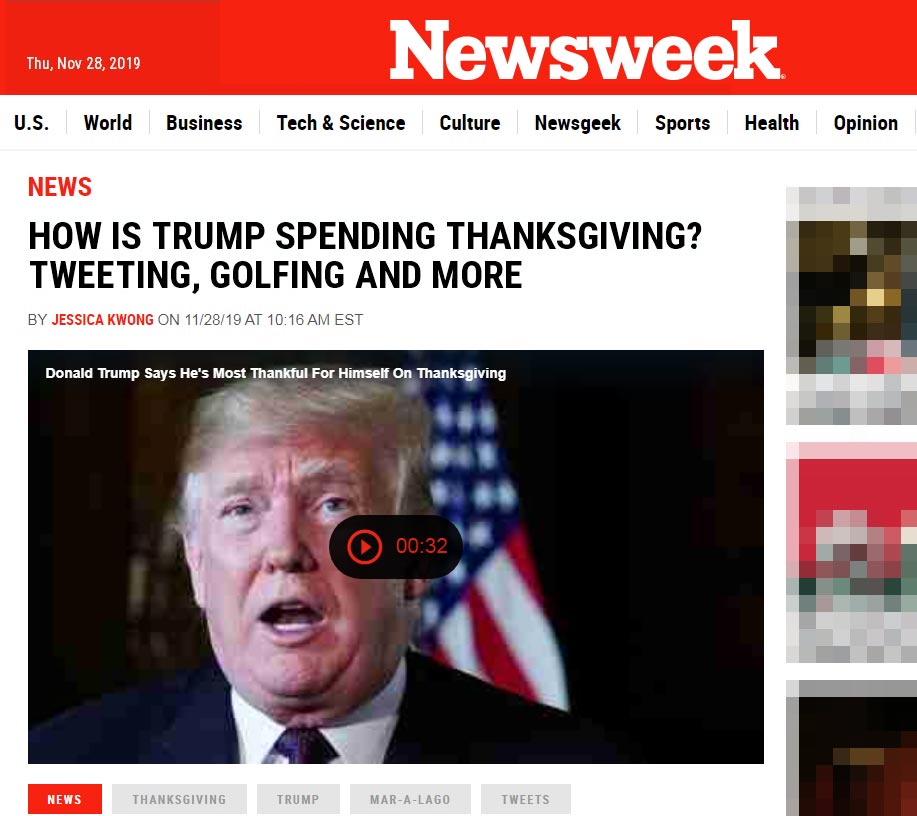 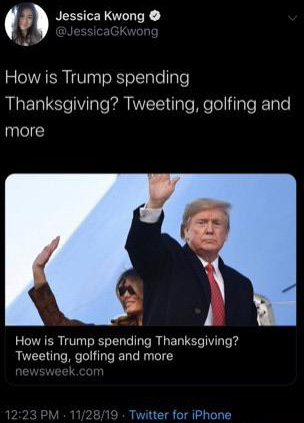 There’s one problem. President Trump went to Afghanistan to spend the Thanksgiving holiday with soldiers stationed there and failed to inform the media accordingly, for the obvious security reasons.

Newsweek had to do the quick dance to fix their published error. 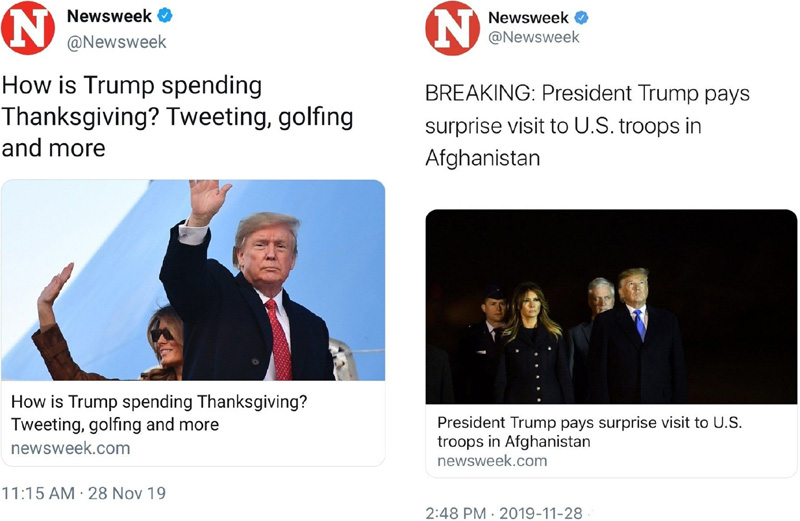 As a result of being the latest justified journalist laughingstock, Kwong attempted damage control. 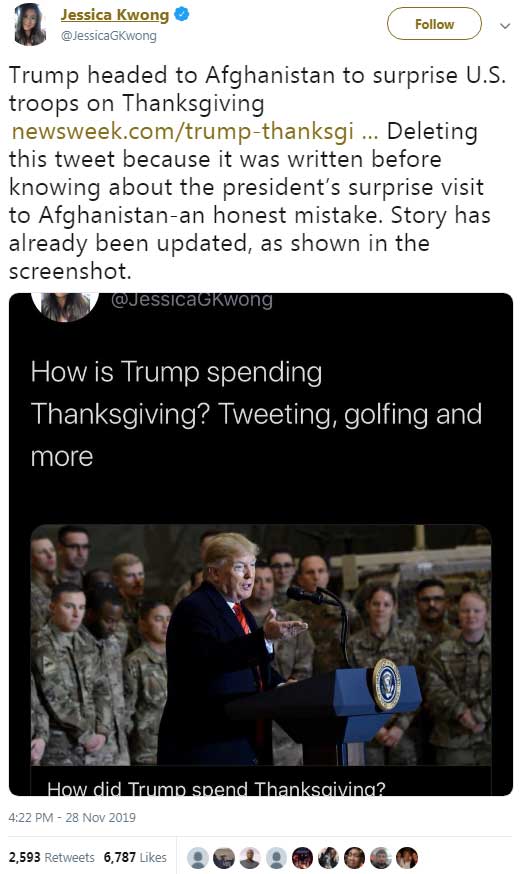 As evidenced by her pieces and social media comments, she consistently refers to the president as “Trump”, not “President Trump”; the initial indication of her lack of journalistic and professional impartiality which was allowed by her employer.

“Written before knowing” should be the avoidable lesson of this cautionary tale. Newsweek, publicly embarrassed that their reporter (making an “honest mistake”?) falsely accused the President of the United States of callous insensitivity over the holiday, assured us all that corrective measures had been taken.

Newsweek investigated the failures that led to the publication of the inaccurate report that President Trump spent Thanksgiving tweeting and golfing rather than visiting troops in Afghanistan. The story has been corrected, and the journalist responsible has been terminated. We will continue to review our processes and, if required, take further action.
— Newsweek representative to the Washington Examiner

So, how was the story “corrected”? When dealing with arrogant liberals who are quite reluctant to admit when they’re in error, actions don’t always match their words as evidenced by the fact the smarmy-but-tweaked headline is STILL up as of Saturday, November 30, 2019. 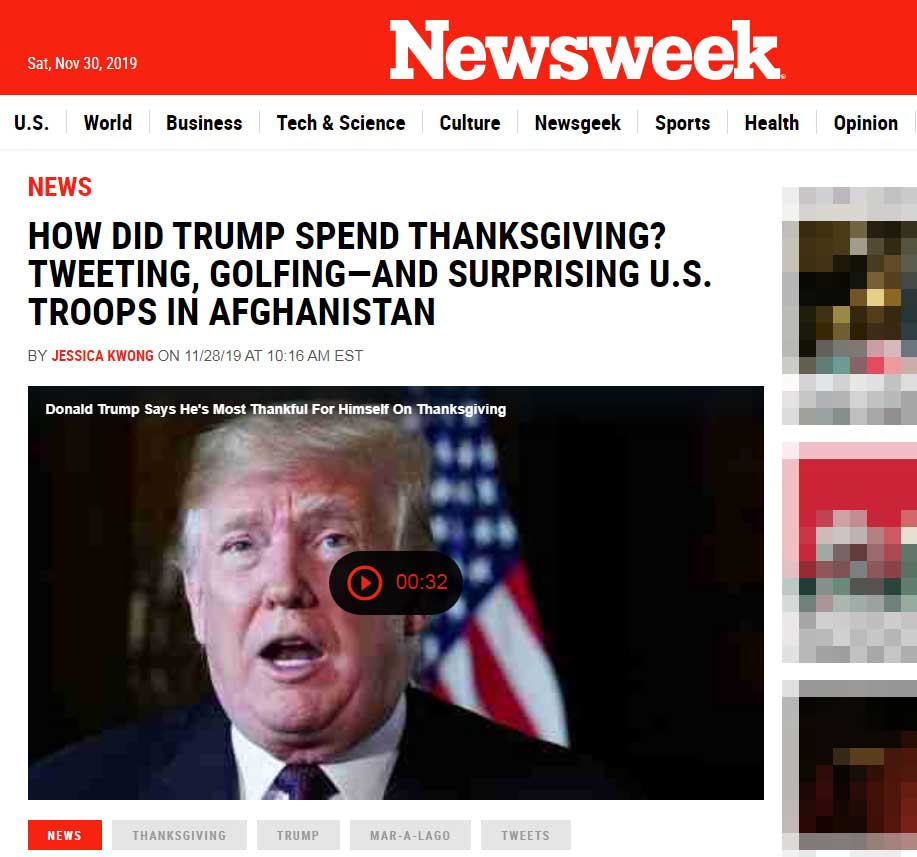 Not sure if there’s any visual evidence to prove President Trump actually golfed on Thanksgiving Day but we’re confident there’s clarification coming soon from Newsweek. The retraction/correction is also rather short, lame and lacking the remorse-on-overdrive we’d have seen had they done this to President Obama.

This story has been substantially updated and edited at 6:17 pm EST to reflect the president’s surprise trip to Afghanistan.
— Newsweek

If you believe Newsweek’s statement and the “journalist responsible has been terminated”, you’d never know it by some informal searching online.

Kwong is still listed as their staff writer. 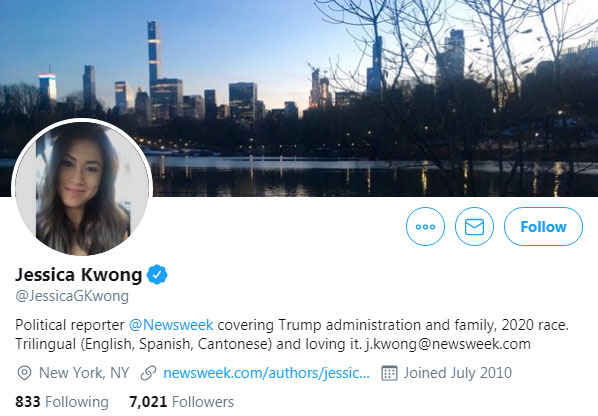 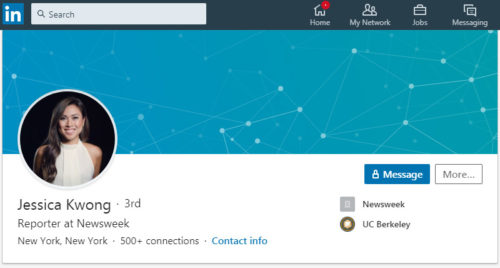 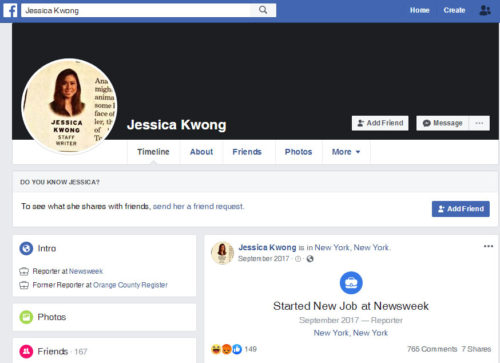 Jessica still lists herself as a “reporter” for Newsweek on social media. Either we have more ball-dropping on the part of Newsweek coupled with narcissistic denial in the case of Kwong, or something else may be afoot.

Jessica Kwong could be prepping a wrongful termination lawsuit, that is if she was actually fired, THIS was her first offense, and the customary counseling and/or formal warnings didn’t happen.

But there’s also something suspiciously missing.

Most responsible news organization don’t just give their reporters free rein to hit the publish button whenever the spirit moves them. Pieces are supposedly checked by editors and the fact that Jessica got sacked and the person who was supposed to remind her to verify (in this case) President Trump was at Mar-a-Lago “Tweeting, golfing” before publishing and was apparently spared is problematic at best. This should have been that mere part of the “processes” Newsweek mentioned.

Kwong, after making “an honest mistake” is now shifting the blame.

Kwong told the Washington Examiner that she was assigned to write a story on what Trump was doing on Thanksgiving. The next day, Kwong reached out to the editor on duty and relayed the president’s latest actions, after which the story was published. When the president’s trip to Afghanistan was announced, that editor then decided to assign another reporter to write a new story about it but neglected to update Kwong’s original piece in a timely manner.
— Washington Examiner, 11/30/19

Jessica Kwong should be fired because if you’re one of the extremely privileged to have been given the White House beat, that should come with the experience to know where lines are drawn, etiquette is respected and observed, understanding the over-importance of Journalism 1.01: verify, and if you blow it, you’re gone. No second chances or timeouts in the naughty corner.

Newsweek did not answer additional questions about the editor’s status with the outlet or if they would face any consequences over the publication of the story.

AND whoever was responsible for proofing and editing Kwong’s “work” should also be fired for all of the same reasons. If you terminate one, you’d better terminate both and seeing how neither can be independently verified, there’s no reason to take Newsweek at their word on this one either.

It looks like the hammer has belatedly come down.

Newsweek investigated the failures that led to the publication of the inaccurate report that President Trump spent Thanksgiving tweeting and golfing rather than visiting troops in Afghanistan. The story has been corrected, the reporter responsible was terminated and the editor was demoted. We will continue to review our processes and, if required, take further action.
— iMediaEthics, 12/2/19

Jessica Kwong managed to find a new home (with obviously relaxed standards) for her journalist excellence.