Many on the left are sharing a quote from Rush Limbaugh, appearing to denigrate his receipt of the “Medal of Freedom Award” from the President and First Lady after the State of the Union Address.

WASHINGTON — Saying his initial enthusiasm had faded after learning about the award’s history, conservative radio personality Rush Limbaugh conceded Wednesday that receiving the Presidential Medal of Freedom was less of an honor knowing it had been bestowed upon Rosa Parks and Maya Angelou, too. “While I understand this medal represents the highest civilian honor possible, I was a bit disconcerted to discover this morning that I share this distinction with both a civil rights icon and a poet who gave a voice to black Americans,” said Limbaugh, who explained that he hopes people don’t doubt his integrity as he joins the ranks of the award’s previous recipients, especially Cicely Tyson, Ralph Ellison, Archbishop Desmond Tutu, Stevie Wonder, and Willie Mays. “I almost sent it back. But instead I have decided to keep my Medal of Freedom and let it stand as a testament to my willingness to tolerate others. I hope my acceptance of it will go some way toward reclaiming this honor from the Martin Luther Kings and Nelson Mandelas of the world.” At press time, Limbaugh confirmed he felt more confident that the award meant something after learning it had also been given to Henry Kissinger and Strom Thurmond.

It didn’t take long for one the most virulent, left wing forums to share Limbaugh’s incendiary comments. 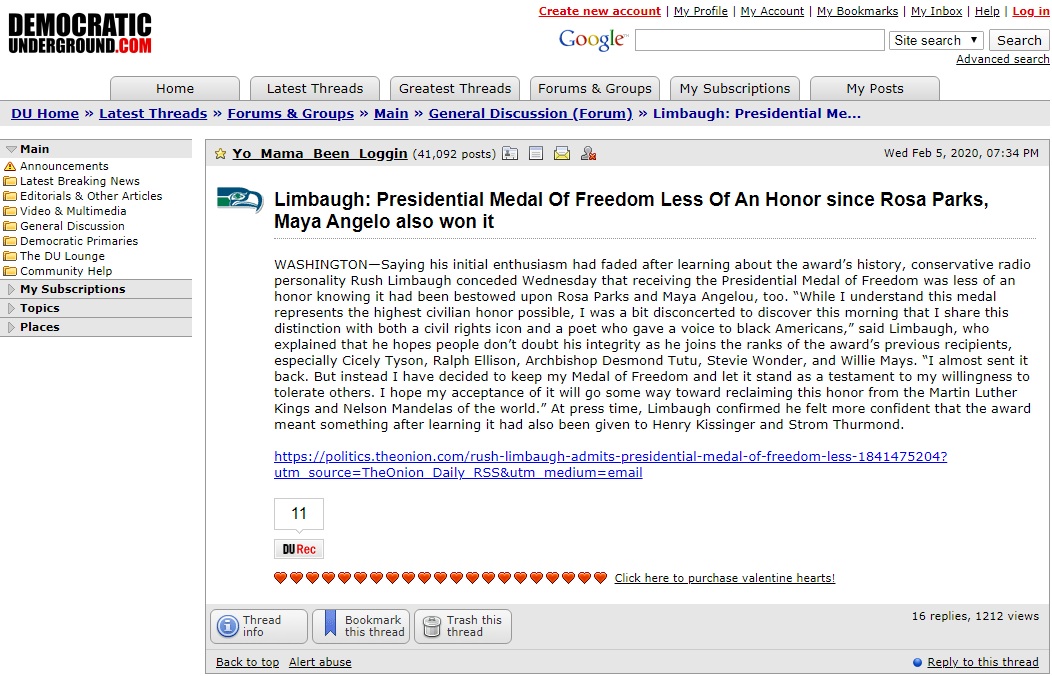 It took off from there.

Some of the outrage was targeted. 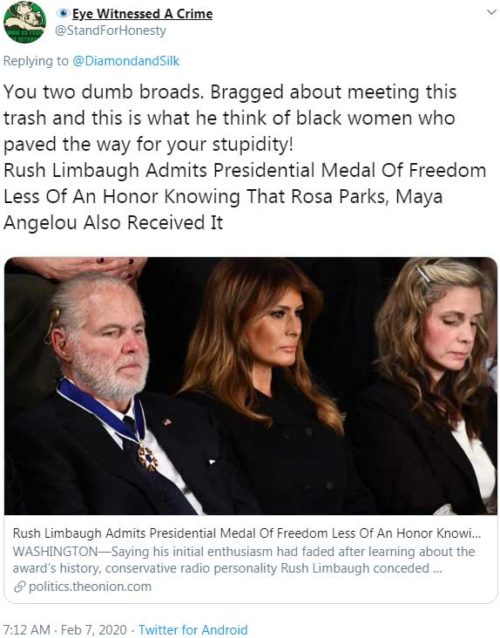 Social media got triggered and Limbaugh’s quote is being used to justify their hate for what the conservative icon stands for and conservatives in general. 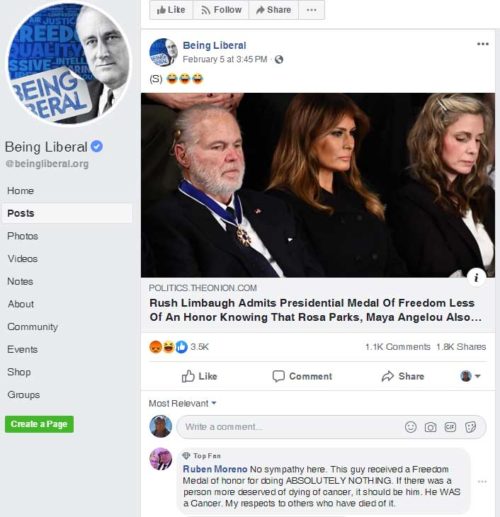 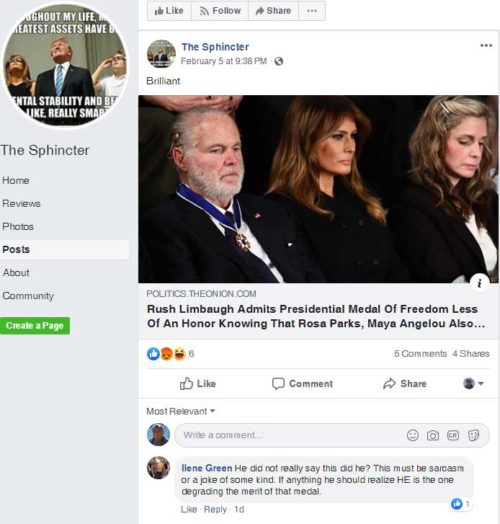 But there’s one teensie-weensie problem. Rush Limbaugh NEVER said those words and they came from one the Internet’s most popular parody websites, The Onion (which should have been the first uh-oh) and it’s amazing how many so-called “reputable” news sources has the following post in their news feeds…. 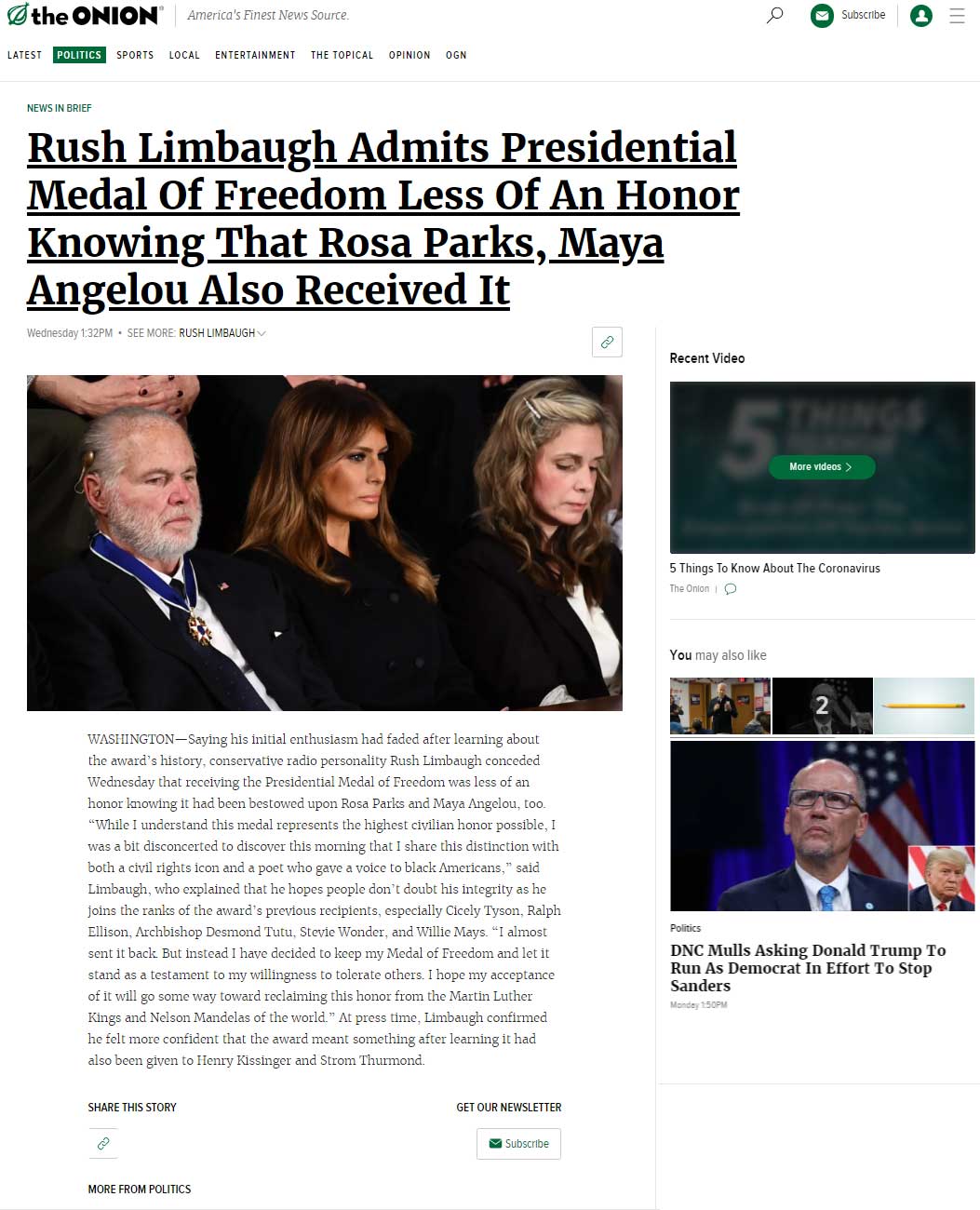 Even the progressive go-to Snopes couldn’t bring themselves to call it was it was: false. 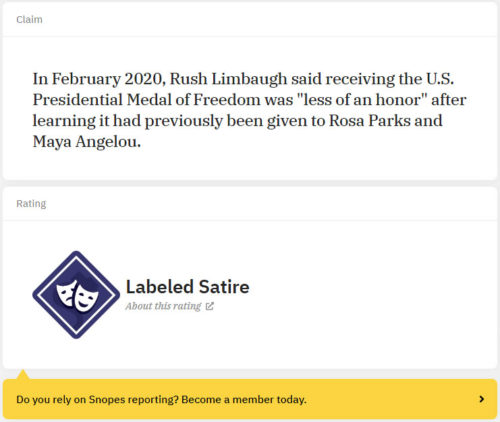 So, if you hear about this rather insensitive and racist quote from Rush, or have it thrown in your face by intellectually-superior liberals who were salivating at the opportunity to issue a got’cha, let them enjoy their moment of gullibility and then send them the following link.

If you don’t get a response, you’ll know stupid hit the wall.