General Mark Milley Violated the UCMJ in ‘Apologizing’ Against Trump

The left and their media normally hates the military. They openly disparaged our soldiers during the Vietnam War, Cold War, Gulf War, Iraq War, war in Afghanistan, and war against ISIS.

But let a general publicly apologize for obeying a lawful order from President Trump, and let the liberal love fly!

As senior leaders, everything you do will be closely watched. And I am not immune. As many of you saw, the result of the photograph of me at Lafayette Square last week. That sparked a national debate about the role of the military in civil society. I should not have been there. My presence in that moment and in that environment created a perception of the military involved in domestic politics. As a commissioned uniformed officer, it was a mistake that I have learned from, and I sincerely hope we all can learn from it.
— Gen. Mark Milley, the chairman of the Joint Chiefs of Staff, pre-recorded speech to a group of graduates from the National Defense University

Those of us who’ve served know what could happen to any of us if we said anything bad about the Commander-in-Chief while we were on active duty. We were all subject to the rules and/or penalties under the Uniform Code of Military Justice (UCMJ). Rules and penalties are rather specific for officers, especially in this case.

And the reasons are obvious.

The main reason for this regulation is to keep military members who have access to major weapons of war to ever get involved in politics. Once they are retired or resigned their commission and a civilian citizen, they may partake in such political arguments in both written or spoken word.
— UCMJ Article 88 – Contempt Toward Officials

Had ANY of us, while on active duty, talked openly and our words were easily interpreted as having an issue with an action performed, standing right next to the Commander-in-Chief, a general like Mark Milley would be the first to have us relieved from duty, lose our liberty (ability to leave a base or ship), and await punishment that could result in a court-martial, possible dishonorable discharge, and loss of all post-military benefits only after possible incarceration. 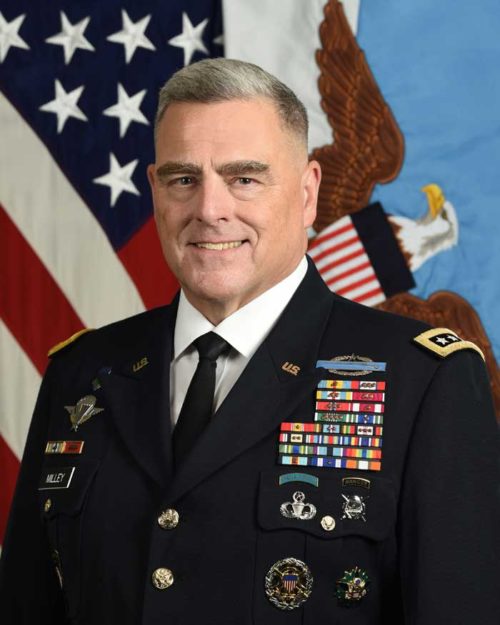 General Milley may have contracted the #BlackLivesMatter #woke disease but he’s still on active duty. The rules still do apply to him. In the real world, some of us know that the higher the officer, the more asses are kissed around him and some officers can get real full of themselves. The comments made to National Defense University graduates was all about him, how he felt, and what he should have done.

But we ARE talking about the #swamp and the Pentagon is within the boundaries.

Officials within the Department of Justice and Federal Bureau of Investigation activity worked to sabotage the Trump transition and Administration. Had any of us done this we’d be in jail for a very, very long time, yet they are ALL still walking the street, making good money as cable news contributors while also enjoying government pensions.

And now, the top military officers can publicly comment in ways that will be used to damage the Commander-in-Chief. Do you think anything will happen to General Milley? Yes, President Trump has fired many people and Milley could be next, but if he isn’t it won’t be a shock.

There is a two-tier system on Capitol Hill. Federal employees can break the law and smile. It looks like the military is now officially part of the #Resistance and we all know how ugly this can get.