There are many New England Patriots and Boston sports fans who live outside of the local New England broadcast area. (Thanks to Al Gore’s greatest invention, the Internet, we’re able to listen to local sports radio, even if Alexa doesn’t understand “Boston WEEI”.)

We finally got Alexa to tune into the right “WEEI”, and then we heard two Democrat windbags bashing President Trump, the false missile alert in Hawaii, the ridiculous new American embassy in England, birth control access, Trenni’s vagina, her boyfriend and her mother’s diaphragm.

Evidently Trenni Kusnierek and John Tomase, “Trenni and Tomase”, don’t care so much about sports and feel entitled to use their platform to assault their listeners.

As you listen to the following segment, remember, this is supposed to be a “sports talk” program….

BTW — For all those Patriots-are-cheaters haters, thank Tomase for his debunked contribution to #fakenews and smearing an NFL organization. 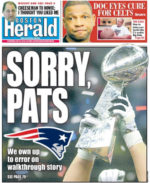 The Boston Herald sports writer who reported the New England Patriots taped a pre-Super Bowl walkthrough by the St. Louis Rams in 2002 said he will regret the erroneous story for the rest of his life.

“First and foremost, this is about a writer breaking one of the cardinal rules of journalism. I failed to keep challenging what I had been told. I should not have written the story without seeing the tape or getting multiple, firsthand confirmations from members of the organization,” wrote John Tomase in Friday’s editions of the newspaper.
— NFL.com, 5/16/08

Well, duh. Mike Barnacle and John Tomase prove, despite plagiarism or gross negligence, as long as you’re a liberal, you’ll always have a job in their media despite how much collateral damage is done.

As evidenced by the many liberal media platforms that exist, despite consistent under-performing, there’s visual evidence that Trenni and Thomas aren’t carrying their weight. For example, a lo-res video interview with the new Red Sox manager from February 7, 2018 that as of the following September that has a whopping 41 views? 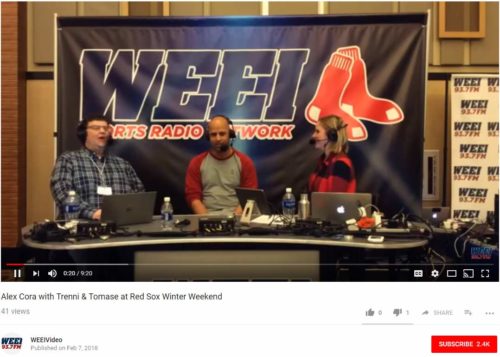 Little kids do better than that.

Our now ‘deeply divided’ post-Obama country is a direct result of the Democrats refusal to respect our “democratic” 2016 election results. As is always the case when a Republican occupies the White House, liberals have now rediscovered morals, ethics, “fact-checking”. Where’s an order for protection from Democrats when Americans need one?

It’s okay for the Democrat media and Democrat “sports journalists” to be “mean” and troll their listeners; it’s par for their course and the only feedback they’ll possibly read is on social media. Trenni and Tomase use their so-called sports program for their sad anti-Republican rants to this day.