A video by some researchers was shared on Twitter and the crack down in response was swift. 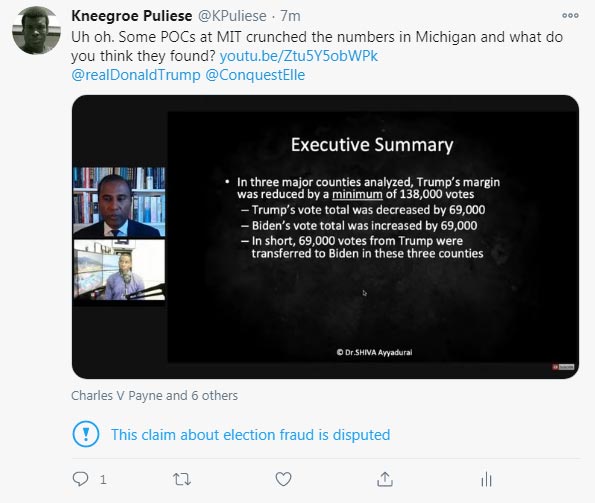 Heaven forbid a couple of brown guys dare contradict the media narrative that there still is “no evidence of widespread voter fraud” in the 2020 election.

Dr. V.A. Shiva Ayyadurai, the inventor of email and polymath, holds four degrees from MIT, is a world-renowned systems scientist, inventor and entrepreneur. He is a Fulbright Scholar, Lemelson-MIT Awards Finalist, India’s First Outstanding Scientist and Technologist of Indian Origin, Westinghouse Science Talent Honors Award recipient, and a nominee for the U.S. National Medal of Technology and Innovation.

In 1978, as a precocious 14-year-old, after completing a special program in computer science at the Courant Institute of Mathematical Science at NYU, Ayyadurai was recruited by the University of Medicine and Dentistry of New Jersey (UMDNJ) as a Research Fellow, where he developed the first electronic emulation of the entire interoffice mail system (Inbox, Outbox, Folders, Address Book, Memo, etc.), which he named “EMAIL,” to invent the world’s first email system, resulting in him being awarded the first United States Copyright for Email, Computer Program for Electronic Mail System, at a time when Copyright was the only protection for software inventions.

Yeah, Dr. Shiva needs to be fact-checked. And here’s where things get really problematic… participant Bennie Smith is a Democrat.

Commissioner Bennie Smith was appointed to the Shelby County Election in April 2019. He works in analytics and innovation at FedEx Express.

Smith has a passion for election transparency, serves on the Technical Advisory Team for SMART Elections and is most known locally for his micro-targeting application and predictive analytics method to forecast voter turnout. Smith is most known nationally for a proof of concept application he developed and a research series he participated in to examine election system vulnerabilities. Smith’s research uncovered an extraordinarily high-risk tampering mechanism and ultimately provided a new infrastructure for analyzing questionable election results. Smith’s work has been referenced in congressional hearings, cited as the ground work for the Ballot Images Project, and has been presented to Secretaries of States, US Congress Representatives and a number of Election integrity organizations and communication mediums.

They basically proved if it could be done in a few Michigan counties, it could be WIDESPREAD!