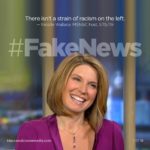 Appearances matter and when a far-left cable channel trots out “not a practicing Republican” Nicolle Wallace and Republican-turned-independent Steve Schmidt to speak for conservatives, it should be yet another reminder of how poor the vetting process on the conservative side continues to be.

Wallace worked for squishy Republicans who either capitulated to Democrats or lost their campaigns altogether. George W. Bush, John McCain… tells you all you need to know before landing at MSNBC where she continues to suck up to her leftist employer and disparage conservatives to this day. Schmidt sucks off the nonprofit money well as founding member of The Lincoln Project and visually throws that lifestyle in our faces.

And now they’ve come out, guns a-blazin’, taking aim and slandering those who voted for President Trump.

Like most of the blabbers who can find a seat behind a microphone (and unlike Donald Trump), very few of these people have created anything of value that anyone wants to buy, fewer have ever put their names on the line and run for public office, and have relied on taxpayer-funded paychecks for most of their political “careers”.

This Independent voter will be aligned with the only party left in America that stands for what is right and decent and remains fidelitous to our Republic, objective truth, the rule of law and our Allies. That party is the Democratic Party.
— Steve Schmidt, 6/20/18

As we’re seeing more and more, too many of the pundit class’ “values” are malleable to whomever pays their opulent salaries.