Let’s be real from the onset: liberals have always wanted conservative Republicans dead because that would save them the hassle of defeating them at the ballot box, and they’ve publicly said so long before social media made it more convenient.

You know, I hope his wife feeds him lots of eggs and butter and he dies early like many black men do, of heart disease.
— Julianne Malveaux, columnist, radio host on Clarence Thomas, 11/4/94

With that, you’d think liberal Democrats would want conservative Republicans to remain unvaccinated so we’d all die horrible deaths. And don’t believe the rationale that conservatives getting vaxxed will save everyone’s lives, including theirs. It’s not like they can’t keep wearing their masks; you know, the lifesaving shields they initially mandated while cavalierly discarding their bio-hazard coverings on the street.

One can only imagine the mental contortions going on in the heads of the left, especially given the constantly evolving information issued by the CDC, governors, mayors, federal and state “health officials”, and even the President of the United States during a CNN Town Hall with Don Lemon.

You’re not going to get COVID if you have these vaccinations.
— President Joe Biden, 7/21/21

The Rev. Jesse Jackson, a famed civil rights leader and two-time presidential candidate, and his wife, Jacqueline, have been hospitalized after testing positive for COVID-19, according to a statement Saturday. Jesse Jackson, 79, is vaccinated against the virus and received his first dose in January during a publicized event as he urged others to receive the inoculation as soon as possible.
— ABC News, 8/22/21

While that was rather definitive yet later dismissed/corrected as another Joe-being-Joe senior moment, it’s still being demanded that the unvaccinated “follow the science”. But remember when we were told that we must follow the science because there’s consensus? Remember Barack Obama declaring, numerous times, climate change being real because “97%” of scientists said so even though they didn’t…?

When it comes to the efficacy of coronavirus vaccines, despite the insistence/assurance of Dr. Anthony Fauci, there is no medical consensus.

If you venture forth and perform rather simple searches beyond Facebook, Twitter, and Google censors, you’ll see many posts and videos from actual doctors, scientists and drug developers who declare, without hesitation, that the vaccines are unsafe, provide pretty easy-to-understand evidence and those not bound by our regulations have been able to sue for damages.

Bet’cha you won’t hear about this on CNN, MSNBC, Fox News, etc. The obvious question would be why are we handcuffed by the “emergency authorization” that immunizes vaccine developers so those injured by the jab will never be made whole?

It’s clear there’s no “consensus” despite the dictates coming from cable news hosts, pundits, and politicians that the unvaccinated obey and get the jab. You can also understand vaccine hesitancy after being told to accept medical advice from non-medical professionals like Harris Faulkner or Anderson Cooper and the pundit, bully class, while no one whose face appears on our televisions or radios can refer to ONE Phase 4 long term side effect study on any of the vaccines purely because of the physical lack of time required to conduct them.

Normally Phase 4 studies are released after the Phase 3 trials have concluded (anywhere between six and ten years) .

The world is currently in Phase 3…. 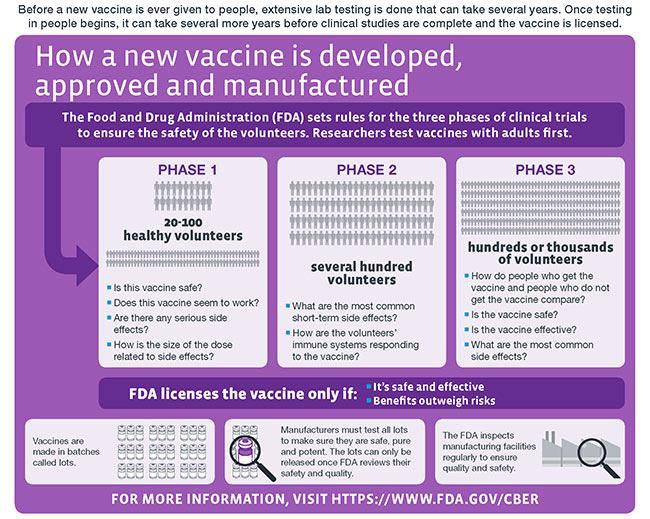 Unbeknownst to the arrogant vaccinated who are happily demonizing the unvaxxed, THEY are the Phase 3 “volunteers” because they consciously chose to receive the vaccine. But you can’t really blame them for not reading the fine print on the vaccine packaging because there isn’t any.

A convenient excuse provided by anonymous online “fact checkers” and a Johnson & Johnson “director of global corporate media relations” but highly irregular given coronavirus vaccines are the only drug we can remember that doesn’t readily share the upside with the downside. Watch any drug commercial on television where the second half discloses some of the possible unpleasant side effects (of varying degrees up to and including death). COVID-19 vaccine side effects and the moving of goalposts continue to be issued on a drip-and-drab basis.

So, we get new alarming tidbits like this on a near daily basis because we’re currently in fact-finding Phase 3.

Despite inconvenient speed bumps, the push is on and it will get more intense once the FDA finally issues their seal of approval on any vaccine. The ongoing justification is that the unvaccinated are to blame for the COVID-19 mutations that’s now causing the vaccinated to contract the very virus they were assured they’d be immune from because they obeyed.

But, what if it’s more than that?

There are online sources that are, as best they can, keeping tallies of the “adverse side effects” and deaths cause by COVID-19 vaccines, even though it’s acknowledged that sites like VAERS can only keep count of a small percentage of actual incidents because they are voluntarily entered, and given the lockstep messaging coming from the government and media, there’s no way to know the actual number of vaccination casualties.

It should also be noted that the 12,791 deaths related to Covid-19 vaccines reported on VAERS over the period of 8 months, compares to 8,966 deaths related to all other vaccines reported on VAERS since the inception of VAERS – a period of 31 years. And this does not raise alarm bells within your agencies, or cause you to reconsider assembling an independent safety panel of outside experts?
— Senator Ron Johnson (R-WI), 8/22/21

But back to the original point: if liberals hate conservatives, many to this day openly want us dead, hate the unvaccinated and are now contracting the virus despite the assurance of Saint Fauci, do they really want to save the unvaccinated or do they want the disobedient to have to suffer the same fate of they unknown they do? 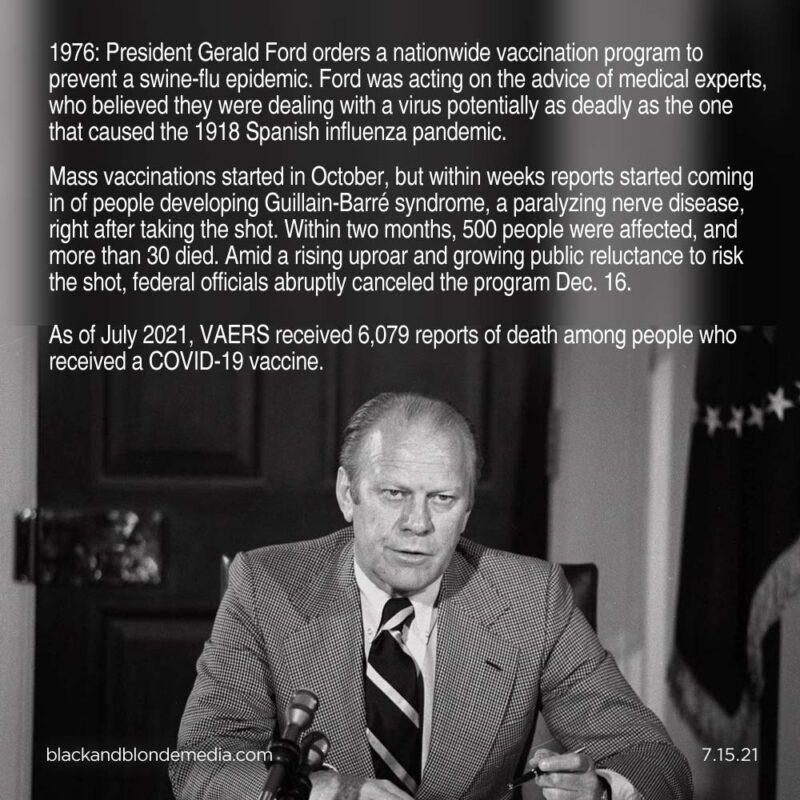 This we DO know: the vaccines may alter human DNA, mess with the very immune system God gave us to ward of viruses, and change the shape of blood cells causing the numerous reports of blood clots. Once you take the vaccine, you are at the mercy of “variants” and later those who suggest new and improved “booster” shots will fix what was undone by those pesky mutations. You can’t walk that back, it seems obvious that the vaccinated may have internal remorse for voluntarily subjecting their bodies to the unknown just because they were on the preferred side of peer pressure, and now they want those who had the audacity to resist be punished with the daily fear they now have to endure.

Of course, leftist lemmings conveniently ignore the political and/or entertainment elite who arrogantly and consistently break the same mask mandates they demand and impose on a defenseless public. It’s like THEY know something we all don’t, considering they have Americans jumping as high as they want over something no one can see, smell or touch.

If you absorb the emotional messaging of the vaccinated vice the tempered, logic of the doctors warning against it, you can see why the vaccinated are acting like those Titanic passengers in the freezing waters of the Atlantic Ocean who have no life jacket. Those are the people you want to help but need to stay clear of because, in their final moments of self-preservation panic, would push you down to save themselves.

It’s understandable why they’re so irrational and devoid of common sense. 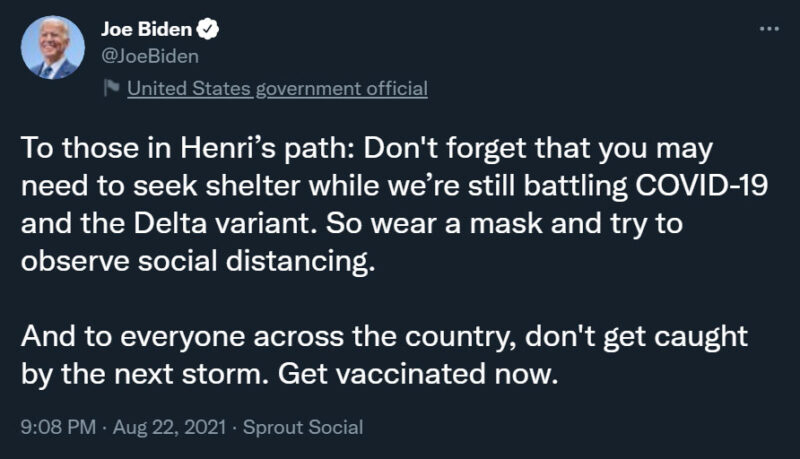 We’re talking about crazed liberals who may now want to see ill happen to others who didn’t do something they now know may have been a very dumb decision: one they will never be able to reverse.

It took over two years of vaccinated bullying and censorship but when the truth became uncomfortable enough to defend, the intolerant declared it time for a truce. 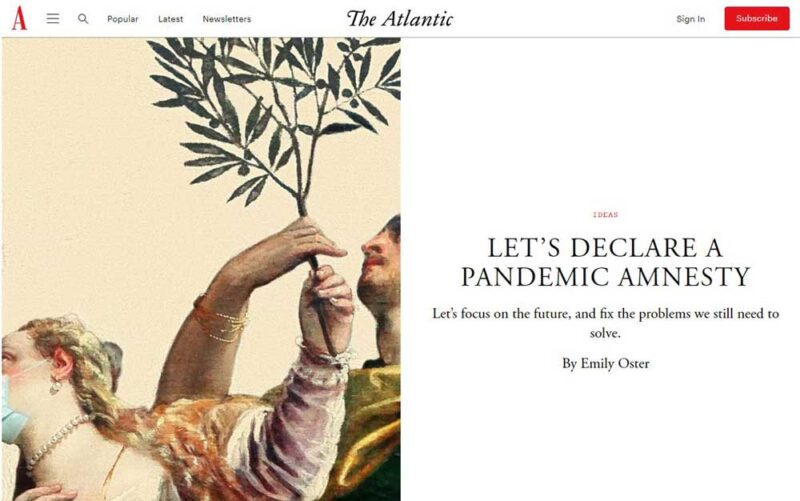 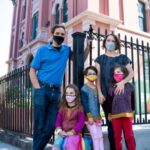 The people who got it right, for whatever reason, may want to gloat. Those who got it wrong, for whatever reason, may feel defensive and retrench into a position that doesn’t accord with the facts. All of this gloating and defensiveness continues to gobble up a lot of social energy and to drive the culture wars, especially on the internet. These discussions are heated, unpleasant and, ultimately, unproductive. In the face of so much uncertainty, getting something right had a hefty element of luck. And, similarly, getting something wrong wasn’t a moral failing. Treating pandemic choices as a scorecard on which some people racked up more points than others is preventing us from moving forward.

We have to put these fights aside and declare a pandemic amnesty. We can leave out the willful purveyors of actual misinformation while forgiving the hard calls that people had no choice but to make with imperfect knowledge.

The standard saying is that those who forget history are doomed to repeat it. But dwelling on the mistakes of history can lead to a repetitive doom loop as well. Let’s acknowledge that we made complicated choices in the face of deep uncertainty, and then try to work together to build back and move forward.
— The Atlantic, 10/31/22

It would be nice to let bygones be bygones, take the high road, forgive and forget, live and let live, yada yada, but there are millions of Americans, not to mention even more around the world, who were mocked, vilified, discriminated against, prosecuted, had their bank accounts frozen, fired from jobs, put out of business, just because they dared use common sense and question the dictates of politicized health officials and media talking heads with zero medical experience. An untold number of Americans alone were blackmailed into getting vaccinated in order to make a living or see loved ones in medical facilities or nursing homes, and religious exemptions were vindictively ignored.

Call it gloating or a belated bitch slap for all those who got in our faces, demanded we be silent because we were “killing people” but the only people now “suddenly dying” at an increased rate are those who acquiesced to the fear pushed by cable news pundits and partisan government lifers.

We will only repeat history if we again do what is now demanded and forgive those who were wrong and act like it never happened. These people need be forcefully reminded that their words and deeds contributed to the vaccine genocide that all those who are not pure blood will have to worry about for the rest of their lives. Their fears and concerns are not something we all must share just because THEY are the ones affected. They brought it on themselves and they must be reminded of this every day so they aren’t allowed to ever do this again.