Projecting on Patriots Fans, Liberal Sportswriters Are the Real Racists

We’re past the two-third point in this COVID-battered NFL season and New England Patriots beat writers have already deemed the Cam Newton quarterback acquisition as a failure and are looking towards a Jared Stidham future.

Among the topics this week: Should Jarrett Stidham get a real chance to prove himself? Can the Patriots continue their dominance over the Chargers? And who’s a potential unsung hero for New England if its to make a playoff push?
— NBC Sports Boston, 12/4/20

Both the New England-departed Tom Brady and his Newton replacement have one thing in common: both have storied careers on only one team (29 combined years) before the start of this season and both are visibly struggling in their new systems. Coronavirus has created a disruption of long-standing offseason routines and good teams always take time to gel. Both quarterbacks are trying to make the best of their current situations.

Cam Newton doesn’t have the total luxury Tom Brady has in Tampa Bay where an offense has been exclusively restructured and players acquired to fit his skill set. Newton’s talents are being molded and exploited into the Patriot Way with the salary cap-limited roster he has to work with. It clearly hasn’t been smooth sailing, too many in the media intelligentsia are quick to second guess greatest-of-all-time coach Bill Belichick and are loudly calling for the second string quarterback to be given the starting role for the rest of the season.

Why the media’s short leash on Newton and essentially throw in the towel on the rest of the season?

Anyone who’s consumed Boston sports media knows they’ve had an issue with Cam Newton from the time he was belatedly signed by the Patriots. Many said he wouldn’t fit in with the system, he was too flamboyant, he wasn’t a team player, and underneath it all they also issued a nuanced condemnation of Patriots Nation: a former league MVP might not be accepted in New England because he’s black.

Take 5 with Chris Gasper: Is Boston ready for Cam Newton to be the face of the New England Patriots?
— WCVB 5 Boston, 7/27/20

Cam Newton: Being an unapologetic Black QB is why media doubted ability to mesh with Bill Belichick
— MassLive, 9/7/20

Cam Newton explains to the Greg Hill Show challenges of living life as a black quarterback in the NFL over the years
— WEEI Boston, 9/28/20

While we’ve never had the honor of meeting Cam Newton, I’m pretty sure he accepted the deal to come and become the quarterback of the New England Patriots; NOT the black quarterback of the New England Patriots. In fact, during his brief tenure in a Patriots uniform, the only comments I’ve heard or read remarking on Newton’s skin color are from those in the local and national sports media.

But in their desire to be heard by the team’s hierarchy, they’ve collectively determined that’s it’s time to forfeit the rest of this season (if not now, going into next year) and move onto a relatively unproven commodity, only buttressed by their superior believe that questions if Cam was ever intellectually capable of grasping a playbook that near-totally evolves from week to week.

The one of the Boston sports intelligentsia officially made his call on Newton….

OK, that’s enough. You tried. We tried. It’s not working. It’s not you Cam, it’s us. Actually, it is you. And we’re concerned about us watching you play quarterback for the Patriots past the point where you are contractually tied to them. So after January 3, clean break. For one season – a season the likes of which we will never see again (dear God, let that be true) – Cam Newton has been the perfect band-aid.
— Tom Curran, 11/30/20

Seeing how the Patriots organization didn’t acknowledge accordingly, there was a double-down. 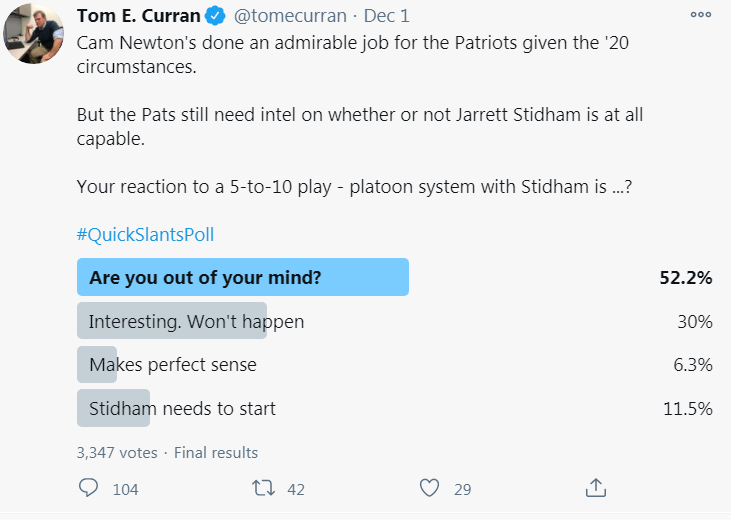 If Brady was still with the Patriots and the season was playing out with the team battling for playoff relevance going into Week 13, do you really think sports mouths like Tom Curran would be sizing up public opinion for a partial benching of the GOAT in favor of sharing playing time essentially with a rookie? Okay, yes. There have been many times over the last few years where the Patriots got off to rocky starts and there were audibles for the aged Brady to be benched.

Those premature evaluations were ignored by Coach Belichick and the Patriots went on to win a few more Super Bowls.

Not saying that will happen this year, but at least Tom Brady and the team were allowed to get it together. The Boston sports media should give another future Hall of Fame quarterback the same time and opportunity to succeed or fail.

Whether the Patriots will soon make a change at quarterback, and other thoughts
— Boston Globe, 12/5/20

Unless there’s a reason why they won’t….