There was this master chief of Southeast Asian descent on the USS Midway who had a routine, that on numerous occasions, he directed to his American sailor subordinates. He would grab the tip of his collar, the shiny brass insignia just above his fingertips, and declare…

It was obvious to all, given his background, that he relished any and every opportunity to put an American in his place knowing nothing would be done about it.

New York Congresswoman Nydia Velázquez, current Chair of the House Small Business Committee, gives off that same vibe. Granted her academic and activist background is more substantial than the master chief’s, but her elevation to committee chair has clearly gone to her head. 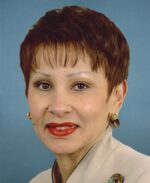 Rep. Velázquez checks off all the boxes, not because of her expertise in finance, but because of identity politics.

For such an accomplished academic and even “adjunct professor of Puerto Rican studies at Hunter College”, the wisdom for placing her on a small business committee could have been questioned early on.

Should Republicans retake the House in 2022, it will be interesting to see how Rep. Velázquez adjusts to a diminished minority role where she may be reminded that she’s no longer in charge and can be shut up according to established rules and maybe even some just made up.

Stand by for THAT video exchange….