In the latest poke in the eye to those who oppose the woke agenda run amok, the Norwegian Postal Service (Posten) released a long-form advertisement that establishes Santa Claus is… gay. 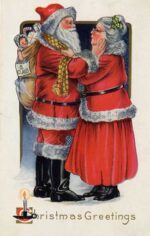 If one is to accept this concept, the logical next question is where is Mrs. Claus? Either the world has been lied to for decades about her heterosexual wedded status to Santa or the ad is a blatant lie.

Mrs. Claus (also known as Mrs. Santa Claus) is the legendary wife of Santa Claus, the Christmas gift-bringer in Western Christmas tradition. She is known for making cookies with the elves, caring for the reindeer, and preparing toys with her husband.
— Wikipedia

It’s amazing that at a time when delivering the mail is becoming more expensive and on-time delivery is problematic, there’s still enough taxpayer money set aside to produce expensive visuals and perpetuate narratives that are more meant to enrage than enlighten.