They vote for Democrats. They promote policies that negatively impact Americans but they can afford to endure. They support causes that imperil the law-abiding in favor of the social justice criminal class. They blindly supported the activists, as long as the “mostly peaceful” protests stayed over there.

Now that crime, promoted by those campaigns they donated heavily to, has reached their doorsteps, it’s an emergency.

Private security contractors report that a recent string of high-profile retail robberies and home burglaries in upscale Los Angeles neighborhoods has caused a dramatic uptick in requests for their services and prompted many of their wealthy clients to change their routines out of a mix of caution and fear.

Living in fear because of the political motives of others really sucks, especially when property and lives are at risk.

Recent high-profile crimes involving the entertainment community include the Oct. 27 robbery of the Encino home of Real Housewives of Beverly Hills star Dorit Kemsley, resulting in the theft of $1 million in luxury handbags, jewelry, watches and other goods. Actor and former BET host Terrence Jenkins escaped a robbery attempt by a masked crew near his Sherman Oaks home on Nov. 10. 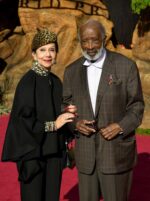 Then Hollywood was shaken by the fatal shooting of 81-year-old philanthropist Jacqueline Avant (wife of legendary music exec Clarence Avant and mother-in-law to Netflix’s Ted Sarandos) during an attempted burglary at her Trousdale Estates home on Dec. 1; the perpetrator, recently paroled from state prison, was charged with her murder on Dec. 6.

High-profile heists have also occurred in the Fairfax district, where suspects in police-like uniforms followed victims from a restaurant, and in Hancock Park, where two men robbed a mother with her baby. Armed robbers crashed a holiday party in Pacific Palisades on Dec. 3 to strip revelers of jewelry, iPhones and an Apple watch. On Dec. 7, thieves heisted about $100,000 worth of jewelry and goods from guests held at gunpoint outside the InterContinental Los Angeles Downtown. And on the evening of Dec. 20, a man was arrested for attempting to burglarize a Bel Air mansion.

The case could be made had these know-it-all “celebrities” voted for politicians and activists who really had the public’s best interest in mind, none of this would be necessary and millions in property damage and lives would have been spared… including theirs.

With a majority of clients in Bel Air, Beverly Hills, Pacific Palisades and Brentwood, ACS Security has seen an uptick of “about 50 percent” in calls and special patrol services in the past few weeks, says field marketing manager, Elizabeth Chyr. Many clients of SSA Security Group (which services the Palisades, Holmby Hills, Brentwood, Santa Monica and Westwood) are “asking for extra patrol,” says executive senior vice president Terry Segraves, adding that the rate of new client intake is up significantly — “we already have 12 new clients in December.”

Sadly, the majority of the American people don’t have the disposable means to hire personal security squads or renovate their homes to include safe rooms. We just have to live with the ramifications of policy-makers the Hollywood crowd donate massively to.

Estate manager Bryan Peele, president and founder of the L.A.-based Estate Managers Coalition, told THR that his clients have “fully equipped safe rooms that they can live in for a few days, if necessary, that are completely hard-wired with phone cables, Internet, everything.”

One of Peele’s clients has purchased three bullet-proof cars in the last couple of months, while another located a company in London to replicate his luxury watches. “This guy will take a $200,000 Rolex and copy it, using stainless steel and other metals, so it looks like the original but costs maybe $2,000-$3,000 per watch. So, in the event that it’s stolen, the client is out a lot less money,” says Peele.

None of these people will admit they brought this crime plague down around all of us. Instead, they’ll just hunker down while it creates the intended tumult outside of their neighborhoods.

Some are taking firearm and self-defense classes, while enrolling staff in security training. “We even have one client in Brentwood that has security detail follow the kids to playdates and follow the housekeeper when she’s walking the pets,” says Peele.

Entertainment business manager John McIlwee of McIlwee & Associates — whose clients include Jane Lynch and director Matt Reeves — told THR that in the past weeks he has been reviewing insurance policies, sending reminders to use alarm systems, and adding in armed patrols.

These are the same people who’d have our Second Amendment right diminished while you can’t watch any primetime television without a depiction of a couple homicides by firearm. And while retail outlets in poorer neighborhoods are moving out due to the shoplifting sprees that result in no arrests, those thieves messed with the stores the special people frequent and that’s a problem.

In the retail realm, eleven smash-and-grab robberies in Los Angeles, from Nov. 18 through Nov. 28, involved over $338,000 worth of goods and more than $40,000 in property damage. Targeted stores include Nordstrom at the Grove shopping center (where at least 18 thieves used sledgehammers and an electric bicycle to smash through windows), Nordstrom at the Westfield Topanga & The Village shopping center in Canoga Park (where a security guard was assaulted with bear spray), Ksubi on South La Brea Avenue, Bottega Veneta on Melrose Place, and several stores in Beverly Center. Fourteen suspects, arrested on Dec. 2, were all released within hours after paying bail or meeting no-bail policies implemented last year for certain crimes to reduce jail populations during the pandemic.

The rare sneaker and streetwear shop Zero’s on Melrose Avenue, which counts Pete Davidson, Noah Cyrus, and several L.A. Rams players as clients, was robbed at gunpoint in September. Owner Zero Selon told KTLA that he was forced to spend his personal savings to hire armed security guards and additional staff.

While burglars’ attempts to smash through the Louis Vuitton and Saks Fifth Avenue storefronts in Beverly Hills with sledgehammers on Nov. 21 were thwarted by bulletproof glass, that city has significantly stepped up security.

While many celebrities showed public solidarity with Black Lives Matter and the #DefundThePolice movement, the obvious foolishness stopped at their city limits.

“We are one of the first cities in the country to hire more police — five officers were sworn in this week — and, for two years, the city of Beverly Hills has been working with two private security companies [Nastec and Covered6], so there are 80 added armed ex-military guards surveilling both the city and the [residential] neighborhoods,” Todd Johnson, president and CEO of the Beverly Hills Chamber of Commerce, told THR. “There are a lot more police on foot, bicycles, motorcycles and in cars. And there’s a good chance that you won’t even notice the undercover guys because they are dressed in sweats and sneakers. Many of the businesses on Rodeo (probably 70 to 80 percent) and throughout the city have additionally hired their own private security. We have more cameras per square foot than any other city in the world.
— The Hollywood Reporter, 12/22/21 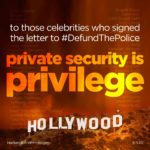 It takes a lot of chutzpah to have it reported to the world that shit’s gotten way out of control and the red carpet crowd can afford to insulate themselves from the things that made them feel good without as much of an apology to the rest of Americans who have to live in the world they helped subsidize.