History tends to repeat when either not addressed or corrected if need be.

“Committee Republicans only just got the sentencing transcript for this case on Friday, after the hearing had ended,” the GOP Judiciary Committee aide said. “Clearly, the White House either didn’t thoroughly vet the nominee, or were aware of the record and the intentionally left it out in hopes that the nominee would be confirmed before the full record could be uncovered and reviewed.”
— Fox News, 3/29/22

It obviously comes off as disingenuous when inconvenient, if not outright damaging, information is withheld from the opposition party (thus the American people) prior to Senate confirmation hearings for a Supreme Court vacancy. But where Democrats are concerned, negative information about nominee Judge Ketanji Brown Jackson did not break new ground.

As it turns out, it was a successful strategy deployed 84 years ago. Seeing how it didn’t happen within the last five, too many of today’s so-called journalists who are gushing over Jackson have failed to see the irony; that is, if they’d even provide the connected dots to the public. 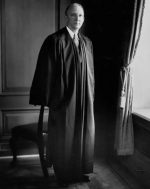 Hugo Black secured the democratic primary and cleared the way for an easy Alabama Senate win against his Republican opponent in 1926. And while he had provided his letter of resignation from the Klan the year prior in 1925, his time as a member of the Ku Klux Klan would eventually come back to haunt him.

Just a few weeks after getting confirmed for the Supreme Court, a report in the Pittsburgh Post-Gazette revealed Black’s history with the Klan. The Pulitzer Prize-winning report by journalist Ray Sprigle featured Black’s 1925 resignation letter from the Klan as proof.

Outrage erupted. Senators who voted for his confirmation argued they would have voted differently had they known Black was a Klan member. Even Black’s strongest supporter, President Franklin Delano Roosevelt, claimed to have had no knowledge of his KKK roots before nominating him to the highest court in the land.
— History Channel, 10/10/18

As Bill Clinton would later put it during his eulogy at Senator Robert Byrd’s memorial, it was yet another “fleeting” Klan association a Democrat needed in order to get elected.

Funny how Democrat presidents claim to know little about those they nominate to the highest court in the land; those with information that had to be hidden before confirmation….

…
Supreme Court Justice Hugo Black went on to ruling in a rather Constitutional, thus positive manner. It would be purposefully naïve to assume Brown Jackson will uphold an oath to defend it.

In the eight child-porn cases that came before her court, former D.C. District Court Judge Ketanji Brown Jackson heard horrifying details of “sadomasochistic” torture of young kids — including “infants and toddlers” — yet challenged the disturbing evidence presented by prosecutors and disregarded their prison recommendations to give the lightest possible punishments in each case, according to transcripts of sentencing hearings obtained by the Post. In some cases, she even apologized to some of the kiddie-porn perverts for having to follow the statutes, which she called “substantially flawed.”
— New York Post, 4/2/22

She’s clearly a liberal activist who’s been installed to subvert it and that’s probably why Democrats aimed to withhold as much information from the Senate and American people as possible.