By now we should all know what Democrats think about us niggers. They promote the use of the word in their version of “pop” culture. White liberal screenwriters in Hollywood add the word to “keep it real” in movies, television programs and music videos. They get all bent out of shape when a conservative has a mild Rush Limbaugh-Donovan McNabb or Trent Lott moment, but the sentiment that blacks truly are niggers has always been reserved for liberals.

When a black conservative is nominated for any kind of prominent position, the liberal response is that they are not the “right kind of black.” In other words, they’ve escaped the plantation and aren’t their kind of nigger. In order to place them within that category, people like Gloria Allred call them “Uncle Tom types.”

With that, the nomination of Dr. Condoleeza Rice by President Bush for the position of Secretary of State has elicited the usual response of racist caricature. 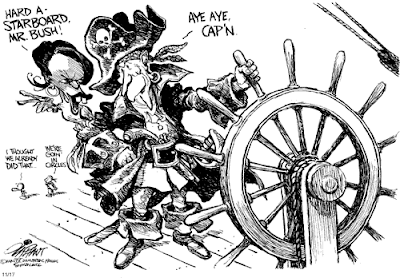 Democrats, who make it a point of reminding us how much they love us niggers, have never placed black people in positions of real importance. Sure city mayors here and there, but in previous liberal administrations have made it only as high as Secretary of Commerce and Deputy Attorney General. And when Commerce Secretary Ron Brown was killed in a plane crash while on duty, he wasn’t even given the courtesy of an autopsy, something of a given considering his position. Niggers aren’t worth that kind of attention or expense. Please note how the depiction of Dr. Rice is a parrot for a dumb Republican president, complete with the big lips and buckteeth. One can only imagine the screech if a conservative created a portrayal like that of a Democrat black.

Can any of us remember Mr. Oliphant creating a racist caricature of such esteemed dignitaries like Jesse Jackson of Al Sharpton? Where are the racist cartoons of Yassir Arafat, Osama bin Laden, or any of the terrorists that kill civilians as a military tactic? While Al-Jazeera is overplaying the shooting of a supposed unarmed terrorist by a U.S. marine while choosing not to air the execution of CARE President Margaret Hassan by Iraqi militants, where are the cartoons of those animals?

True, Arafat and his ilk was only bent on killing Jews, which is something the heralded United Nations consider a moot point. Hassan is just a woman, so her killers get a pass. But let a conservative black woman turn her back on her designated massah and watch her incur the wrath of the liberal press. 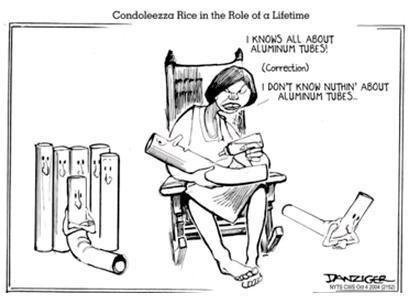 For those of you who missed the reference, Jeff Danziger’s cartoon is a parody of Butterfly McQueen’s famous lines about “birthin’ babies” from “Gone With The Wind.” Note Dr. Rice and the bare feet. Despite her upbringing and making it to highly respectable positions in life, she is reduced to a barefooted, Ebonics-speaking nigger bitch. No mention of her rise despite “adversity.” Word is, according to certain former Arkansas state troopers, the Clintons used the nigger word fairly recently, so Gary Trudeau’s depiction of a conversation in the White House between President Bush and Dr. Rice is exactly where a liberal would go given the opportunity.

Back to what should be taught in schools….

If not for the Republican Senate in 1964, there would be no Civil Rights Act, thanks to Dixiecrats like J. William Fulbright, Sam Irvin, Lester Maddox, and Albert Gore, Jr. If not for Senate Republicans blacks wouldn’t be allowed to vote, and better yet, if not for a Republican President, blacks might still be slaves if certain Democrats had any say.

So niggers who stray are fair game. 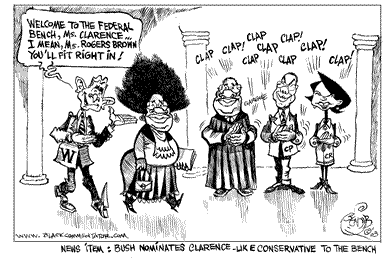 …
In the spot, Owens had no loyalty to his team and was ready to go do whatever was implied by the “cross promotion” with Sheridan, while his team took the field without him.

Despite the shallow apology, there was no wardrobe malfunction here. This was tawdry, unnecessary and the New York Times was okay with it.

So the next time liberals attempt to tell us how to be tolerant, I’m happy to know that in their eyes as a black conservative, I am a nigger and I’ve need to have my mind made right. Good thing for me they can’t take me out back for a whuppin’.

Just put me in one of those housing projects where I belong. Encourage me to have sex and impregnate as many women as possible so the Democrats can assume the role of father and consider my seed their property. Produce more rap videos so people around the world can embrace black people as the thugs and whores the liberals consider us, while white Hollywood liberals can buy homes in Beverly Hills from the cash such trash brings in.

Keep making those comics for the New York Times. That’s keeping it real, because that’s what happens when we make massah mad.