It had all the makings of another Boston fan black eye: visiting minority player (in this case, his son) being heckled by an unruly fan. But this also had another element: it was about LeBron James who seemingly accepts any opportunity to bask in any attention than could cast him as a victim.

First off, the event in question happened in the Massachusetts armpit of Springfield where the Basketball Hall of Fame is located; not in Boston during the Celtics game. And the offender wasn’t the preferred white male, so all it would take is an adoring media to play the public victim card.

Before he and the Los Angeles Lakers took on the rival Celtics in Boston on Monday night, LeBron James attended his son Bronny’s game with Sierra Canyon at the Hoophall Classic in Springfield. Unfortunately, the game came with a bit of a blemish for the James family.

In the second half of action, the game had to be briefly stopped as a fan threw something at James Jr. as he was standing on the sideline waiting to inbound the ball. The object hit Bronny in the back, at which time the referee immediately stopped play and called for a nearby police officer to try and identify the perpetrator. The fan was not removed from the game, and no further incidents occurred, per ESPN.
— CBS Sports, 1/21/20

Yes, that sounded pretty bad as that “something” could have been anything meant to cause some kind of bodily harm, one could only imagine some unruly drunk committing this ejectable action, and LeBron responded as expected. 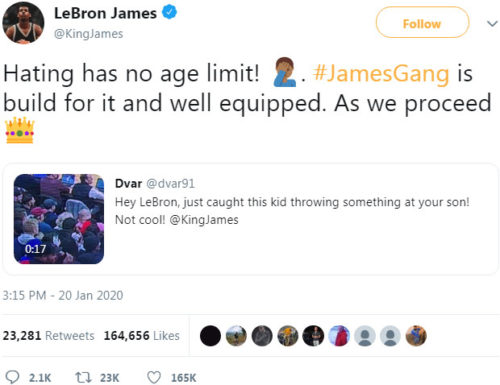 No one is condoning unruly activity at a sporting event, or anywhere for that matter, aimed at an athlete or anyone, but even after the specifics of the incident emerged, LeBron had to keep the drama going.

Sierra Canyon’s game on Monday at the Hoophall Classic was briefly stopped after someone in the crowd threw a piece of debris in the direction of LeBron James Jr.

I didn’t see it or hear it, actually. While I was on the opposite side of the floor, I did see the referee stop the game or stop the inbound, and the cop came up there,” he said. “I didn’t even know what happened until the video evidence showed me when I got here.

It’s just disrespectful, and it was a little kid too. I don’t know how old that little kid was, so I don’t know if he learned that on his own or if he learned it at home. Whatever the case may be, it’s disrespectful. I wonder how old that kid is, if he is the age around Bronny’s age [15] or [James’ son] Bryce’s age [12]. I’d like to see them try that while they’re paying attention.
— ESPN, 1/20/20

Yeah, like the #JamesGang would take matters into their own hands on this offender who fessed up and apologized; an offender quite unexpected….

If an average father’s son was hit by a thrown orange peel by a much younger kid, chances are a federal case wouldn’t have been made of it. It’s clear by his own Tweet that LeBron James was made privy to the details regarding the “something” thrown at his son and the make of the perpetrator but still had to blow this up to “hate” status. The problem is none of the potential elements could fit that criteria.

Pity the poor law enforcement officer that would bring a kid before a judge, charged with misdemeanor orange peel assault.