An Academic Response To ‘The Democrat Race Lie’

Things have become rather undisciplined in the world of journalism and opinion, as when one uses the word “lie”, intent must be proven or the accusation could be libelous. I believe I made the point in reference to the Democrats in the piece I wrote called “The Democrat Race Lie”. To set it up, I used a page from the Democrats’ own website (which they finally updated in 2010). The lines I had the most issue with were…

Democrats are unwavering in our support of equal opportunity for all Americans. That’s why we’ve worked to pass every one of our nation’s Civil Rights laws, and every law that protects workers…. On every civil rights issue, Democrats have led the fight. We support vigorous enforcement of existing laws, and remain committed to protecting fundamental civil rights in America.

THAT was not true. Why the Democrats opted to remove most of those words is something the party should explain, if they ever do.

Last night, I received an email from an academic at an “Intercultural Communications College” who took issue with assertions I raised after doing research on the 150-plus years of American history glossed over in many of today’s classrooms. In my case, I left school with a rather abbreviated knowledge of black history. There was slavery, Abraham Lincoln freed the slaves, Martin Luther King, Jr. fought for civil rights until he was killed, Republicans were/are racists, something about Selma, Alabama, the Klan, and not much else. It wasn’t until I did the research did I come to another conclusion, a conclusion that doesn’t sit well with the left….

A republican I know directed me to your website as prof that the democratic party is racist. She is obviously unable to formulate her own opinion and learn things on her own. . As a history PHD I thought you may appreciate a few facts yourself. omissions.

Before the Civil War, the South was Democratic and the North largely Republican. Both parties were thoroughly racist.

My research found that the Republican Party was created as an abolitionist party to slavery; it’s sole purpose for being. I may be a simpleton in comparison to this academic, but this was one of the first things I found in my personal quest for the truth and I’m surprised she didn’t find it as well. Omissions?

I’ll try not to interrupt.

The war was fought to reunify the nation — not to end slavery. Lincoln said, “If I can restore the Union without freeing any slaves, I will do so.” However, he ultimately issued the Emancipation Proclamation, which freed “slaves in the states of rebellion.” In other words, it freed nobody. Why was it issued? Largely to deter Britain from siding with the South. (Britain was antislavery, but her economic ties were to the South.) In other words, virtually everything your website, Black and Right, attributes to Republicans in the 19th century was done for political expediency. Nonetheless, one could certainly argue that the northern Republicans after the Civil War were far less racist than the southern Democrats into the 20th century. There was full segregation of the races in the South, but not in the North. Blacks were also denied the vote by use of such things as “grandfather” clauses (if your grandfather couldn’t vote, you couldn’t vote), literacy tests and poll taxes in the South.

Thanks for the clarification….

Naturally, African Americans overwhelmingly voted Republican where they were able to vote. But it must be remembered that there were very few blacks in the North during this entire time.

It is in the 20th century that all things change. At around the time of World War I, there is a mass exodus of blacks from the South to the North. At that time, racism becomes entrenched in the North — leading to terrible riots and rampant discrimination in Chicago and elsewhere in 1919. Now repression occurs in the North with a vengeance, leading to acute suffering within the black community as the economy slides into the Great Depression. Despite the racism of the times and his dependence on the votes of racist southern Democrats, Franklin Roosevelt demanded that blacks share equally in all relief efforts of his administration. Indeed, FDR had a “black cabinet”: African American leaders who kept him apprised of the special needs of black people in the depression. FDR also named a black woman head of the youth relief program. Eleanor, of course, was an outspoken black advocate.

I believe the person FDR appointed to head the National Youth Administration was Aubrey Williams, a white man. Black Republican Mary Jane McLeod Bethune was appointed to an NYA division, but not as “head”. Yes, I know I’m nitpicking….

Then came Harry Truman. The idea that Republicans opposed his dropping of the atomic bombs is ludicrous. America didn’t have such partisanship then as it does today. His Sec’y of War, Henry Stimson, was a Republican who had service under Herbert Hoover (a Republican prez). Besides, in 1948, Truman desegregated the armed services — fulfilling FDR’s promise to do so after the war. That was huge because it was so eminently successful from the get-go, and gave black men such an important avenue of advancement.

“America didn’t have such partisanship then as it does today.” Tell that to Charles Sumner.

Again, I’m humbled in my attempt to debate a “history PHD” (wouldn’t that be “Ph.D”…?), but I would think partisanship would be at it’s worse during, let’s say, a Civil War? But that’s only me.

Yes, Earl Warren, the Chief Justice of the Supreme Court when Brown vs. Bd. of Ed. decision was made in 1956 was a Republican. However, the case was brought by an all-Democratic organization, the NAACP.

In addition, the Republican prez at the time, Eisenhower, reacted to the decision by saying that his appointment of Warren was “the biggest damn-fool decision I ever made.”

Of course, the most egregious aspect of your Website is its failure to mention the two most singularly important pieces of civil rights legislation passed in American history: the Civil Rights Act of 1963 and the Voting Rights Act of 1965.

I believe I did. I “egregiously” wrote:

June 10, 1964
Senate Minority Leader Everett Dirksen (R-IL) criticizes Democrat filibuster against 1964 Civil Rights Act, calls on Democrats to stop opposing racial equality. The Civil Rights Act of 1964 was introduced and approved by a staggering majority of Republicans in the Senate. The Act was opposed by most southern Democrat senators, several of whom were proud segregationists—one of them being Al Gore Sr. Democrat President Lyndon B. Johnson relied on Illinois Senator Everett Dirksen, the Republican leader from Illinois, to get the Act passed.

I guess she missed that.

It is utterly dumbfounding to me that Lyndon Johnson (a Democrat) was actually able to get them passed. Indeed, if they hadn’t been passed then, they would never have gotten passed. The Civil Rights Act of 1963 made discrimination and segregation unlawful in all aspects of life. (By the way, this forbade discrimination against woman as well.)

Discrimination against women was legal prior to 1919. 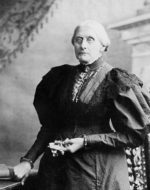 November 18, 1872
Susan B. Anthony arrested for voting, after boasting to Elizabeth Cady Stanton that she voted for “the Republican ticket — straight”

That was changed by Republicans, despite the best efforts of Democrats.

August 18, 1920
The Republican-authored 19th Amendment giving women the right to vote became part of the Constitution. Twenty-six of the 36 states needed to ratify had Republican-controlled legislatures.

Despite its passage, the vast majority of blacks were still unable to vote in the South. So, the Voting Rights Act outlawed all devises impeding blacks’ right to vote, and allowed the Justice Dept. — not states — to prosecute all cases brought under the law. Indeed, the Justice Dept. was empowered to go into districts where fewer than 50% of blacks were registered to vote and oversee their registration and voting procedures to ensure fairness. Fortunately, a largely Democratic Supreme Court withstood the many legal attempts to have these laws gutted or claimed unconstitutional. In other words, they were enforced to the full measure and changed society forever.

It was after the passage of these bills that the South abandoned the Democratic party for the Republican party. That’s why the vast majority of bigots with guns are now older white-guy Republicans and live in the Bible-belt. It’s also why these Republicans oppose money going to safety-net programs: they assume, mistakenly, that the recipients are all blacks (or immigrants).

I presume you heard of all the efforts made in these states in the last two elections to curtail the black vote? Requiring special ID, etc. Some African Americans waited hours and hours to vote. That is what Obama was referring to in his Inaugural Address. But they did wait. They waited to vote Democratic!

I produced an informal sampling of blacks and found some even laughed at the notion that obtaining a photo I.D. was beyond them.

You can hear the partisan tone of her email and I don’t believe she adequately addressed the initial premise of my “Race Lie” piece that contends that Democrats have lied to blacks about their past because they believe blacks are stupid enough to accept it, and they have such low regard for black people they would deny us the truth about our history in this country.

This academic accused me of “omission” while herself leaving easily attainable, yet inconvenient information out of her rebuttal. Her snarky response to the Republican she demeaned as not being able to formulate her own opinion is clear hypocrisy when this very academic recites Democrat talking points about voter disenfranchisement and our reliance on the “safety net”.

Yes, they waited to vote for Obama (purely because he’s black) and they will continue to have little to show for it. THAT is the Democrat tradition.

I would ask this person since 1965 when Democrats retook ownership of the black population, what has gotten better for the community? Sure, a black president was elected twice and he and his family will be taken care of, but what exactly has improved for most blacks? Personally, I believe the Democrat track record in the black community is a travesty and the only way they can maintain the vote is by keeping the black standard of living down by increasing the dependence on “safety net” programs.

Liberals, championed by progressive Margaret Sanger, call it choice to kill our babies and say very little when our children are shot dead in the street, yet they go are far as attempting to pass legislation when white kids are victims.

As in any lie, the real fear for the liar is that one day the truth will come out and what the repercussions will be.

Democrats have been using blacks for political gain for decades and what has been the result?

Inferior schools thus low employment opportunities thus high crime neighborhoods. There is NOTHING happening in the black community that liberals would allow to happen in theirs. When it does, they freak out. There is little in the history of the Democrat Party that shows me they have the best interests of blacks at heart. Back in the day, they created the Klan to kill us, now they use Planned Parenthood to do it legally.

If I’m wrong, maybe this academic can show me some proof I can see, not just take her word for it.