“Jerry Maguire” felt a need to vent and publicly issued what he felt should be the mission statement of his industry.

Instead of a mission statement, this is more of a lament of how a craft of creativity and skill was hijacked by way too many who have the tools, don’t know or care how to use them properly, and how it’s devaluing what used to be an art into a cheap commodity. 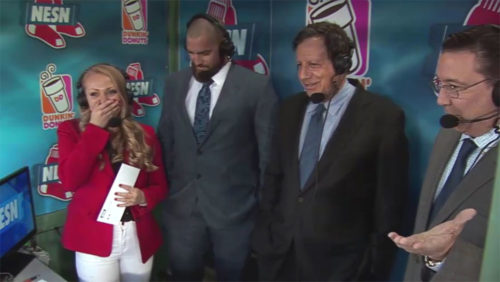 Click ABOVE to view a pitiful example of mediocrity rewarded

For a producer gig at NESN, no experience or formal training necessary….

Back in the early-to-mid 1990’s, I was working for the Fox Broadcasting Company in Hollywood as a graphic designer. That was in the day before Photoshop caught on and being a graphic designer was a specialized craft.

Graphics, in broadcast television, supplemented the video. To some of the producers I worked with, my efforts were specifically sought. To others, it was just “slap some graphic on there” as the video was the most important and the graphics were a mere necessity of lesser importance.

With the advent of blogs, video is now regarded as something to be “slapped on” to supplement the all-important text. I say this because the pride in creating quality supplemental video is virtually gone, as is the respect for the craft.

As a video producer and editor, I view in horror the video clips submitted on some blog sites disseminated for public view. I’ve also been reading the skills requested by those seeking seeking video candidates for some of those sites and it reflects the low expectations for the product and the off-the-street abilities accepted by those employers.

It’s relatively easy to create and upload videos to sites like YouTube utilizing video from smartphones and/or existing clips found online, and with rudimentary programs like Windows Movie Maker and iMovie, one can call him or herself an editor with little or no practical experience.

But seeing how the writers consider themselves the draw, video is just a moving photo that is there to verify what is more important: the written word from a wonk and since the expectations of the video editor are so low (thus the video quality is questionable at best), see if any of the following examples are familiar….

There are many reasons for fuzzy picture quality. The most consistent is that the video itself when created was rendered at a very small size. This could be because the video was uploaded to a company’s server so to keep costs down, the video size is small as well.

However, it could also be operator ignorance as high quality could have been maintained but the editor didn’t know certain settings could have been adjusted to make the video better.

The fuzzy video watched could also be a result of an editor going online and ripping the first sought after clip found (which may have been created poorly) instead of taking the time to dig a little longer until a more pristine clip could be found. Those of you who visit this site know that the video quality is the best available because I take the time to hunt for, as close as possible, the original source.

And don’t get me started on those “professionals” who continue to shoot vertical video on their smartphones or those who don’t know how to render video in proper aspect ratios….

Whether we’re talking video used in national news pieces or even in congressional and gubernatorial campaigns, smartphones held in selfie “vertical” mode is what the public is subjected to more and more. To further illustrate the amateur sophistry of people getting paid to hold the camera incorrectly on what was once considered the professional level, see this informative video on Vertical Video Syndrome.

You may have noticed that on some web videos, you’ll only hear video on either your right or left speaker. That’s because, especially in the case of amateur interviews, one mic was used and audio was thus only recorded on one channel.

In post production, depending on the level of software used, it usually only takes the click of a mouse to put the audio on both left and right channels. That is, if the editor knows how to do it, whomever approves the video knows as well, and that also depends if either of them even care.

In many cases, I’ve taken the time to click on that mouse when producing video from outside sources that were released with incomplete audio. These are the little things you may notice when viewing B&B Media videos versus those on other sites.

When I produce videos, it’s routine to take care of those little things. I can always tell when other sites are ripping video from each other because the consistent errors are spread amongst them like a virus.

One of those annoyances is low volume. It again only takes a click of a mouse in the editing program to increase the volume of a video clip so the viewer doesn’t have to raise the volume on their computer to hear the spoken word just to be blasted by the next video that pops up.

Again, it’s one of those little things amateurs don’t catch because they either didn’t know that one-channel audio is a bad thing, didn’t know how to fix the problem, or they and their bloggers didn’t care.

And I won’t even get into how many people I personally know who are in charge of blog video departments only because they were competent in the basics of cutting and uploading simple videos….

Until video is a respected craft, companies will continue to hire cheap “talent” to create video clips that cut off spoken words because the editing programs are cheap as well, you’ll have video that is visibly squished horizontally because a widescreen video was improperly rendered and released to the public anyway, and audio quality that will make you have your hand on the volume button… just in case.

Technology is a great thing, except when it turns beginners into cheap labor at the cost of quality and reputation. Graphic design used to be a specialized craft until Photoshop and Illustrator came along. Logos that were hand drawn according to the established disciplines and sold for hundreds of dollars have been replaced by popups advertising $1 logos.

It’s sad that I could be possibly be giving away trade secrets that real professionals regard the norm. Whether we’re talking video or graphics. you get what you pay for.

Some of us DO care (and know why).

I can’t tell you how many times I’ve had a client tell me he or she had no idea what they wanted and as soon as I presented an idea, they got all inspired and took over the creative process with milquetoast suggestions leading to questionable results. Just because they’re paying, doesn’t mean their new ideas are all that great and if the product isn’t received well, will they accept some of the blame? We all know the answer to that question.

Television is the only craft where too many believe they are experts simply because they’ve watched it.
— Bob Parks

A few years ago, I was tasked with a project and when I came up with an idea, was approached by the boss who suddenly now had ideas! Ideas that took a production that would have taken two days to shoot and edit to (literally) a shoot that took six months and the timeliness of that video was lost… by six months. Another project took seven re-edits because the client showed and took comments from other people. The last person he showed said it was all a mess, so I showed him the original edit which he said was great.

The ideal client (and there aren’t too many out there) is one that hires you for what they know you’ve done and are willing to back off and let you do it again. Again, if a video comes out great and it included a lot of their input, be ready for the “Why did I hire you?” that gets thrown in your face. If a video comes out like crap, we all know they’ll NEVER assume any responsibility for muddying up the creative process and again you’ll be the one to get “Why did I hire you?”

The good news is that all things are cyclical and at some point, the mediocres who’ve diluted the talent pool will be sidestepped for those who know what they’re doing and will be respected for it.