Have YOU received the latest Tea Party Patriots emergency email…?

If so, you’re not alone.

I just got another email from Jenny Beth asking if we have any more funds in the budget that can be directed toward grassroots activities in our targeted states.

And honestly, I’m pretty stressed out… because the answer is NO.

By the way, who elected Jenny Beth Martin leader or “chairwoman” of anything? Just askin’….

You see, right now, we’re still $27,986 away from our weekly fundraising goal.

And if I can’t raise those funds in the next few hours, we’re going to have to start cutting back our grassroots efforts in key states like Iowa, North Carolina, and New Hampshire.

So I’m asking you to help. Right now. We only have a few hours left to hit this goal, so it’s absolutely imperative that you make an emergency contribution of $5, $10, $25, or whatever you possibly can.

Well, if you were to check out the Tea Party Patriots Citizens Fund on OpenSecrets, you might walk away scratching your head as to why they would “have to start cutting back our grassroots efforts”. 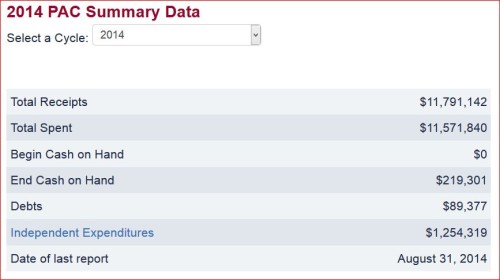 “At the behest of a wealthy donor, Mrs. Martin undertook a personal makeover, losing 70 pounds, changing her hairstyle and overhauling her wardrobe.”

They’re sending out what appears to be rather desperate email calls for money which begs to ask where the $10,536,823 went?

Hopefully someone who’s been to an event sponsored by the Tea Party Patriots can share stories when the TPPs came in and bought refreshments and/or meals, provided transportation and lodging, offered national media exposure and paid speaking engagements to the Tea Party volunteers as often as is provided for the Patriots’ hierarchy.

Ann Coulter and TV host Sean Hannity clashed on Wednesday over the tactics being used by some Tea Party lawmakers in Washington. While Hannity commended lawmakers for taking a stand for their principles, Coulter suggested the movement is being hijacked by “con men” who are “tricking Americans to send them money.”

Tea Party Patriots claim to be representing the Tea Party but to date has given almost no financial assistance to the campaigns of conservatives Matt Bevin, Joe Carr, Tim Scott, Steve King, Dave Brat, Louis Gohmert, and Joni Ernst among others.

To be fair, I also criticized Rep. Michelle Bachmann as one of the creators of the “Tea Party Caucus” on Capitol Hill which she also used as a personal launching pad for her failed presidential run. Many have been using the Tea Party for their own personal gain…

JennyBeth Martin, the Tea Party Patriots’ chairwoman, oversees all its expenditures, meaning she sets her own $15,000 monthly fee for strategic consulting — payments that have totaled $120,000 since July. She also draws a salary as president of the Tea Party Patriots’ nonprofit arm — getting more than $272,000 in the 2012 fiscal year, according to the group’s most recent tax filing.

Her twin salaries put her on track to make more than $450,000 this year, a dramatic change in lifestyle for the tea party activist, who had filed for bankruptcy in 2008 and then cleaned homes for a period of time to bring in extra money.

The major parties use terms like “unwinnable” when deciding who to support, regardless of how popular a candidate is with the people. In fact, the Republican Party in particular seems determined to put contributions gathered towards politicians who needed to move on years ago. Tea Party Patriots should be assisting every citizen who sticks his or her neck out to represent a movement that’s been assaulted by the left from Day One, and not act like the establishment party in picking winners and losers.

The Tea Party was (at the time) a beautiful, non-partisan gathering on Capitol Hill to protest the promised “transformation of America” by liberals led by Barack Obama, and for that they were labeled “conservative” and smeared by the media. NONE of those groups and/or entities that have “Tea Party” on their names created it but are unapologetic and bilking millions from retirees, veterans, and concerned Americans for every cent they can get out of them so a few can live a quite comfortable existence.

Hundreds of thousands gathered on “9/12”, as well as those who saw all the people and the potential for dollars they represented.

Fortunately, not all groups that have incorporated “Tea Party” into their names appear to be organizationally top heavy, with those at the top (literally) getting quite heavy. 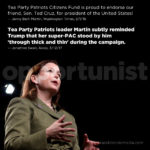 Like many staunch two-faced representatives of “conthervative printhipleth”, Jenny Beth Martin was very publicly against presidential candidate Donald Trump, until it was financially beneficial for her to be in support of President Donald Trump.