The president’s supporters complained about Israeli Prime Minister Benjamin Netanyahu’s speech before a Joint Session of Congress being so close to an election while conveniently forgetting the fact Obama had a high-profile campaign rally in Berlin just prior to the 2008 presidential election.

Of course, THAT was entirely proper.

Considering how easy it is for Barack Obama to whine about anything involving pushback to his agenda, one can only imagine how much he’d be bitching if a foreign entity came to the United States in 2012 to help facilitate HIS defeat. Then again, we’re way past redundant when it comes to the hypocrisy oozing from this administration.

It wasn’t just Israel’s left-wing parties that lost big as part of Prime Minister Benjamin Netanyahu’s dramatic victory yesterday. Team Obama, which pulled as many strings as it could to defeat Netanyahu, was embarrassed. It had dispatched Jeremy Bird, the architect of the grass-roots and online organizing efforts behind both of Obama’s presidential campaign, to Israel to work the same magic there with a group called Victory 15.
— Newsmax, 3/18/15

The possibly illegal meddling was flagged early on, resulting in the typical petulant, Obama-style mocking response.

V15 denied the charges, and said that “the Netanyahus and Likud gathered so many recycled bottles that they are convinced that they will be able to make imaginary genies come out of them… V15 activists will continue to capture the junctions and the street, while they continue to recycle and hallucinate.”
— Times of Israel, 2/1/15

Obama and his minions are really good at gloating when they win but are seldom gracious in defeat.

Among the most disappointed with the results of Tuesday’s elections are the activists of the V15 group – the organization that may or may not have been funded by American and European interests, but whose aim was to remove Prime Minister Binyamin Netanyahu from office. “A confusing night turned into a painful morning,” the group said in a statement. “It was painful not because we lost, but because we have no faith in the winners.”
— Israel National News, 3/18/15

We know the feeling.

As in anything involving the Obama administration, there are now questions as to the legality of what Victory 15 did, let alone the propriety.

A US Senate investigatory committee has launched a probe into an American nonprofit’s funding of efforts to oust Prime Minister Benjamin Netanyahu after the State Department of US President Barack Obama gave the nonprofit taxpayer-funded grants, Fox News reported on Saturday. According to the source, the probe is looking into “funding” by the OneVoice Movement – a Washington-based group that has received $350,000 in recent State Department grants, Fox News reported.
— Jerusalem Post, 3/14/15

So, of course, those possible improprieties can quickly be mended when you have the power of the top office behind you….

The American nonprofit OneVoice Movement – under scrutiny by a U.S. Senate panel over possible links to a campaign to oust Israeli Prime Minister Benjamin Netanyahu – quietly filed paperwork that would allow it to engage in political activism after two leading Republican lawmakers questioned its use of government funds, FoxNews.com has learned.
— Fox News, 3/18/15

Like many other issues that have gone unanswered, it will probably take years after the anticipated departure of Obama and his cronies before we know just how many State Department (taxpayer) dollars went into the attempt to unseat yet another foreign leader.

Obama also had boots on the ground during elections in Great Britain where his guys profited off of both sides. 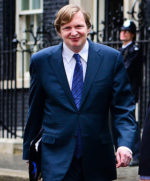 British Prime Minister David Cameron kept hold of power and was moving to form a new government. In the wings, American political guru Jim Messina was adding another to his long list of wins.

Messina, a top aide to Barack Obama’s 2008 presidential campaign and the chief of his 2012 re-election bid, joined Cameron’s Conservative Party as a paid consultant in 2013 and worked to export the latest innovations in American-style campaigning to the U.K. The former White House deputy chief of staff drew fire from U.S. liberals for joining up with Cameron.

A pair of Obama veterans, meanwhile, was recovering from rival Labour’s loss. Former Obama senior adviser David Axelrod and advertising maven Larry Grisolano had worked for Ed Miliband’s Labour Party, which suffered deep losses. Miliband resigned from his post as party leader and the Americans were heading back across the pond in defeat.
— TIME Magazine, 5/8/15 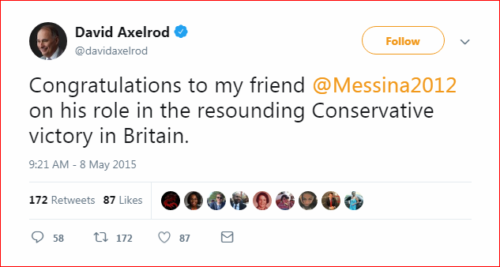 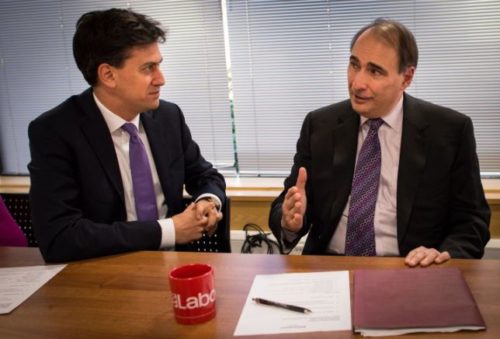 Obama has taken it upon himself (and his superior intellect) to meddle with American lives just because he could, but just because he can also keep his loyalists fat and happy, doesn’t mean they’re consistently good at it.

Messina has agreed to a consulting job in Berlin: He wants to help the center-left Social Democratic Party (SPD) beat Chancellor Angela Merkel of the conservative Christian Democrats in the next national election in 2017.

This Saturday, Messina will make his first appearance in this new capacity. The SPD plans to introduce their new helper for the first time at the so-called “Campaign Camp” in the Schöneberger Gasometer in Berlin. He will report on the newest trends in campaign work: data analysis, addressing voters and online communication.
— Der Spiegel, 9/4/15

It doesn’t matter where.

The premier relies on the American communication guru for the referendum campaign. The triumphs with Obama and Cameron, the 400 thousand euros of the parcel, the McDonald’s, the psychologist wife, the fast cars, the big data and the door-to-door: this is the “Mr. Wolf” who will try to convince Italy to say Yup.

“You are Matteo, right? I’m Jim Messina, I solve problems.” The first meeting between Prime Minister Renzi and the American guru of communication is good to imagine him so, on the threshold of the house, in full Tarantino style.
— Vanity Fair Italia, 10/7/16

But they travelled well.

His company, the Messina Group, was paid £276,000 by the Remain campaign, and a reported €400,000 for its Italian work. It is not clear how much Mr Messina was paid for his most recent work for the Tories.

The Messina Group declined to comment. Last year it did also work for Spain’s Popular party in its successful campaign. It was paid a reported €290,000 for its work in that election, which took place days after the EU referendum. Mr Messina, a 47-year-old former US Senate staff member, also showed misplaced confidence ahead of last year’s US presidential election.

“Dear panicking Dems, she will win,” he tweeted in September 2016, seven weeks before Hillary Clinton lost to Donald Trump. He also accused Mr Trump of running the “most incompetent [general election] campaign in history.”
— Financial Times, 6/12/17

So while the Democrat left pontificates about the horrors of foreigners meddling in our elections, take a good look at some of Barack Obama’s most trusted campaign lieutenants who are making really good money on foreign soil, working to elect politicians sympathetic to the so-called progressive agenda; not necessarily what’s best for the United States.