When Will We Be Free of Useless Female Sports ‘Journalists’?

Let this be a lesson to Carolina Panthers star quarterback Cam Newton when dealing with liberals. It takes minutes for you to outlive your usefulness and be thrown under the bus, repeatedly. He dutifully added his touch to the black NFL player protests but say something considered sexist and insensitive to the “gender equality” cause and your currency is rendered as swiftly worthless as a bank account in Greece.

Matters only got worse after the press conference in question when the exchange between Newton and aggrieved sports journalist Jourdan Rodrigue continued after the fact.

The conversation, according to Rodrigue, was not taped but went something like this: she asked the quarterback if he really didn’t think a female could understand routes.

Newton said she wasn’t really seeing specific routes when watching the game, she was just seeing if somebody was open. She argued that he didn’t know what she saw nor how hard she had studied football, and that maybe the two of them needed to have a deeper conversation.

Newton said that maybe he should have said it was funny to hear “reporters” talk about routes and that, if she actually did know about them, then she knew more than most reporters. Then he gestured toward the locker room, still filled with her colleagues.

Rodrigue ended by asking Newton — whom she had introduced herself to on the first day of her employment with The Observer in October 2016 — if he knew her name after she had covered the team almost every day for the past year. Newton said he did not. 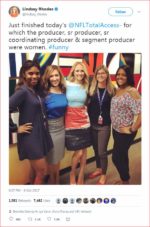 Our position regarding women in sports journalism roles are known: we don’t believe women, most of whom have never set foot on a field with cleats and pads, should be reporting on professional sports.

Of course, all hell breaks loose when the obvious is stated for obvious reasons.

A rule that prohibits women from entering locker rooms is the right thing to do. The absolute right thing to do is to ban all reporters from locker rooms. The place where men shower and shave — the bathroom, essentially — is no place to be conducting interviews in the first place. It’s an outdated notion. And when TV networks send their perfectly made up, beautifully dressed reporters into a locker room filled with naked sex symbols, they’re creating sexual tension and courting potential conflicts of interest.

Yeah, I know female sports reporters are a beacon of morality and professionalism. So are priests and presidents and Jimmy Swaggert. So come on, let’s be honest.
— Jason Whitlock, Sex and the locker room

When you watch CNBC, Bloomberg, or Fox Business for the closing numbers on Wall Street, you’ll normally see them interviewing people who’ve actually been CEOs or traders. You don’t see women with plunging necklines, hair bleached Fox News blonde, and hooker-length heels they quickly remove once the segment is over if leg shots were involved. Aside from the show hosts (which is another topic altogether), we see and hear from people who have practical experience in the field in which they speak.

Last year, we met a woman who ran a nonprofit that took in used furniture donations and gave them to those in need. She invited us to see the operation and there we met a young black man who worked for her. He was a former NFL middle linebacker for two seasons whose career was essentially ended by a knee injury.

The conversation obviously diverted from furniture-altruism to pro football and for the next hour-plus, we were kids in the candy store, asking questions we’ve never heard asked and in that time we got more behind-the-scenes insights than in ALL the years of reading, watching, and hearing the “professional” commentary presently issued by heavily made-up women as well as old, fat, balding or skinny, scruffy millennial men who’ve also never set foot on a field as a player.

If only the sideline reporters and sports channel talk panels were populated by former players, knowledge about our favorite sports would be so much more enhanced than to have a field reporter intercept a head coach going to the locker room at halftime and asking him something as vapid as how he feels or a player about his emotions.

While Rodrigue was briefly hoisted as America’s latest female victim of “gender equality”, the Twitter equalizer of all things unearthed items that proved to be embarrassing, if not hypocritical. 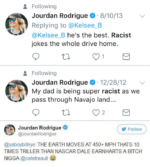 Of course, the enormity of Newton’s gender crime almost excused what normally gets any racist male fired and if you look at it from the liberal prism, the white woman is almost always more valued than the predator black male. Cam Newton has lost and may lose a lot more while Rodrigue will walk away almost unscathed.

Disclosure: We are New England Patriots fans and normally have nothing good to say about Cam Newton or the Carolina Panthers.