Trump’s Lewandowski Charged with the Phantom ‘Battery’ of Michelle Fields

Here’s what could be a justified textbook reason for NOT hiring narcissistic millennials.

Corey Lewandowski, Donald Trump campaign manager, was charged this morning with misdemeanor battery after allegations of forcefully grabbing a reporter at a Jupiter news conference, town police confirmed this morning.

Following a March 8 conference at Trump National Golf Club, Michelle Fields, a 28-year-old reporter formerly with the online Breitbart News Network, said she was grabbed on the arm by Lewandowski, 41, after she asked Trump a question about affirmative action.

For the last month, all we’ve seen are inconclusive videos that made it easy for Fields and her numerous sympathetic protectors to claim she was pushed, grabbed, thrown down, etc. and of course, Michelle Fields would NEVER have created drama (again) just because she needed to let people know of her very existence as she’s coming out with a book…? 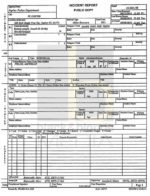 It might be a good idea for attention-whore Michelle Fields to (finally!) shut up, lay low, or lawyer-up to defend herself because the initial story doesn’t match the videotape.

A police report lists Michelle Fields, a 28-year-old Breitbart News Network reporter, as the alleged victim in the incident. The report does not give a description of the incident but cites the weapons used as “hands, feet, fist, teeth”. There is no mention of Trump campaign manager Corey Lewandowski, whom Fields said left bruises on her arm after she asked Trump a question following a news conference.
— Palm Beach Post, 3/11/16

Young people like Fields, Shapiro, and Terris are part of the reason the news business is as incompetently performed as it is, because it always has to be all about them, and not doing what they’re supposed to be doing: their job.

Corey Lewandowski was charged by a Clinton supporter, but we’ll not assume this is at all politically motivated, right? Stand by because it’s now getting thick.

After questions were raised about the event, Ben Terris ordered his photographer to destroy or withhold any evidence revealing the hoax.

The players now have to go all the way because of public police reports on the so-called “battery” which will clearly be questioned because of now very thin credibility. Michelle Fields may never be able to get a job in journalism and that would be a belated good thing, but it’s again sad how easily conservative males fall for the stupid.