NFL Judges Patriots on DeflateGate, But Does Everybody Do It?

The verdict is in and the football world (outside of New England) is collectively pointing and saying, “See!”

On Wednesday, the N.F.L. released its report on its investigation into New England’s surreptitious practice of deflating game-day footballs. Using detailed accounts and circumstantial evidence, it implicated quarterback Tom Brady as part of the operation, saying he surely knew that the two employees, Jim McNally, 48, and John Jastremski, then 35, were purposely deflating footballs to a level beyond the permissible threshold for Brady’s benefit.

Already there are screams, demanding Brady be suspended for two, four, or six weeks of the upcoming season. But I have a question….

IF (and there are still speculations within the NFL’s report) Brady knew the balls were being deflated, and IF it really gave him a competitive edge, why is Brady being singled out? Is he the ONLY player who’s ever tried to gain an edge, and if not, why are some of the league’s loudmouths all sanctimonious about Brady while ignoring significant others?

Jerry Rice admitted that he used stickum on his gloves to help him catch footballs. “I know this might be a little illegal, guys, I just put a little spray, a little stickum on them, to make sure that texture is a little sticky,” Rice said.

And after a little heat, he issued the following statement. 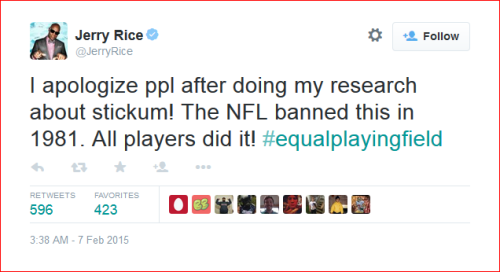 I’m going to be point blank, I feel like it’s cheating, because you have an edge up on your opponent and its unfortunate that it happened. I think you have to really put an asterisk on it, because this is going to follow them, you know, for the rest of their lives, because when you look at it, when people go back and they think about the New England Patriots, they’re going to think about these controversies.
— Jerry Rice, on DeflateGate

Brady and the Patriots have been implicated in ONE playoff game. 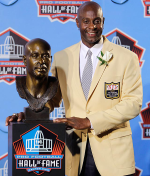 Also, look at the number (or lack of) current quarterbacks who speak out on DeflateGate. If you remember, there were only two or so NFL coaches that spoke out on the SpyGate scandal.

Not because they had nothing to say, but maybe… everybody does it!