These Are #HillaryObamaAnarchists, NOT ‘Anti-Trump Protesters’

In order to sooth their hurt feeling, sore loser sentiments, the media is attempting to legitimize the criminal behavior of the “anti-Trump protesters” by citing their so-called 1st Amendment right to protest. However, no one has ever proved the Founding Fathers were okay with protests that inconvenienced innocent bystanders, protesters that bullied (verbally and physically) opposition, the destruction of private and public property, all because a minority of spoiled brats didn’t get their way on November 8th.

MSNBC’s Rachel Maddow and reporter Vaughn Hillyard felt the need to repeatedly remind her audience that these are “peaceful”, “organic” protests….

When President Obama and Democrats passed the “Affordable Health Act” without a single opposing vote, did Republicans take to the streets to disrupt and cause damage? No.

When President Obama (on numerous occasions) circumvented the opposition Congress and sign possibly unconstitutional Executive Orders just because he had “a phone and a pen”, did Republicans take to the streets to disrupt and cause damage? No.

In fact, EVERY TIME Republicans held protest rallies, permits were obtained in a specific area and after that area was left cleaner than when it started, unlike Occupy Wall Street where areas had to be sanitized for future human occupancy.

It’s because Republicans have consistently acted like adults, took their political punches from the Democrat left, waited for the next election opportunity to take their frustration out on politicians who were responsible for the offending legislation.

One minor point: why hasn’t President Obama requested free time on all of American television to implore the snowflakes protest in an respectable manner (that is, if this anarchy isn’t what he really wants)? Because he never has when he should have.

The media and protesters constantly repeat their reactions to Donald Trump’s “campaign rhetoric” yet NEVER mention the many acts of racism aimed at the general public in general, Republicans and conservatives specifically, because they’ve given a pass to liberal activists and minorities who’ve help further the cause. 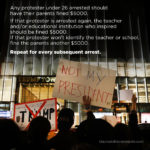 This is obviously NOT legitimate civil discourse. Many of the punks who took to the streets to “protest” the victory of Donald Trump over Hillary Clinton couldn’t have been bothered to vote, their candidate lost and they still didn’t get a trophy.

They are acting like criminals, should be dealt with accordingly and until that happens, the spoiled-brat tantrum will continue.