There’s a lot of hang-wringing going on between fans and the sportswriter-intelligentsia over the trade of wide receiver Josh Gordon from the Cleveland Browns to the New England Patriots. 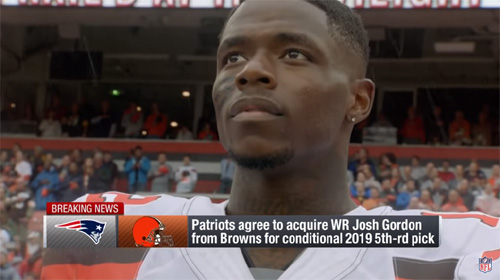 Not making excuses for Gordon’s numerous off-the-field issues but his head should turn around in New England. He knows, like many before him, he’s got a golden opportunity to be with a team that consistently wins which is huge compared to where he’s been for all of his career.

“We’ve done all we can do for Josh,” said Cleveland coach Hue Jackson, who didn’t provide any specifics about Gordon’s issues over the weekend. “We tried to provide the right environment. It just didn’t work out. Sometimes you just need a change of scenery and hopefully things work out for Josh.”
— YourErie.com, 9/17/18

They did all they could for Josh. Winning would have helped and let’s also allow holier-than-thou sports writers to pontificate.

Make no mistake – the 27-year-old Gordon is an athletic freak. If he can indeed buy into the Patriot way, he could be just the football answer they’ve been looking for. His production when he’s on the field is ridiculous. Among active players, Gordon’s average of 92 receiving yards a game is fourth only to Julio Jones, Antonio Brown, and Odell Beckham Jr., otherwise known as the three best receivers in the game.

Of course the operative phrase is “when he’s on the field.” Gordon missed all of the 2015 and 2016 seasons because of suspensions and rehab for substance abuse (he has admitted to regular use of marijuana).
— Boston Globe, 9/17/18

Not sure how many football games the Globe’s Tara Sullivan has under her belt, but anyone who’s played any team sport knows how deflating and toxic a consistently losing environment can be, especially when the losing occurs for years.

Imagine being one of the most talented players in the league, playing for a Cleveland Browns team that hasn’t won a regular season game since December 24, 2016, which incidentally ended a 17-game losing streak. The Browns are 1-32-1 since 2016. Which one of us wouldn’t take a toke or two?

When reminiscing over previous troubled players who had their careers turn around in New England, remember that they almost all had one thing in common: they were immensely talented and played for reliably shitty teams. We’re dealing with successful athletes, most of whom are initially drafted into consistently bad organizations. Sometimes a great paycheck isn’t enough, especially when everyone around you, from the top down, are numerically-proven losers. 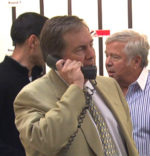 Josh Gordon isn’t stupid and it would have been illuminating to hear his phone conversation with Coach Belichick prior to the trade being inked in stone. The Patriots seldom make personnel moves out of desperation so they, as usual, see something the rest of us missed.

When Gordon plays, he is one of the NFL’s best players. He just rarely does. But when veterans get to Foxboro, the Patriots tend to bring out the best in them. That has the rest of the league terrified of the possibilities of what Gordon might do as a Patriot.
— 24/7 Sports, 9/17/18

Gordon knows if he’s dumped by the Patriots, his career is as good as done. He’s now walking into the day after years in the night; something he’s never experienced until now and buying-in to a winning, no-bullshit culture should be a refreshing motivator. It’s all up to Josh.

For all the geniuses who said this trade would never happen, imagine Gordon lining up near Rob Gronkowski with Dez Bryant on the other side of the field. I’m not the only one thinking this.

Tom Brady barks out signals from the shotgun. Rob Gronkowski is on the line of scrimmage as an in-line tight end. Julian Edelman is in motion. Chris Hogan is already wide on Gronkowski’s side of the formation. Dez Bryant is on the opposite side of the field on an island. If Bryant is doubled, that would make life difficult for any defense that wants an extra set of eyes on Gronkowski or Edelman. If he isn’t, then Bryant has an opportunity to feast in one-on-one coverage.
— NBC Sports

The Patriots are not done yet. They have a workout planned with Dez Bryant this week.
— Adam Schefter Tweet, 9/17/18

Josh Gordon proved the doubters wrong and his skills were a noticeable contribution to the team, while he was allowed to play. 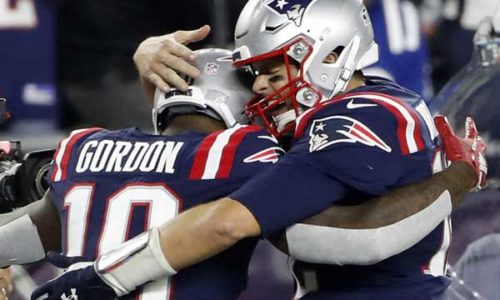 VIDEO: “Josh Gordon – Every Catch as a New England Patriot”

It looks like there could be good news for Patriots Nation and Josh Gordon.

Brady posted a GIF of himself throwing to Gordon on Instagram Wednesday with this caption alongside it: “Practice makes perfect.”
— Boston.com, 6/19/19

And seeing how little with the New England Patriots happens randomly, the following news story makes a lot of potential sense.

It’s unclear when receiver Josh Gordon will be cleared to return to the NFL. It is clear that Gordon is trying to get back in. Charean Williams of PFT reports that Gordon has applied for reinstatement.
— Pro Football Talk, 8/3/19

Josh appears to have gotten his mind right and Tom Brady wouldn’t be devoting valuable off-time with him if he wasn’t someone who’d be a target in a few weeks.

New England Patriots wide receiver Josh Gordon has been reinstated to the National Football League on a conditional basis. Effective Sunday, Gordon may rejoin the Patriots to attend meetings and engage in conditioning work and individual workouts.

Gordon will be permitted to participate in team activities, including practice, as long as he makes the appropriate progress on clinical care and other arrangements. However, he will not be allowed to play in the Patriots’ Aug. 22 preseason game against the Carolina Panthers because he will not have had sufficient conditioning and practice time, the NFL said. Gordon will be allowed to attend the game at Gillette Stadium.
— WCVB Boston, 8/16/19

How many covering the National Football League have suddenly had to reassess the whole thing about Tom Brady not having any reliable wide receivers to throw to in 2019?