Is #Pedogate DC Ramping Up Thanks to an Indifferent, National Media?

Unfortunately we’ve seen it many times before: a young, white female goes missing and we get national media news alerts that are covered from start to finish. But we now have a rash of missing, mostly black female teens going missing in our national capitol, there’s no national alerts, and we’re basically told not to panic because it’s all been blown out of proportion because of social media?

The response on Twitter from the DC Police, “Sorry to alarm you.” 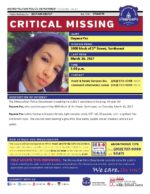 A series of viral tweets is bringing attention to 10 young people of color who were reported missing in Washington, D.C., over the past 10 days.

On Sunday night, Twitter user @BlackMarvelGirl tweeted photos and information about eight black teenage girls who’ve gone missing in the Washington, D.C., area over the past week, receiving more than 35,000 retweets in less than 12 hours.

Additionally, The Root reported that in the past 10 days alone, 10 young people of color have been reported missing in D.C. but haven’t received much media attention other than local news outlet mentions and tweets from the Washington, D.C., police department.
— Teen Vogue, 3/13/17

Let’s be real; if ten young women disappeared right across the river from DC in Georgetown or in any mostly white locale in a week, do you honestly believe it wouldn’t make “breaking” national news and federal agencies joined in on the hunt? While a few of these children were Tweeted as located by the DC police, these has been little media follow-up and/or fanfare to the level it would be if a missing teen female was located in suburbs. And do you really believe the link between the legend of rampant pedophilia with elites in DC wouldn’t have also been mentioned in the potential national media wall-to-wall coverage?

Or could it be because of those who are rumored to be involved?

The ongoing Hollywood Pedogate is joined at the hip with the D.C. Pizzagate. The very reason that many Hollywooders came out of the woodwork to support Hillary R. Clinton and bash Donald J. Trump is because of this close association of decade-long child abuse scandals in both D.C. and Tinseltown.

It’s important to understand that Pizzagate was revealed by the double whammy of the Podesta WikiLeaks and Anthony Weiner’s 650,000 emails. In other words, the time had come for this pedophilia in high places to be blown wide open.

What makes Pizzagate so very explosive is that all of the key players are deep in D.C. politics and Washington power-plays, US government influence peddling and federal power-brokering.
— State of the Nation, 12/25/16

Call it a conspiracy theory or something to be seriously considered, there IS a rash of youth disappearances in the DC area. The media has NOT deemed ten missing in a week newsworthy. Those who may be participating could be high up in the world of politics and the federal government. Anyone who brings the topic up is quickly attacked and discredited.

Meanwhile, children are going missing and few appear to give a damn and that’s the biggest tragedy.