Nude Pic Swapping Illegal in Navy, Marines. The Posers Are Given a Pass

The Department of the Navy has cracked down on the “swapping” of nude pictures of personnel.

Posting nude pictures of service members without consent is now, for all intents and purposes, a crime in the Navy and Marine Corps — a response to the nude photo-sharing scandal that surfaced when a reporter outed a private Facebook group of Marines and sailors that was used at times to swap nudes.
— Navy Times, 4/19/17

A little cause-and-effect seems to be absent in the rationale here.

We’ve only seen one reported instance where a female Marine was photographed clothed (which doesn’t mean there wasn’t more), but….

According to the reports, one Marine followed a woman corporal and photographed her as she picked up gear. Those photos ended up on the Facebook page and drew dozens of explicit comments, with users writing that they wanted to “pound her” and videotape it.

Some of the photos appeared to have been taken by the women and shared consensually, but were intended to be private, the reports said. Women who spoke with War Horse said they believed the racy pics were either leaked by former partners, or stolen by stalkers or hackers.
— New York Daily News, 3/5/17

Is it not reasonable to conclude there would be far fewer pictures to “swap” if women didn’t pose naked in the first place?

Many images appear to have originated from the consensual, but private, exchange of racy images, some clearly taken by the women themselves.

The War Horse has spoken with five of the women in the photographs. Two said they believe former partners might have leaked images. Some said they worry their own accounts might have been hacked or poached. One said a co-worker, a male Marine, alerted her to the fact that the photographs had been posted.
— The War Horse: An Attack From Within: Male Marines Ambush Women In Uniform

Well, the Marine Corps went into damage control mode and attempted to shut that thinking down.

3.1. Assessment of the Information Environment: Based off historical precedence, once the story publishes, national outlets will write their own stories and Congressional Members will request briefs on how the Corps will handle this situation. Media may request to speak with Marine leaders at the headquarters and local, Major Subordinate Command levels. The story will likely spark shares and discussions across social media, offering venues for Marines and former Marines who may victim blame, i.e., “they shouldn’t have taken the photos in the first place,” or bemoan that they believe the Corps is becoming soft or politically correct. Concern from Congress about the Marines Corps’ treatment of women across the force may be a topic of discussion. Combined, these articles may 1) may negatively impact perceptions among female Marines of leadership’s ability to address these situations, 2) spark criticism from nonprofit groups that advocate on behalf of female service members, 3) require communication to Congress in terms of how the Corps intends to handle these situations and what deliberate actions that it will take in the future, and 4) negatively impact the Corps’ reputation among segments of the American public.

The Guidance made repeated references to the problems of “misogyny” within the Corps, but nothing on slut behavior aside from the one reference to “victim blame” which implies the Corps sees their women as unwitting victims, so don’t even go there.

The Acting Secretary of the Navy subsequently failed to address the source(s) of the now-illegal content in question. 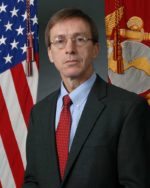 3. Distribution means the act of delivering to the actual or constructive possession of another, including transmission by electronic means.

4. “Broadcasting” means the act of electronically transmitting a visual image with the intent that it be viewed by a person or persons.

5. An intimate image is any visual depiction, including by electronic means, that:
a. Includes another person who is identifiable from the depiction itself or from information conveyed in connection with the depiction;
b. Depicts that person engaging in sexually explicit conduct or depicts the private area of that person; and
c. Taken under circumstances in which the person depicted had a reasonable expectation of privacy.

9. This interim change will be incorporated into the next printed revision of reference (a).

10. Released by Sean J. Stackley, Acting Secretary of the Navy.//

This is a matter of decency and shouldn’t be passed off as a sign of the millennial times. While men “swapping” nude pictures of female military personnel is morally wrong, giving women who allowed those pictures to be taken in the first place a pass (to avoid “victim blaming”) shouldn’t cut it in an Armed Forces that boasts of equality.

We’ll just have to wait for our federal representatives to get around to that inconvenient aspect of this scandal.