There’s a couple of unfortunate dynamics within the conservative movement: if some people didn’t see it on Fox News, it didn’t happen and if a black and/or Latina claims to be a Republican, he or she is blindly embraced and celebrated as the new “it”.

The problem is some of these people are opportunists of questionable substance and are eventually outed as the frauds they always were.

When we first saw Joy Villa pose at the Grammy Awards with the rather gaudy Trump gown, the first thing that went through our heads was who is she and is this another attempt to suck in gullible, bleeding heart white conservatives who want to appear to laud anyone black and conservative? 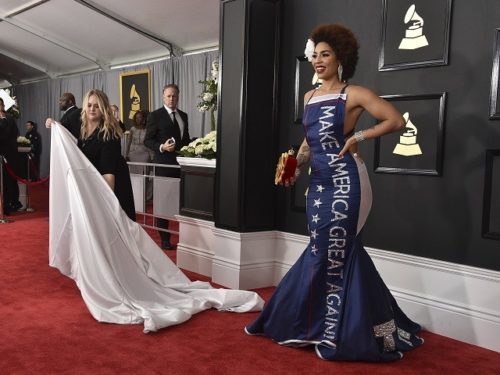 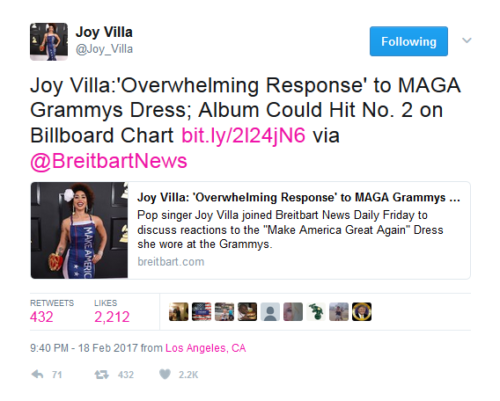 Has Joy Villa always been a Republican and/or conservative all along or does her past (not reported by Fox News) betray her as a hustler aimed at the “stupid” right?

To Joy Villa: Do Not Trust Trump Supporters

Actually, it should’ve been the other way around. 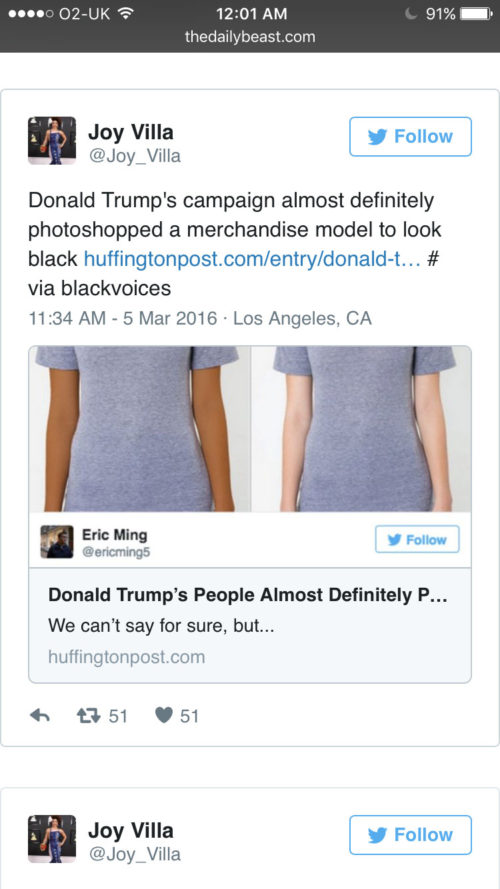 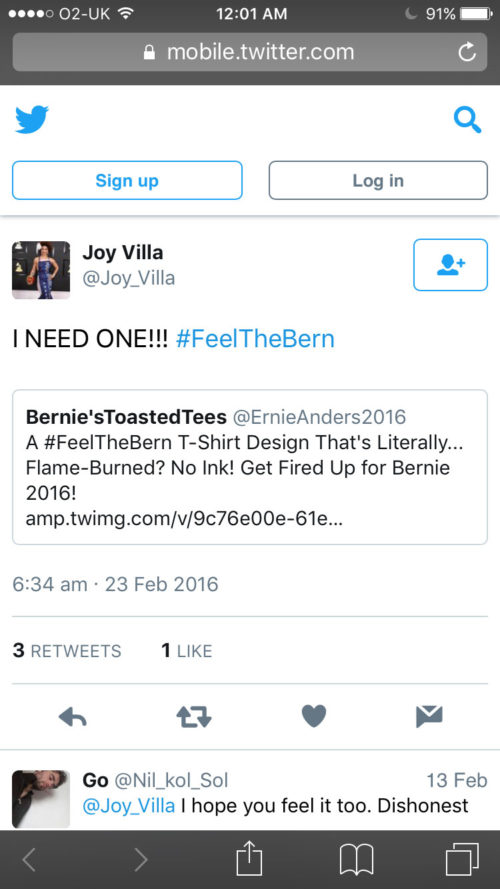 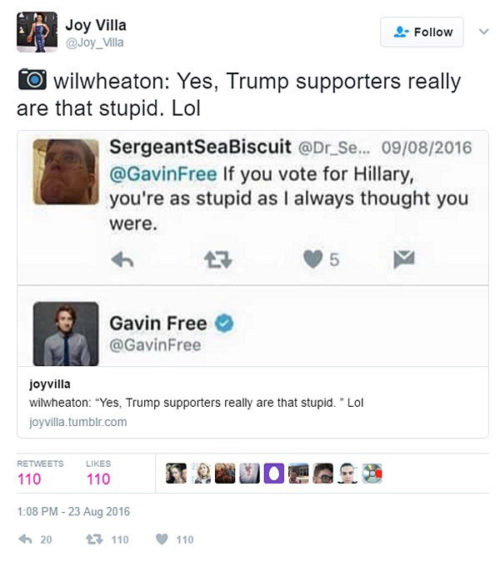 Joy was smart enough (now that she’s getting a lot of attention) to start scrubbing her inconvenient past.

While Joy Villa enjoys newfound fame at the targeted expense of Trump supporters, she does have an appreciation of music.

Like what she heard and enjoyed while chillin’ with Occupy Seattle and now mulling over a possible congressional run….

It’s-all-about-ME Joy Villa has way too many clueless Republicans believing she supported and voted for Donald Trump and endured the liberal backlash with her head held high while her social media activity on Election Day implies she did not.

Villa tells Billboard that she did cast her ballot for Trump, even if she wasn’t proclaiming it at the time. “I was overseas on tour and all I saw were these over-the-top, bad-news headlines,” she says. “So I was skeptical at first (about Trump), like many Americans were and still continue to be. What really changed for me was when I spent some time researching before going to the polls. And I made the decision I thought was best, personally, as an American. I voted for Trump and I’m glad I did.“
— Billboard, 2/17/17

Sorry, the dates and her supposed actions don’t add up. 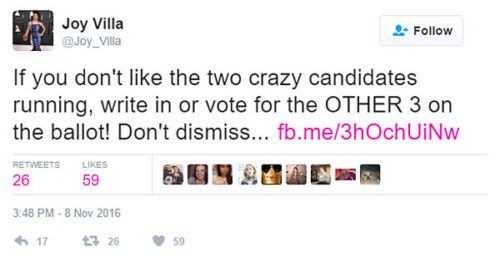 What’s really sad is that Joy Villa will enjoy even more popularity because clueless conservatives will again see her on Fox News. 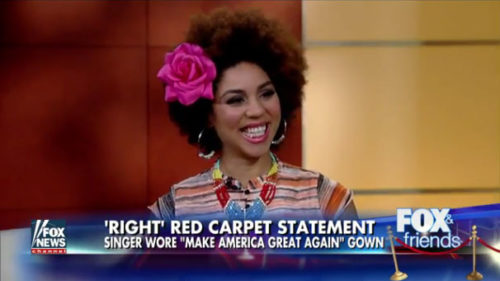 Joy is also fundraising off veterans…. 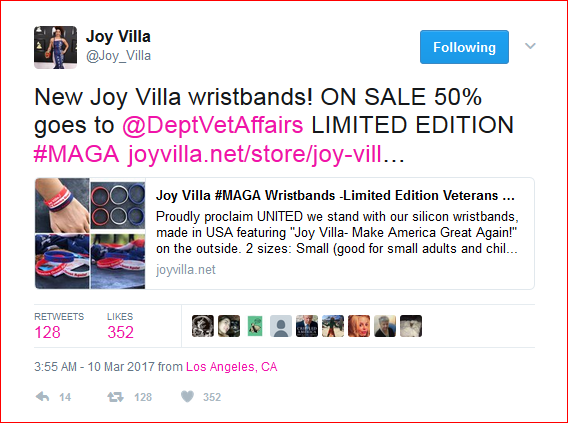 Villa clearly had an issue with Donald Trump’s position on illegal immigration. 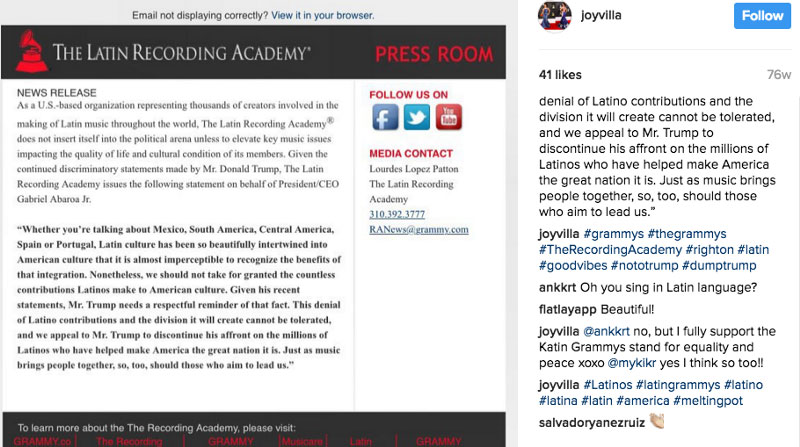 Her position on the abortion issue was rather defined. 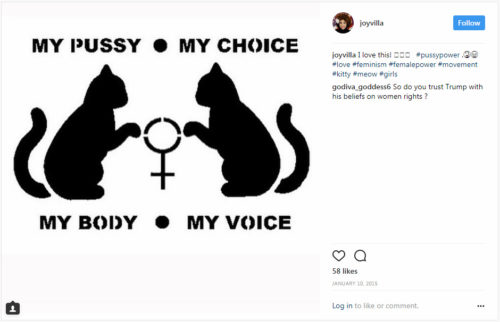 The questions of her allegiance to Scientology was also clarified. 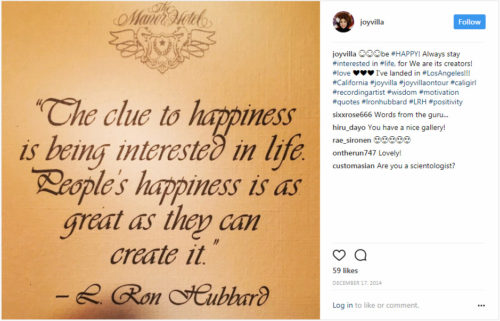 Her previous Grammy outfits didn’t set her apart from the rest; neither did her other outfit. While many deserving of support have a resume of activism and paper trail, this appears to be representative of Joy Villa’s body of work. 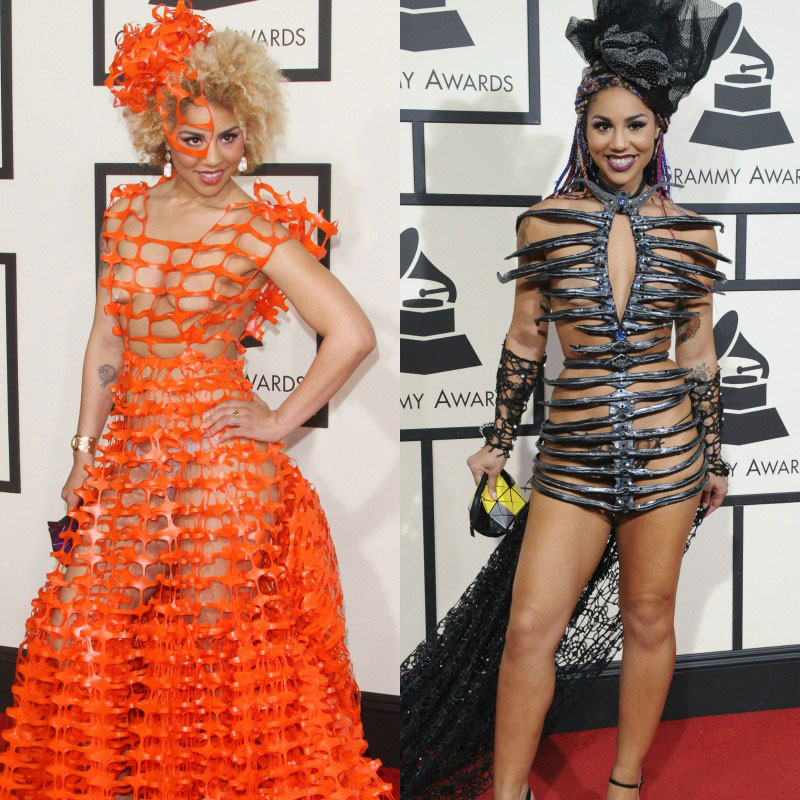 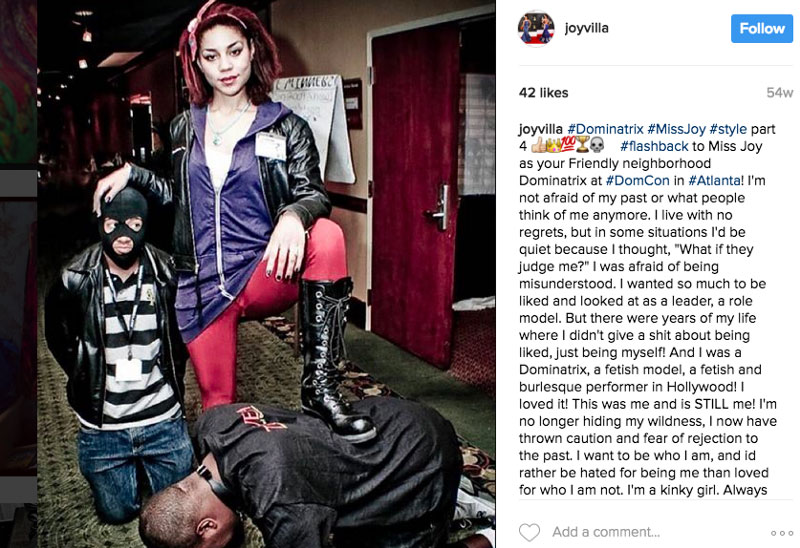 Joy Villa is Stacey Dash 2.0. Maybe she’ll get a speaking gig next year at CPAC or a big space on the couch of #Outnumbered. Her music sales went through the roof, there’s a buzz about a movie and in the end, it’s all about what WE can do for Joy.

If Joy was so proud of her past, how come she’s scrubbed her Twitter feed back to a few days after the Grammy Awards even though her account dates back to August 2009?

Too many will do anything to prove liberals wrong and that Republicans aren’t racist, including let their guard down. Women got sucked in by the “dress” and too many conservative men just see her as “hot” which explains a lot of other issues within the movement in who get’s pushed to the front and why.

Just how many suckers on the right are there…? 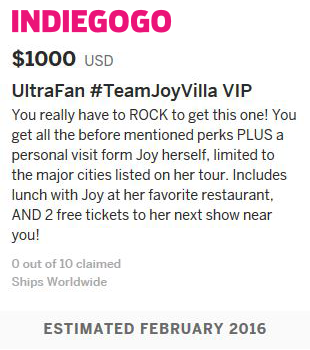 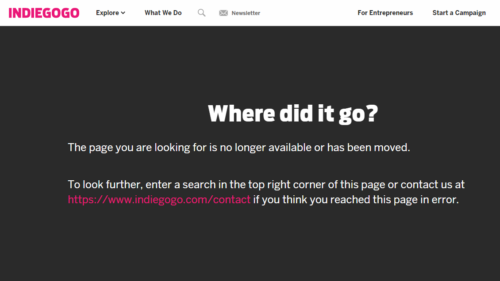 It’s sad how close opportunists like Joy Villa continue to get to President Trump. 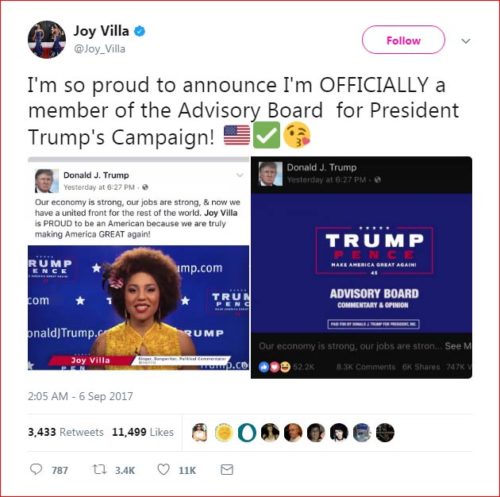 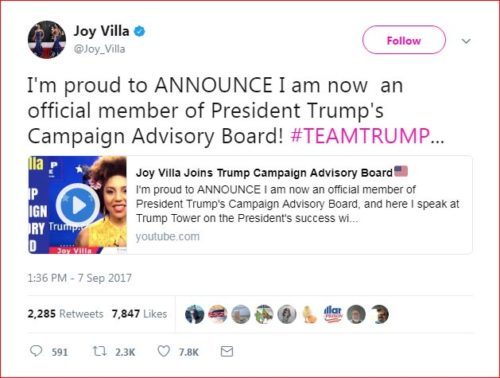 Being in and around Washington, D.C. has inspired another way for Joy to cash in off the dupes, including additional free national promotion by the know-it-all, research-challenged stoopids at….

Fox News: Joy Villa mulls a run for Congress: What to know about the pro-Trump singer

Villa, who describes herself as an “unabashed Conservative and Trump supporter” was appointed to the president’s Campaign Advisory Board — a part of Trump’s 2020 campaign which is run by Lara Trump. She’s also been a distinguished speaker at a GOP event in Tucson.

Try not to gag reading the Fox News piece, totally devoid of serious research into her true background. 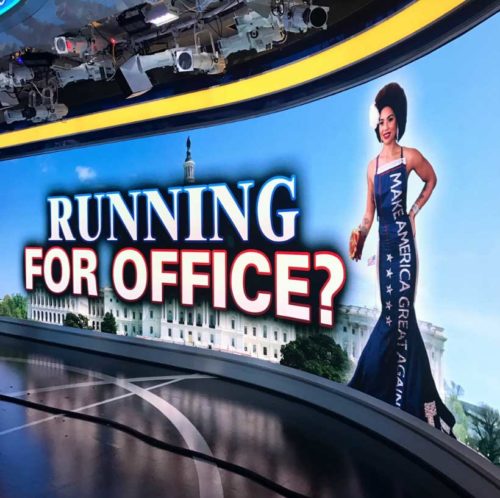 Joy wants more money to help her make a decision and if she decides not to run after all, she keeps it.

And as the true story of Joy Villa is finally being realized by more outside of Fox News and high-profile “conservatives”, it was time for some damage control which (as usual) again was all about Joy. 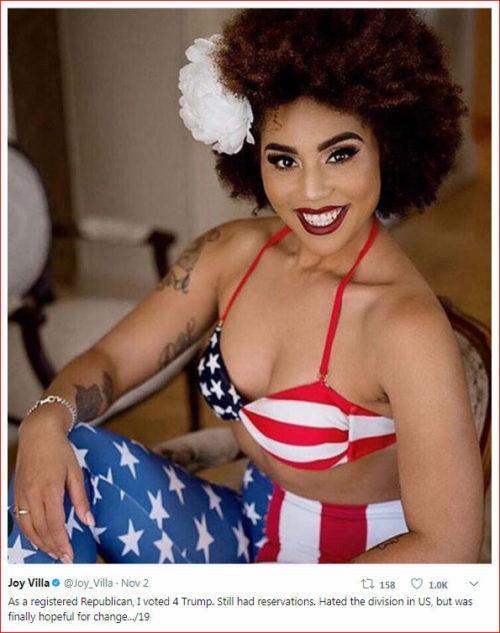 Send in the duped!

“What if this messes up my chances.” 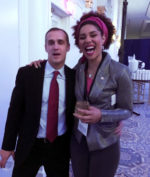 Villa, 31, said she was circulating in the ballroom of the invite-only party with a friend who brought her over to introduce her to Lewandowski, whom she had never met. Her first impression, she said, was that he seemed dismissive of her, and rolled his eyes when he thought she wanted to pose for a photo with him.

“I said, if you’re busy, don’t worry about it, we don’t have to take a photo,” Villa recalled telling Lewandowski, who remains close with the president and attended a contentious Oval Office meeting on political strategy earlier this week. But Villa said another reveler pushed her toward him and she ended up standing next to him and posing for a picture, despite his seeming lack of interest.

“I’m wearing this silver suit and stretchy pants, and after the photo, he smacks my ass really hard,”Villa said. “It was completely demeaning and shocking.”

Joy Villa, from her own words, wanted yet another picture taken with someone more important than her and now attach herself to a social media vehicle (#MeToo) for attention.

George Harris, who was filmed having his butt slapped by singer Joy Villa in September, denies her claims that the interaction was consensual. The tequila entrepreneur told DailyMail.com that Villa ‘appears to be an opportunist, who plays loose with the truth.’
— Daily Mail, 11/29/17

Let’s see how long it takes Fox News to claim “breaking news” status when they decide to out the very woman who’s duped them for months because they were too inept to do a little background checking.

With that, is Joy issuing a shot across the bow? 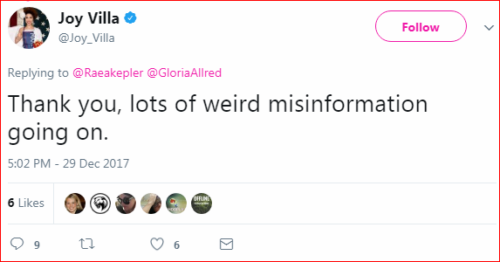 Consider this: it usually takes a body of work in activism and loyal content to get anywhere someone connected to any White House. How Joy Villa, having ZERO conservative and/or Republican record of accomplishment could have gotten so close to the upper echelon of the Trump Administration and totally fooled the professionals at Fox News and numerous other media outlets is a question that’s yet to be answered, let alone even acknowledged to date.

38. Joy Villa — The actress and singer has a reputation for shocking fashion statements on the red carpet, perhaps none more than the pro-Trump “Make America Great Again” gown Villa wore to the 2016 Grammy Awards. In October 2017, she announced on “Fox and Friends” that she was considering a run for Congress as a GOP candidate who professes to be “pro-life, pro-Constitution, pro-2A, pro-tax reform, pro-Trump, pro-religious freedom, anti-human trafficking, [and] anti-illegal immigration.”

No wonder why so few take Newsmax seriously. 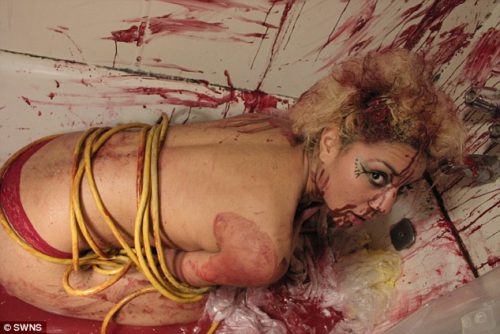 And exactly who conducted her background check, not to mention those who followed her?

While Sheldon Adelson, Robert Mercer, Foster Friess, the Koch Brothers and Ricketts family dole out millions annually to a variety of conservative nonprofits, not one has ever approached black conservatives with a track record and offered them a sizable budget with an accountant and hired them to do what they do best. Could it be some might be able to find fresh talent and not kneejerk draw from the same wonk trough? Could it be some might be able to create content that wasn’t the predictable clickbait issued because anything else would require imagination? Do they even know where to look seeing how too many conservatives only get their information from one news channel left on during all waking hours?
— Conservatives Are Why We Get Dashes, Villas, and Omarosas

As long as the ignorants continue to embrace her, Joy Villa will remain the herpes of the conservative movement. 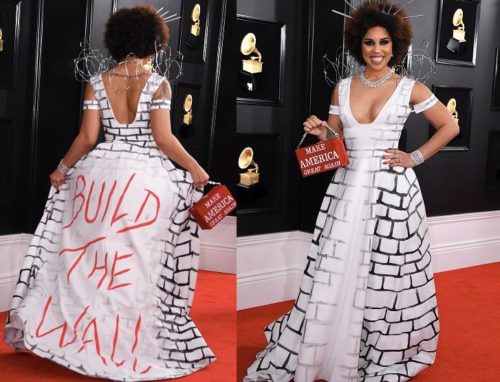 Singer Joy Villa wore a ‘Build the Wall’ dress with a ‘Make America Great Again’ purse at the Grammys, and it’s not the first time she’s worn a pro-Trump dress