Anyone who’s served knows that officers get the final word. Many are very decent people. But there are also those who will gladly take the credit for the work those under them do but should a mistake happen, they’ll make sure the shit rolls downhill because heaven forbid anything tarnish their fitness report.

This kind of situation came to a very public light and thankfully, we have a Commander-in-Chief who was not a part of the officer class and is thus not looking the other way and blindly giving them the benefit of the doubt or cover.

After months of high-profile legal gaffes, the head of the Navy has ordered what officials are calling an operational pause for the Navy’s legal community. The largest and most comprehensive review of the Navy’s legal system kicked off the day after President Donald Trump publicly admonished the JAG community for awarding medals to the lawyers who were responsible for the failed prosecution of Special Warfare Operator Chief Edward Gallagher.
— US Naval Institute, 8/5/19 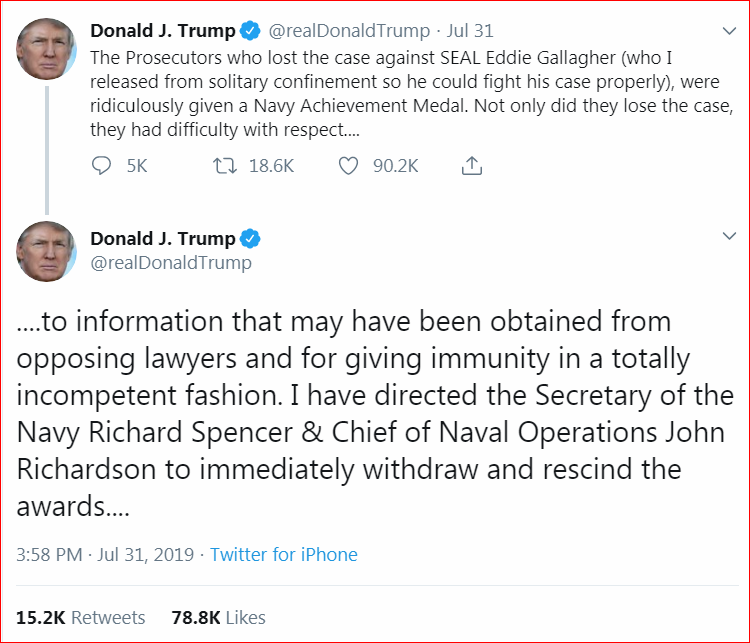 Navy Cmdr. Christopher Czaplak, the lead Navy prosecutor in the war crimes case against a decorated Navy SEAL, has been removed from the case by the judge for spying on defense teams and a Navy Times journalist.

Czaplak was ordered off the case against Special Warfare Operator Chief Edward “Eddie” Gallagher by the judge, Navy Capt. Aaron Rugh, on Monday after Czaplak admitted emailing 13 defense attorneys and paralegals, as well as Navy Times editor Carl Prine, a tracking beacon in an effort to find the source of leaks to the media.

Last week, officials announced in court that the Marine Corps had withdrawn Capt. Conor McMahon, an assistant prosecutor, from the case.
— Military Times, 6/4/19

Busted thus evidence there’s a need to review the systemic. 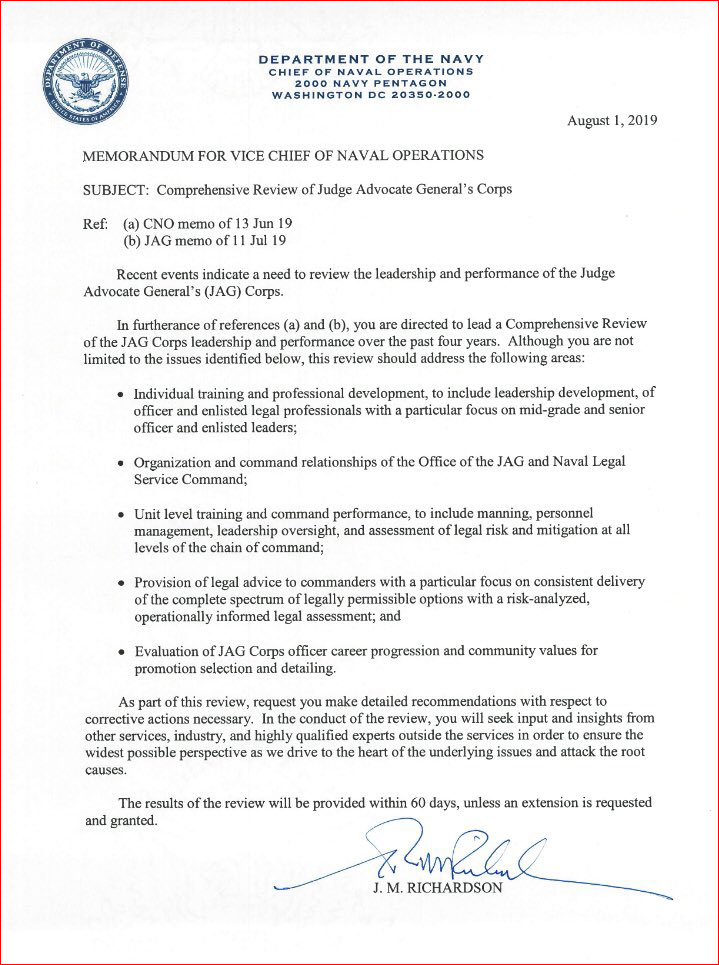 In particular, officials singled out the unlawful command influence (UCI) from senior JAGs over the case of Senior Chief Special Warfare Operator Keith Barry. Barry was convicted of a rape charge in 2015, but the conviction was overturned by a military appellate court when it found that the Navy’s top lawyer, Vice Adm. James Crawford, had pressured officials on the outcome of the case.

There’s no mention of the UCI on Vice Admiral Crawford’s official Navy bio. Funny how that works.

This “review” is LONG overdue and hopefully this won’t be scrubbed as well by those who never see a theater of battle but whose career is more important than people’s lives and freedom.

Again, it must reiterated that there are officers who are professional and decent people, have a mission to accomplish and respect those under them that get the job done. I don’t think civilians can truly appreciate the 24/7 power officers enjoy over enlisteds in all branches of the military. But if things get to a stage where legal representation becomes necessary, the officer class is rarely allowed to be found guilty of poor judgment or worse.

JAG officers, despite the glowing Hollywood depictions, are dangerous when they have power over the professional livelihoods and freedom of men and women whose only response can be either “Yes, sir” or “Yes, ma’am.” These officers can be surrounded by those unable to reveal the truth or brown nosers who’ll work overtime to conceal it to stay in the good standing of someone who can reward such warped loyalty with ease of promotion. They never thought they would ever be busted, let alone made a very public example of and hopefully a good number of their cases (with real life consequences for the accused) will be gone over with a fine tooth comb.

There could be who-knows-how-many people whose pay grades were stalled or reduced making reenlistment impossible, lost court-martials, received other-than-honorable or dishonorable discharges, or could even be in jail today because those in the good ol’ officer club were covering asses at the expense of a mere E-7 or below. 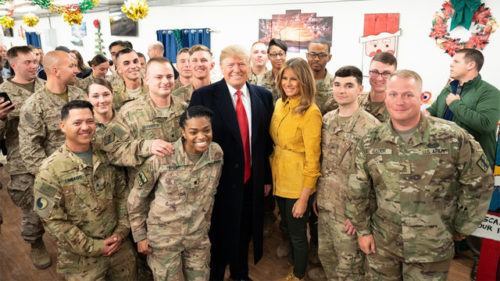 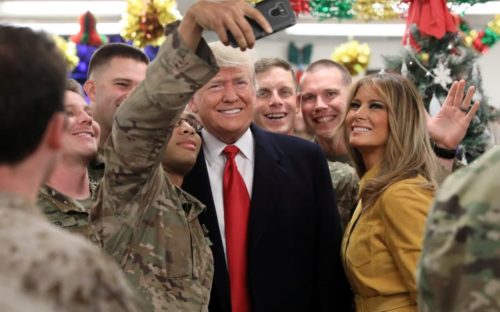 Once again, a special thank you to our Commander-in-Chief who looks out for ALL under his command.

Like officer abuse would be isolated to one branch…

A review of the Department of the Navy’s legal system has expanded to include the Marine legal community, according to a memo from Secretary of the Navy Richard V. Spencer obtained by USNI News.

“Secretary of the Navy Richard V. Spencer, in full coordination with the commandant of the Marine Corps, has directed an expansion of the U.S. Navy’s comprehensive review of the Judge Advocate General Corps to include U.S. Marine Corps Judge Advocates,” read a Thursday Navy statement to USNI News.
— USNI News, 8/22/19