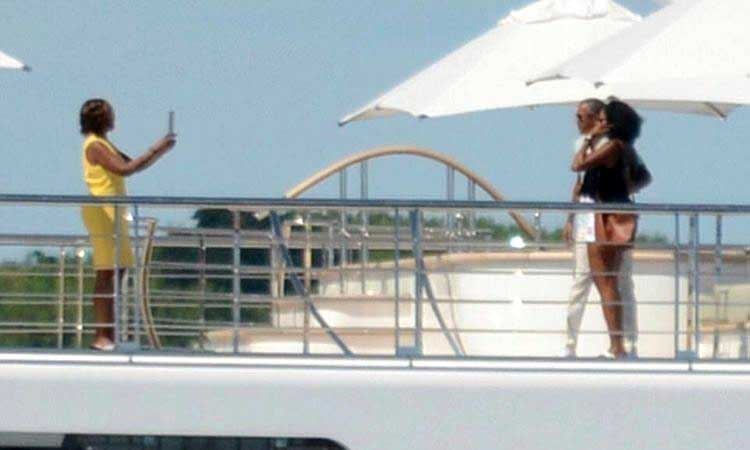 Gayle King’s serious CBS colleagues had a lot to say about her recent yacht jaunt with former first couple Barack and Michelle Obama in Tahiti, and it wasn’t positive.

“The ‘Capital J’ journalists are pissed and raving mad that she was on a yacht with the Obamas over the weekend. The old-school people were talking about it. She shouldn’t be doing that. She’s an anchor of a news program that covers the White House. You’re held to a different standard. It’s one thing to be friendly. It’s another thing to go vacationing on a yacht,” a source told us of the backlash at CBS.

King’s “CBS This Morning” ­co-anchor Charlie Rose also wasn’t happy about the jaunt. “Charlie wasn’t pleased. I thought he and Gayle got along, but when things like this happen, it makes the show look bad,” the source said.
— Page Six, 4/20/17

You embraced it, used it as a shield during Obama’s terms, found every black person possible to defend his administration with a race card, and it doesn’t appear Gayle King is invited to the New York socialite soirées Charlie Rose attends.

And for Charlie Rose, of all people, to now whine about journalism ethics when he publicly laughed with Obama speechwriters Jon Favreau and Jon Lovett about their ObamaCare catchphrase-lie that cost Americans millions of dollars, loss of doctors and plans, marriages, homes, lives, etc.

Please allow Gayle King and others, after eight-plus years of hard work done on Obama’s behalf, to enjoy a vacation… like the ones the elite, overpaid do.