Minneapolis City Council’s Tearful ‘Solidarity’ with Anyone NOT American

Shortly after the presidential election, the Minneapolis City Council introduced and passed a resolution declaring “solidarity” with their Muslim community. Using the #resist narrative following the election of President Trump, it seems to also have been an attempt to deflect from the mass stabbing at the mall in St. Cloud which garnered national attention and again highlighted the violent tendencies of some Muslims in the population. 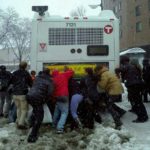 Expresses solidarity with Muslims and other targets
The Minneapolis City Council and Mayor Betsy Hodges have passed a resolution condemning violence and hate speech, and expressing solidarity with Muslims and all those targeted for their ethnicity, race or religion. The resolution recognizes that the United States was founded by immigrants, many fleeing religious persecution, who enshrined freedom of religion as one of the nation’s fundamental legal and ethical principles.

More than 3 million Muslims live in the United States today, and approximately 50,000 live in Minneapolis, making invaluable contributions to the economy, social and political life, and culture. Muslim communities and their leaders are using the language and teachings of Islam to promote peace, justice and service, and their institutions are continuing to play an essential societal role providing charitable and humanitarian services to those in need. Islam in the United States began when African Muslims were enslaved and brought to the Americas, where they later helped build this country and sacrificed their lives in every major war from the Revolutionary War on.

• Condemns all hateful speech and violent action directed at Muslims and those perceived to be Muslims, immigrants, and people of color.

• Categorically rejects political tactics that use fear to manipulate voters or to gain power or influence.

• Commits to pursuing a policy agenda that affirms civil and human rights, and ensures that those targeted on the basis of race, religion or immigration status can turn to government without fear of recrimination.

• Reaffirms the value of a pluralistic society composed of multiple cultures and the inalienable right of all people to live and practice their faith without fear.

While that’s enough to bring a tear to a liberal eye, the Minneapolis City Council’s use of their headline word: “targets”.

The people who were minding their own business and enjoying an evening at the St. Cloud Mall on September 20th, 2016 were clearly “targets” of 20-year-old Dahir Ahmed Adan, who managed to stab 10 with a knife. But those “targets” weren’t mentioned by the Minneapolis City Council.

Neither were the victims of other terror attacks by Muslims on American soil after 9-11 like the Seattle Jewish Federation shooting, the Little Rock recruiting office shooting, the Fort Hood shootings, the Waltham triple murder, the Boston Marathon bombing, the Vaughan Foods beheading incident, the Chattanooga recruiting center shootings, the University of California, Merced stabbing attack, the San Bernardino attack, the Orlando nightclub shooting, just to name a few the Minneapolis City Council declined to include when it comes to hate.

The resolution didn’t condemn all hateful speech and violent action directed at Americans who’ve been “targets” of Muslim violence around the world, in the United States, and even in St. Cloud. Instead, the Council issued a shaky voice, tearful condemnation of the American people in favor of those who didn’t come to assimilate but take over, and now they have government allies who are more interested in looking out after immigrants than those who they are Constitutionally mandated to protect… us.