There are a variety of places you can go to get politically correct, Islamophobic-free details of what occurred at the Prince William County Board of Supervisors chamber Tuesday night in Northern Virginia….

But as this is a commentary site, here’s another perspective based on what we saw. 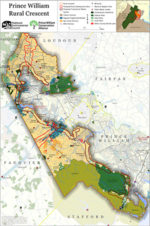 e years ago, the All Dulles Area Muslim Society (ADAMS) found a space in the “Rural Crescent” in Prince William County. Our guess is that particular site was not only chosen because the price was far cheaper than a developed parcel in town with appropriate infrastructure, but because it is easily expandable.

However, there are rules. As the area is “zoned agricultural, development is limited to one home per 10 acres and connections to the public sewer line are generally prohibited” and almost all homes and farms utilize septic systems for waste. Many people have been denied “special use” permits in this area if their requirements failed the zoning rules.

But as we all know from years of experience in the United States and other parts of the world, Muslims do not believe the rules we have to live by applies to them. Most American businesses and schools would not require time out for Christian prayer, in fact, the American Civil Liberties Union would be the first to question the appropriateness and issue guidelines while they proudly support almost any freedom of Muslim expression in public areas. One pattern almost always emerges: if Muslim requests aren’t acted upon, they become very public demands that once accommodated generate new “requests”: foot washing facilities, etc….

Despite their proposed mosque not meeting current requirements, they demanded special treatment to tap into the sewer system; treatment none of the surrounding residents received.

And we could have sworn we saw a rather uptight Ibrahim Hooper, National Communications Director for the Council on American-Islamic Relations (CAIR) standing right behind our camera.

As for the displays of “Islamophobia” some of those who spoke in favor of the mosque complained of, the worry some residents have is justified. On an almost daily basis around the world, we hear of horrific terror acts that maim and/or kill dozens or more. They’ve been carried out by those who are NOT screaming “Jesus is the greatest!” while running people over in large vehicles or slashing and/or shooting all those around them or blowing up concert-going tweens. These are people who scream “Allahu Akbar” during their terror acts and sometimes saying they did a bad thing just isn’t enough. Mass rapes, honor killings, and random murderous acts is a tough reputation to shake but calling others names for pointing out those actions done in your name is not very endearing. To date, we have yet to see ONE priest, pastor, or minister declare holy war on all those who don’t believe as they do, but we’re the Islamophobes who shouldn’t be listened to.

As far as what we experienced in the James J. McCoart Administration Building, right outside the chamber is a clearly-marked sign that read, “No food or drinks allowed in the chamber”, but what are rules to those who believe they don’t apply? 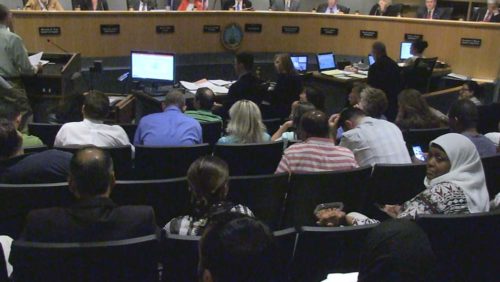 We won’t even get into the five out of six cowardly Republicans who were elected to uphold the law they enforce on others, assure all will be treated equally, and jovially caved to political correctness out of fear of being called names (if not worse) and a veiled threat of a lawsuit. The “1000” or so Muslims and liberal allies who showed up at the hearing could have easily watched it on cable access television. They showed up in person to bully, intimidate, and it worked.

At the end of the night (morning), the mosque will be built and allowed a sewage infrastructure no other resident could acquire because it was never about equal treatment; it was about special treatment.

And if you think that Nokesville mosque will be limited to only 500 as they claim, let’s see how that looks a few years from now….