‘Dignity of the Office’… Remember President ‘Cigar in the Intern’ Clinton? 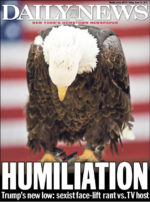 The Russia-collusion thing FINALLY was proven false news, even though that will take time to trickle down to the easily duped. While the media parroted Democrats decrying the GOP’s version of Obamacare that will kill “millions” of people, Morning Joe’s Mika Brzezinski veered off script and repeatedly insulted President Donald Trump who decided it was time to respond and aimed his wrath at the cable news hostess and the outrage has gone off the hook.

As in the usual unison, the media is going off on how Donald Trump has taken the presidency to an all-time new low. Trump has achieved all-time misogynist status, even though it’s Democrats, Republicans and their media who’ve reached the sexist assumption that a face-lift procedure is exclusive to women. Of course, Mika gets a pass on her off-color, repeated “jab” on the size of President Trump’s “teensie” hands….

Again the media is relying on the fading memory of some, the convenient dropping of the subject of others, and the fact many viewers are too young to know that there was another president who did far worse damage to the dignity of the office than Donald Trump ever has.

So, let’s put this in proper context because the media will not.

The outrage was rather muted, if not downright understanding and sympathetic, while details emerged about the in-the-workplace, adulterous activities of President Bill Clinton and White House intern Monica Lewinsky. We were all told it was no big deal, everybody does it, and very little talk about demeaning the “dignity of the office”.

Then again, the media spent more time trashing the Starr Report than displaying the appropriate outrage about some of its contents….

According to Ms. Lewinsky, she and the President kissed. She unbuttoned her jacket; either she unhooked her bra or he lifted her bra up; and he touched her breasts with his hands and mouth. Ms. Lewinsky testified: “I believe he took a phone call… and so we moved from the hallway into the back office… He put his hand down my pants and stimulated me manually in the genital area.”While the President continued talking on the phone (Ms. Lewinsky understood that the caller was a Member of Congress or a Senator), she performed oral sex on him.

Afterward, she and the President moved to the Oval Office and talked. According to Ms. Lewinsky: “He was chewing on a cigar. And then he had the cigar in his hand and he was kind of looking at the cigar in… sort of a naughty way. And so… I looked at the cigar and I looked at him and I said, we can do that, too, sometime.”

According to Ms. Lewinsky, “He focused on me pretty exclusively,” kissing her bare breasts and fondling her genitals. At one point, the President inserted a cigar into Ms. Lewinsky’s vagina, then put the cigar in his mouth and said: “It tastes good.” After they were finished, Ms. Lewinsky left the Oval Office and walked through the Rose Garden.

“… I wanted to perform oral sex on him… and so I did. And then… I think he heard something, or he heard someone in the office. So, we moved into the bathroom.”

According to Ms. Lewinsky, the President unbuttoned her blouse and touched her breasts without removing her bra. “He went to go put his hand down my pants, and then I unzipped them because it was easier. And I didn’t have any panties on. And so he manually stimulated me.” According to Ms. Lewinsky, “I wanted him to touch my genitals with his genitals,” and he did so, lightly and without penetration. Then Ms. Lewinsky performed oral sex on him, again until he ejaculated.
— CNN, 9/14/98

So, spare us the faux outrage and Donald Trump sinking the presidency to a dangerous new low. Spare us the outrage of how Donald Trump demeans women while the media and the left, to this day, dismisses how Bill Clinton both objectified and demeaned the appearance of women in his own defense.

The President responded that the harassment allegation was ludicrous, because he would never approach a small-breasted woman like Ms. (Kathleen) Willey.

The married President Bill Clinton repeatedly engaged in adulterous sexual acts IN and around the Oval Office with a subordinate in the ultimate federal workplace, lied about it to the American people, perjured himself during the investigation resulting in him losing his law license, and participated in the ensuing reputation-destruction of all the women he and the First Lady, Hillary Clinton, found politically inconvenient.

And Donald Trump has demeaned the office of the presidency… with Tweets?

Can we again say, “fake news”?