Liberals ‘Fleeing’ Blue States is NO Cause for Celebration

You’ve seen the news reports. Sadly, so many on the right share them with glee.

Nearly 450,000 People Fled These Three Deep Blue States In 2017
1,000 People a Day: Why Red States Are Getting Richer and Blue States Poorer
The Growing Blue-State Diaspora
From California Dreaming to California Leaving

And the most recent….

Yes, there are many people leaving blue states because of the high taxes, failing schools, tolerance (if not enabling)of illegal aliens, high crime, etc.

Nashville made the list of top migration destinations for the first time, joining several more affordable, mid-tier metros like Sacramento, Phoenix and Atlanta that continue to draw prospective homebuyers from expensive coastal cities, such as San Francisco, New York and Los Angeles.
— Redfin, 11/8/17

The problem is too many believe liberals are not only fleeing for the same reasons, but have finally seen the errors of their ways and are now going to participate in Republican politics and vote accordingly.

Over the last few decades, residents of many traditionally liberal states have moved to states that were once more conservative. And this pattern has played an important role in helping the Democratic Party win the last two presidential elections and four of the last six.
— Frontpage Mag, 8/24/14 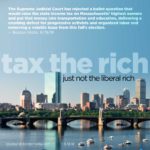 There are way too many examples of liberal hypocrisy to list: while they support higher taxes, they’ll do whatever they can to avoid paying them; they support public education but will do anything possible not send their own kids to one; they’ll support illegal aliens and “people of color” while choosing to live far from their neighborhoods until they can quietly gentrify them.

Like the aforementioned illegals who flee their poor countries and then make the areas of the United States they infest resemble the #shitholes they fled, liberals flee high tax/cost-of-living, over regulated states they enthusiastically voted blue and once comfortable will attempt to turn their new red state blue, one municipality at a time.

How dumb is that, but we’re talking about liberals.

We’ve seen many red states that have either recently gone “purple” if not flipped to blue. While voter fraud cannot be dismissed, the influx of blue state refugees and liberal college students who vote Democrat in their temporary areas are a major factor in the incremental political demographic changes now occurring nationwide. 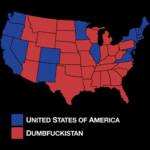 Let’s start by not making it so easy. Former Congressional candidate and Iraq veteran Paul Chabot was one of the latest, altruistic enablers with the creation of Conservative Move which boasts of a “five-step relocation plan” that probably has no way to verify an applicant is a conservative and will vote Republican, and it’s probably never asked.

What can be done about this?

Well, we can start once we figure out how to keep an insect from entering a home. 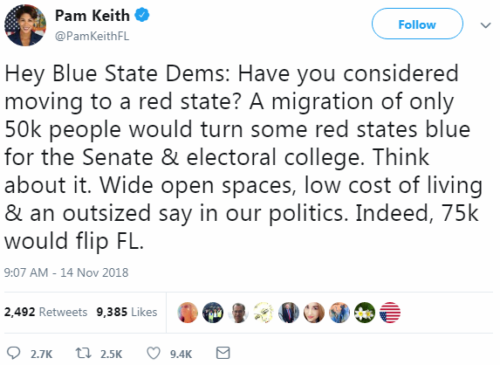 Move from the shit you voted for and infect where you wind up.