While Mark Zuckerberg plays victim off the media narrative that the Trump campaign used data provided by Cambridge Analytica; data supposedly from (depending which news reports you read) between 50-87 million unsuspecting Facebook users.

The problem is campaigns using data from Facebook to target potential voters is nothing new. While Zuckerberg and Senate Democrats are acting all shocked the activity happened, all was different in the ramp up to 2012’s Obama reelection campaign and Facebook was all too willing to assist.

TIME: Friended: How the Obama Campaign Connected with Young Voters

According to Obama’s former 2012 “director for media analytics” Carol Davidsen…. 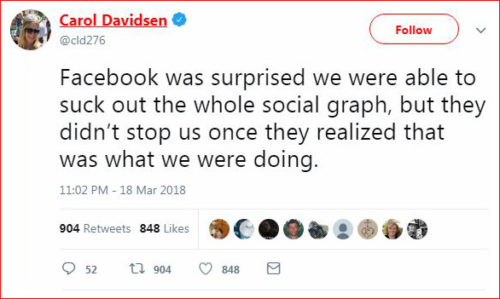 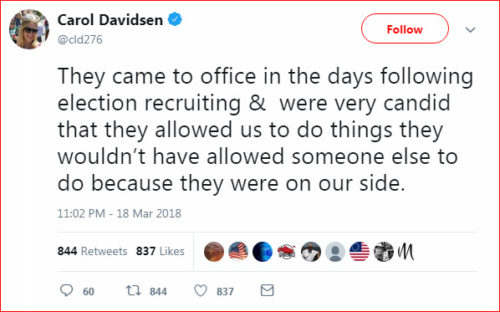 The media didn’t appear to object to the Obama campaign’s ability to obtain access to Facebook users and even got higher-ups within to almost brag about what they did.

The Obama leaders not only wanted all the lists to be able to talk to one another, they also wanted people to be able to organize their friends and family members.

But this third piece of the puzzle provided the campaign with another treasure trove of information and an organizing tool unlike anything available in the past. It took months and months to solve, but it was a huge breakthrough. If a person signed on to Dashboard through his or her Facebook account, the campaign could, with permission, gain access to that person’s Facebook friends. The Obama team called this “targeted sharing.” It knew from other research that people who pay less attention to politics are more likely to listen to a message from a friend than from someone in the campaign. The team could supply people with information about their friends based on data it had independently gathered. The campaign knew who was and who wasn’t registered to vote. It knew who had a low propensity to vote. It knew who was solid for Obama and who needed more persuasion — and a gentle or not-so-gentle nudge to vote.
— Washington Post, 7/28/13

Facebook’s allowing the Obama campaign to “do things they wouldn’t have allowed someone else to do because they were on our side” may or may not have been legally ethical, but despite how Zuckerberg and the Democrats are portraying what happened in 2016, it’s been done before and on a far greater scale. This was also another example where the media said one thing (“the campaign could, with permission, gain access”) and reality being something else entirely.

Zuckerberg faced some rather uncomfortable music on Capitol Hill on the topic…. 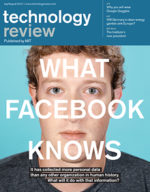 In 2012, the Obama campaign encouraged supporters to download an Obama 2012 Facebook app that, when activated, let the campaign collect Facebook data both on users and their friends. According to a July 2012 MIT Technology Review article, when you installed the app, “it said it would grab information about my friends: their birth dates, locations, and ‘likes.’ “

The campaign boasted that more than a million people downloaded the app, which, given an average friend-list size of 190, means that as many as 190 million had at least some of their Facebook data vacuumed up by the Obama campaign — without their knowledge or consent.
— Investors Business Daily