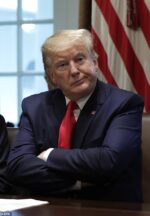 The media spent five years accusing candidate and later President Trump of colluding with Russians to get elected in 2016. During the last weeks of the 2020 election, the media claimed the Hunter Biden laptop story, broken by the New York Post was really a “foreign intelligence operation”, aka “Russian disinformation campaign” deployed to help Trump get reelected in 2020.

The media was very wrong on both counts and the ramifications were significant. A presidential candidate and later president spent valuable time fending off media attacks, a lengthy special counsel investigation, and two failed impeachments which we now officially know was a smear operation by the 2016 Hillary Clinton campaign and the Democrat National Committee. Despite widespread social media censorship and legacy media derision, it turns out the Hunter Biden laptop (and all of the incriminating data within) story was true after all.

Seeing how multi-million dollar salaries depend on the public having trust in those who deliver news, it comes as no surprise that the media is being reluctant to admit they were wrong again. They’re going to dig the credibility hole deeper by today acting like they knew the media should have taken the 2020 October Surprise seriously instead of flailing their arms in crazed opposition disgust.

The problem is, they are and they did.

What’s most annoying is “How stupid you think Americans are.”

The media today will LIE to our faces, claiming they really, really wanted to know more about the Hunter Biden-laptop story when it broke in October 2020, despite their very public shaming of Americans who did want to know more and were punished on social media for sharing it with others.

It’s a forgone conclusion that the squelching of the existence and contents of Hunter Biden’s laptop was one component that swung the presidential election for Joe Biden as millions now admit had they heard about it, may have either voted for Donald Trump or stayed home on Election Day. Now, they’ll be trying to decide, on the fly, whether they should hope Hunter takes a fall to save Joe or let the shady finances documented on the laptop take out failing “the big guy” before the 2022 midterms.