Very little is done by the Hollywood elite that doesn’t have self-promotion motivations or the potential of issuing sanctimony on the public deemed beneath them. For example, many trendy celebrities decided to one-up each other in adopting black children, many from underdeveloped nations, to show us all just how enlightened THEY are. While many of us saw this as using black children as publicity accessories, it was hoped they were brought into a loving home and offered opportunities the majority of Americans can only dream of.

What were we thinkin’?

In a May 2018 interview in Elle Magazine, so-called comedienne Chelsea Handler and actress Charlize Theron issued their intellectual musings to the public and Theron said some things that may be problematic for an it’s-all-about-me celebrity.

Perspective. I just see things clearer. A child in my twenties was the scariest idea I could think of. When I got to my thirties, I was so ready. But there’s a moment where you’re like, Oh God, I hope once I have my kids, I’m still going to want to be a parent this much. I have bad days. I make mistakes. Going through the tantrum stages when they’re such little assholes.

Don’t try this at home. 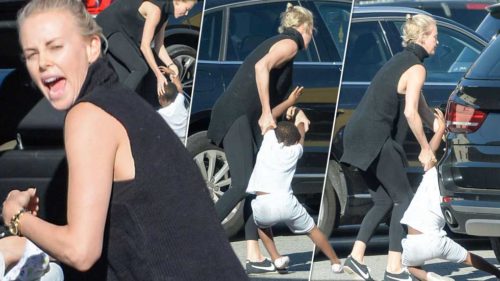 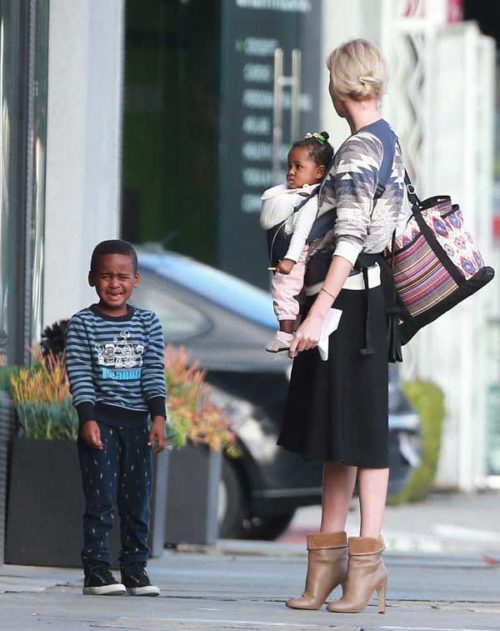 And they choose the worst moments. It’s a lot for one person. But after six years of having my two nuggets, there’s not a day when I wish I hadn’t done this. 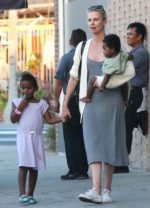 Any of us mere parents can only imagine what could happen to us should we publicly call our children “little assholes”, deserved or not. It would not go unchallenged, and if said on social media could result in a backlash from friends and possibly a busybody outing to your local child protective services. But if you’re a multi-millionaire, Oscar-winning actress, no explanation is requested.

And in our hypersensitive society, can you imagine if a white conservative with black adopted children referred to them as “nuggets”? Maybe it’s a South African thing, but very few of us would get a pass on that as well.

Here’s where things get a bit more dicey when it comes to verbal, unforced errors.

Being raised during the apartheid era in South Africa made me so hyperaware of equality and human rights. Of course, I have two black kids, but that was always something I was passionate about. I don’t even know how to talk about the last year under our new administration. But racism is much more alive and well than people thought. We can’t deny it anymore. We have to be vocal. There are places in this country where, if I got a job, I wouldn’t take it. I wouldn’t travel with my kids to some parts of America, and that’s really problematic. There are a lot of times when I look at my kids and I’m like, If this continues, I might have to [leave America]. Because the last thing I want is for my children to feel unsafe.

We can’t go one Academy Awards cycle where we’re reminded how racist Hollywood is. Whether we’re talking statements made, people overlooked, or outright discrimination, you’d think those in the entertainment industry would tread lightly when accusing others of what they do and are rarely held to account for their actions.

Later in the “interview”, Theron shares more of her superior parenting skills.

I want them to know who they are, and I want them to be so fucking proud of who they are. Building confidence for them right now is an oath I made to myself when I brought them home. They need to know where they come from and be proud of that. But they’re going to have to know that it’s a different climate for them than it is for me, and how unfair that is. If I can do something about that, of course I’m going to. 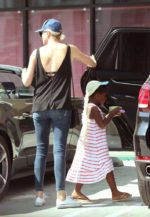 Charlize Theron is a South African born actress who was raised under apartheid regime. Her ancestors who created apartheid perpetuated one of the worst atrocities of ethnic cleansing known to mankind far worse than Adolf Hitler. Africans who were exterminated have never been recognized because they have no resources to tell the world their story.

Charlize went back to South Africa and adopted a boy named Jackson. The circumstances regarding his adoption are not known all that is known is that he was supposed to be getting a better life. Today the young boy is seen wearing a dress with a blonde wig as though he were some pet zoo animal and not a human being. This is child abuse, human rights abuse.
— Global Black History, 4/10/17

Charlize Theron has publicly said there are places she won’t go or take jobs in parts of the country and she’s clearly referring to those evil, large intolerant swaths that voted for President Trump. Of course, she and others would take high offense if she were reminded how racist Hollywood is to this day and how terrible her preferred Democrats have neglected their black constituents for decades.

When it comes to progressives, children are a commodity that can be acquired or disposed of at the evolving whim. If that person or persons have money, they can get a black child as conveniently as we go rescue a pet at a local shelter. It shouldn’t be surprising when that celebrity uses that child to show us all just how much better she is than the Americans who subsidize her lifestyle of opulence, even though her “asshole”, “nuggets” can bring her down to Earth with the rest of us.