Let’s get something off the table at the start: the whole concept of “reality television” is a fraud. If you knew all of your words and actions were being recorded, those words and actions would be influenced appropriately in comparison to an atmosphere of total privacy.

We can all thank the writer’s strike of 2008 to get reality television and its impact shifted into overdrive….

Emboldened by the strike, the studios severed existing contracts with writers, successfully turned over more of their prime-time schedules to reality programming and vowed to hold the line on filming new shows for next season. What about viewers — the real victims of the strike?
— New York Times, 2/12/08

The nation has never recovered.

That said, you’d be surprised to know the thoughts of those who devise the concepts as well as those who create the finished products behind the scenes. Imagine what the producers, crew, and those in post production think and openly say about those who’ve been selected for “reality” projects.

Do you think they’re respectful of those like Honey Boo Boo and her friends and family associates or do you think they spew insensitive comments on the appearance, limited education and mangled linguistics of those they most likely consider trash? How about those who entice the troubled into appearing on shows just to have their personal drama on display for national ridicule?

Think about this: have you ever seen a reality television program about the behind-the-scenes lives of the top Hollywood producers or media pundits? Do you think their lives are perfect or do you think you’d see arrogant elitists who treat their staff rudely, their children are spoiled entitled brats, their spouses can’t show off enough of the clothes and jewelry, their homes aren’t big enough, their cars aren’t expensive enough, and few are anyone we’d want to spend more than 47 seconds with?

How many times during a reality television show of the Hollywood elite would you here the infamous brag, “Do you know who I am?”

The late Marlon Brando said it crudely and best when on April 5, 1996 he told Larry King on CNN…. 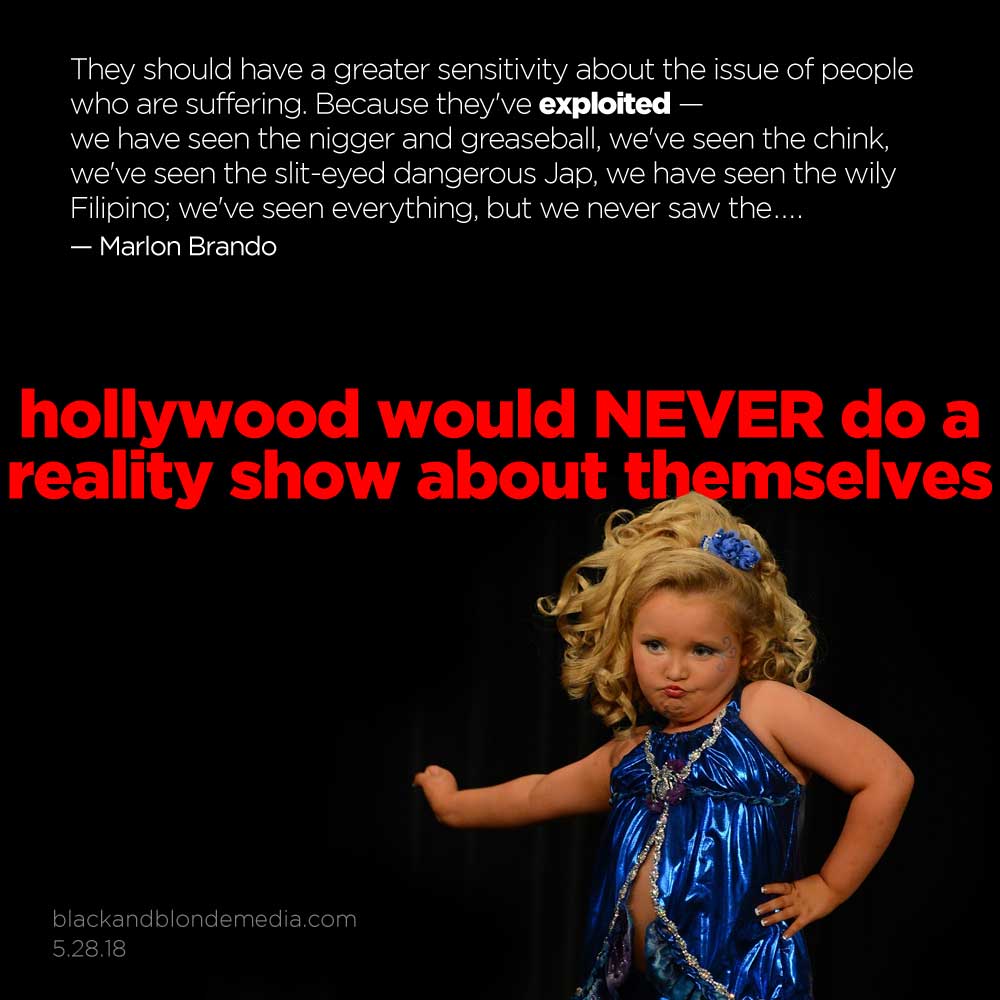 Yes, we’ve seen movie, television and advertising depictions of almost every ethnic group and socioeconomic class, and too often, those depictions are very negative, insulting and stereotypical.

Granted, Brando clumsily interjected himself into the Jews-run-Hollywood quagmire, but the more important point is that Hollywood actively scouts out those they condescending look down upon as potential entertainment for the rest of the nation to consume. They would never see themselves and their privileged (but flawed) lives as worthy of mocking and that is something the American people will never have easy access to.

That is, until they and/or their offspring run afoul of the law in a very public manner or say insensitive and/or racist things.

We’ll almost immediately be reminded that’s not who THEY are.