As we’re hearing all this about LeBron “King” James’ being good for the game of basketball and how some sportswriters are opining on his greatness on and off the court, let’s not forget an incident that happened a year ago that suspiciously still has no closure despite the smear inferred on President Trump and his supporters.

After the whole NFL kneeling thing started, Golden State Warrior Stephen Curry announced he and his championship team didn’t want to go to that traditional White House visit, Trump rescinded the invitation and LeBron decided to interject himself into the controversy with his usual class and gravitas. 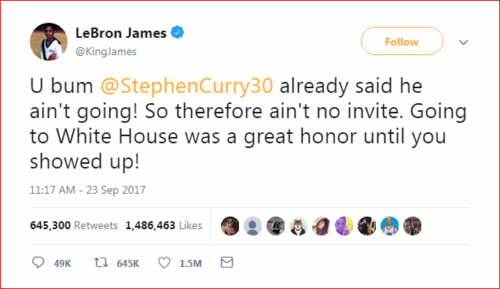 Shortly after receiving some social media blowback that would clearly damage such an inflated ego, we had an “incident”.

This doesn’t reflect well on the LAPD, that is, IF the vandalism reported actually happened and was not a narcissistic attempt to interject sympathy to diffuse the negative response after James’ disrespectful interjection into a discussion that didn’t involve him.

This whole thing stunk then and the fact that no one’s be caught for committing such an abhorrent crime on one of Los Angeles’ richest and famous part-time residents is curious at best.

Police are still investigating the graffiti incident and are examining security camera footage in an attempt to identify the perpetrator.
— CNN, 5/31/18

Think about this: someone spray paints graffiti on the side of your business. Most people would call the police, have them view the video surveillance evidence and let them do their police work thing. Someone working for King James took it upon himself to spray paint over the “racial slur” graffiti BEFORE the police arrived.

If this is to shed a light and, uh, continue to keep the conversation going on my behalf, then… then I’m okay with it.
— LeBron James, 5/31/17

Not only was he preparing to put the Cleveland Cavaliers on his shoulders in an attempt to win an NBA title but he was also putting the topic of racism in America on his “behalf” as well.

In both cases, he lost.