Devastating Internal Polling: Hillary’s Campaign Knew She Had No Chance

The bad news was probably felt by their campaign gurus, they knew things weren’t looking good and it appears to have been known by too many downwind of Hillary Clinton’s presidential campaign.

They just needed verification as it was time to implement a “salvage program”. 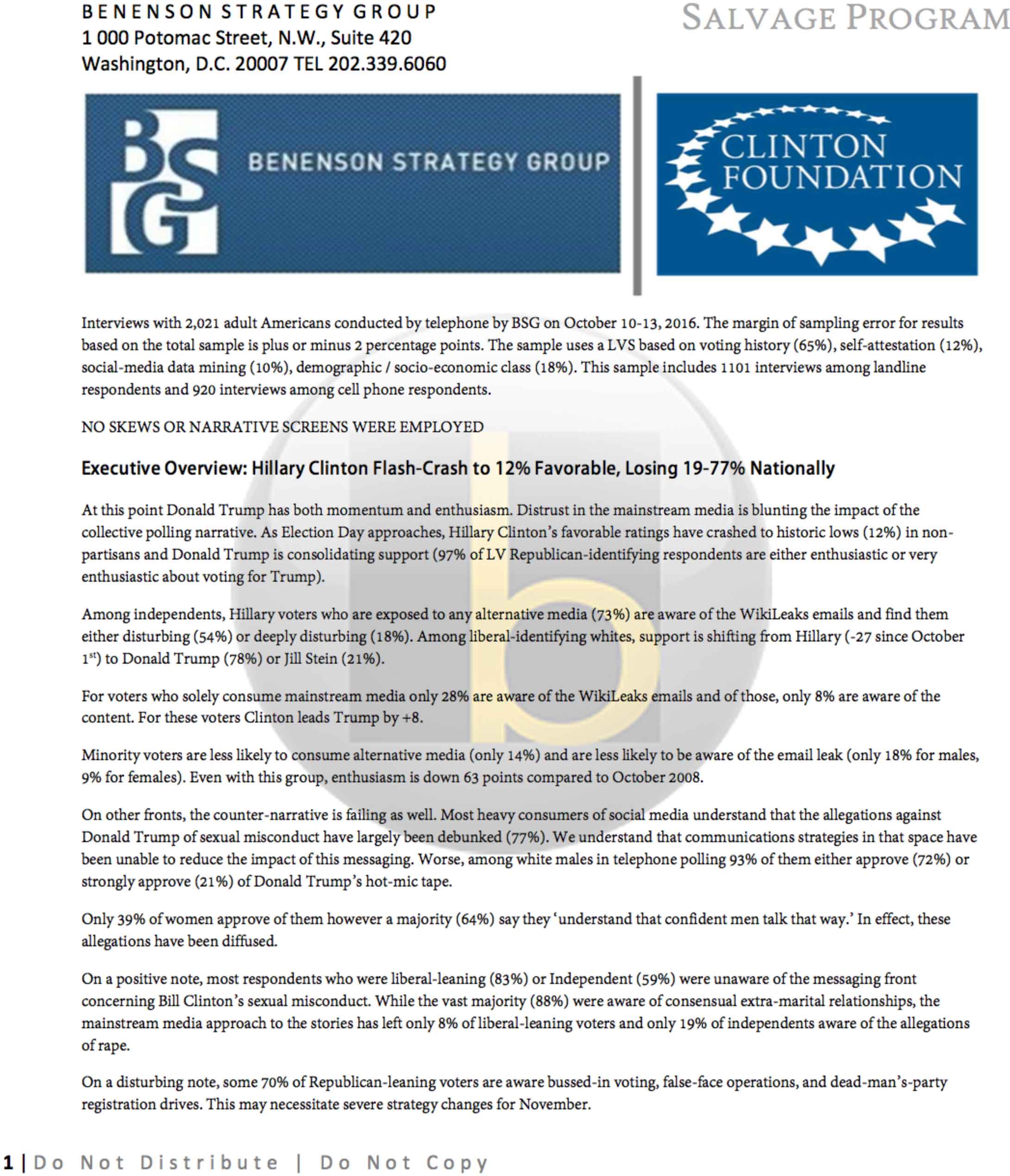 Remember how the media told us Hillary support among blacks was strong, albeit down compared to Obama’s. They all knew it was much worse than was being reported to the public.

So, let’s see what we have here.

At this point Donald Trump has both momentum and enthusiasm. Distrust in the mainstream media is blunting the impact of the collective polling narrative. As Election Day approaches, Hillary Clinton’s favorable ratings have crashed to historic lows (12%) in non-partisans and Donald Trump is consolidating support (97% of LV Republican-identifying respondents are either enthusiastic or very enthusiastic about voting for Trump).

You’d never know this if you remember the media’s coverage, especially those who laughed about his candidacy and later assured us Independents were a lock for Hillary.

Among independents, Hillary voters who are exposed to any alternative media (73%) are aware of the WikiLeaks emails and find them either disturbing (54%) or deeply disturbing (18%). Among liberal-identifying whites, support is shifting from Hillary (-27 since October 1st) to Donald Trump (78%) or Jill Stein (21%).

Smear all Republicans as “alt-right” and tie them to any evil right-of-center media they consume.

Minority voters are less likely to consume alternative media (only 14%) and are less likely to be aware of the email leak (only 18% for males, 9% for females). Even with this group, enthusiasm is down 63 points compared to October 2008.

On other fronts, the counter-narrative [against Trump] is failing as well. Most heavy consumers of social media understand that the allegations against Donald Trump of sexual misconduct have largely been debunked (77%). We understand that communications strategies in that space have been unable to reduce the impact of this messaging. Worse, among white males in telephone polling 93% of them either approve (72%) or strongly approve (21%) of Donald Trump’s hot-mic tape.

Information suppression by her friendly media was crucial for campaign, but the inconvenient truth was getting out via the very social media she still blames on phantom Russians. 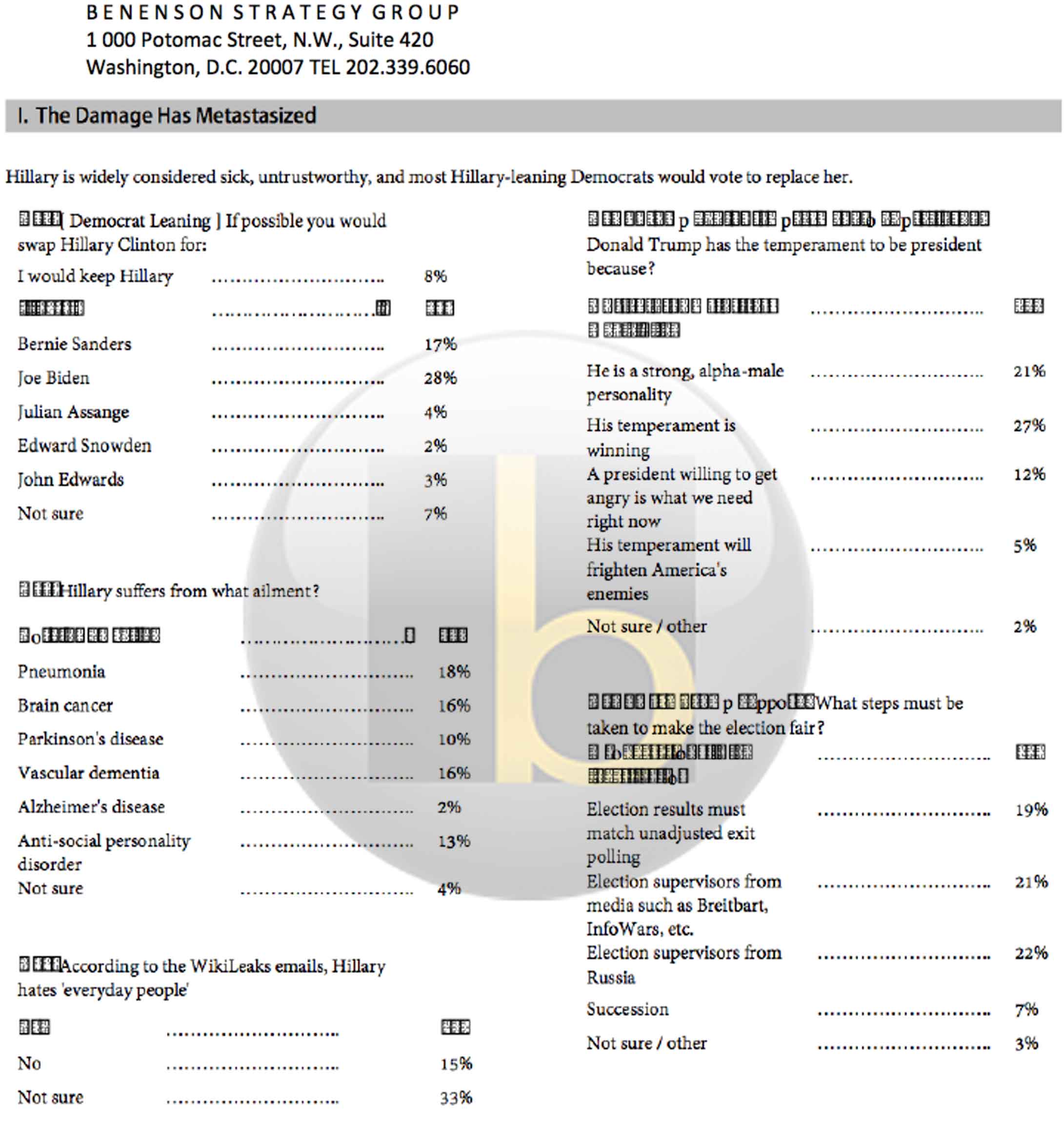 Note the admitted failure to paint Donald Trump negatively while Hillary came off as a sickly, damaged, mean candidate.

Even Hillary supporters were open to election integrity assistance from the very Russians they now blame for her defeat.

On a disturbing note, some 70% of Republican-leaning voters are aware bussed-in voting, false-face operations, and dead-man’s-party registration drives.

They were hemorrhaging support and irreversibly and tie this in with the media’s pity party on how Donald Trump disparaged them and how unsafe they felt at his rallies. 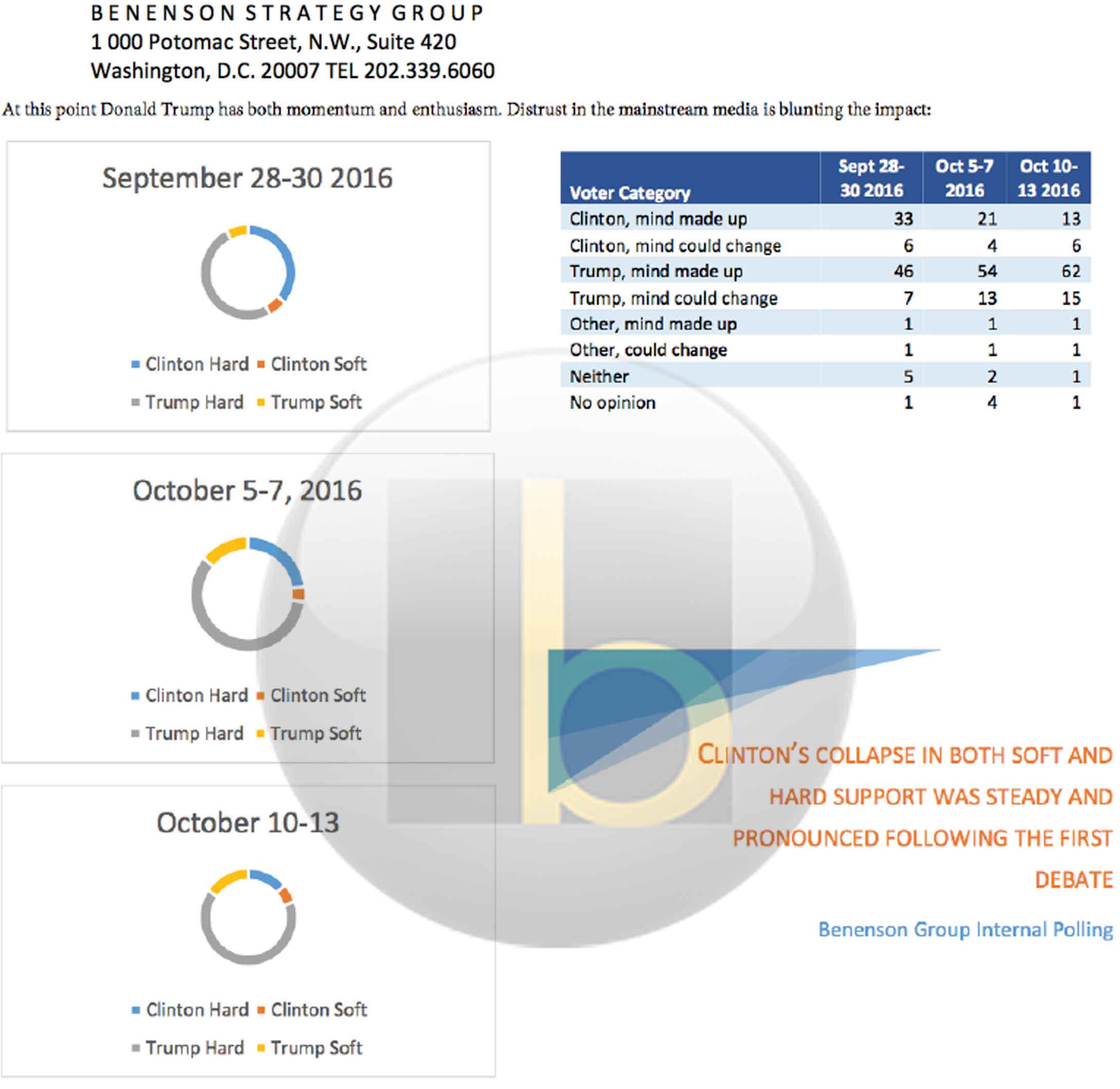 Too bad we’ll never know who in the media hierarchy saw this report and acted accordingly in favor of Hillary.

Now, here’s where things got a bit ominous.

This may necessitate severe strategy changes for November.

Just what do you think those “severe strategy changes” were and are possibly still ongoing?

So, the Clinton campaign KNEW they were going to lose and that may have been the impetus to engage their friends in the Department of Justice and Federal Bureau of Investigation to do everything, including produce an “insurance policy” to either derail Donald Trump’s election or bolix up his presidency.

They were also very concerned that Trump’s candidacy was no fluke and his supporters were approaching Election Day accordingly. 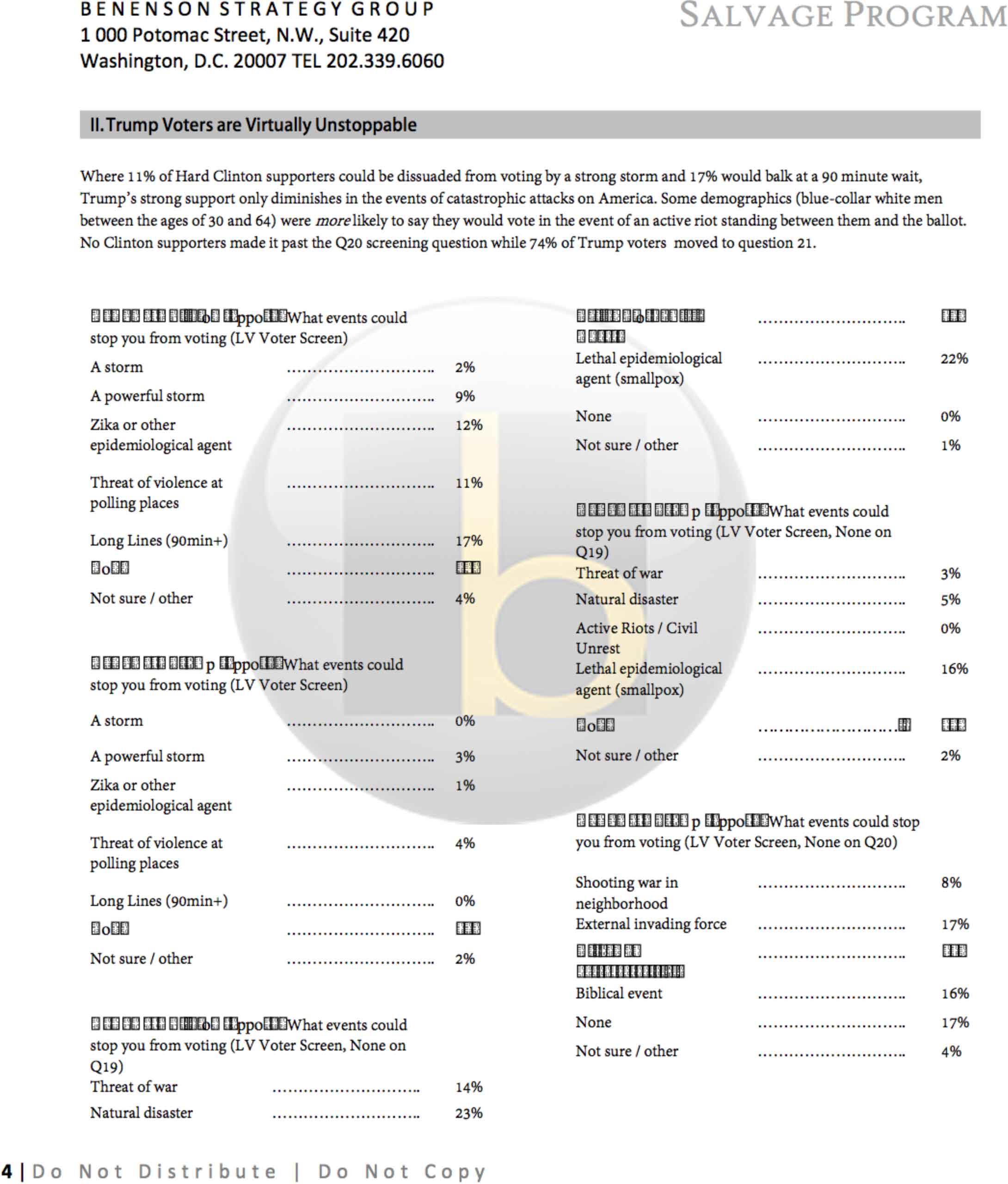 And how desperate was the Clinton campaign? Possibly in that “we’ll try anything” category to make the American people get down on their knees in sheer “awe” of Hillary. 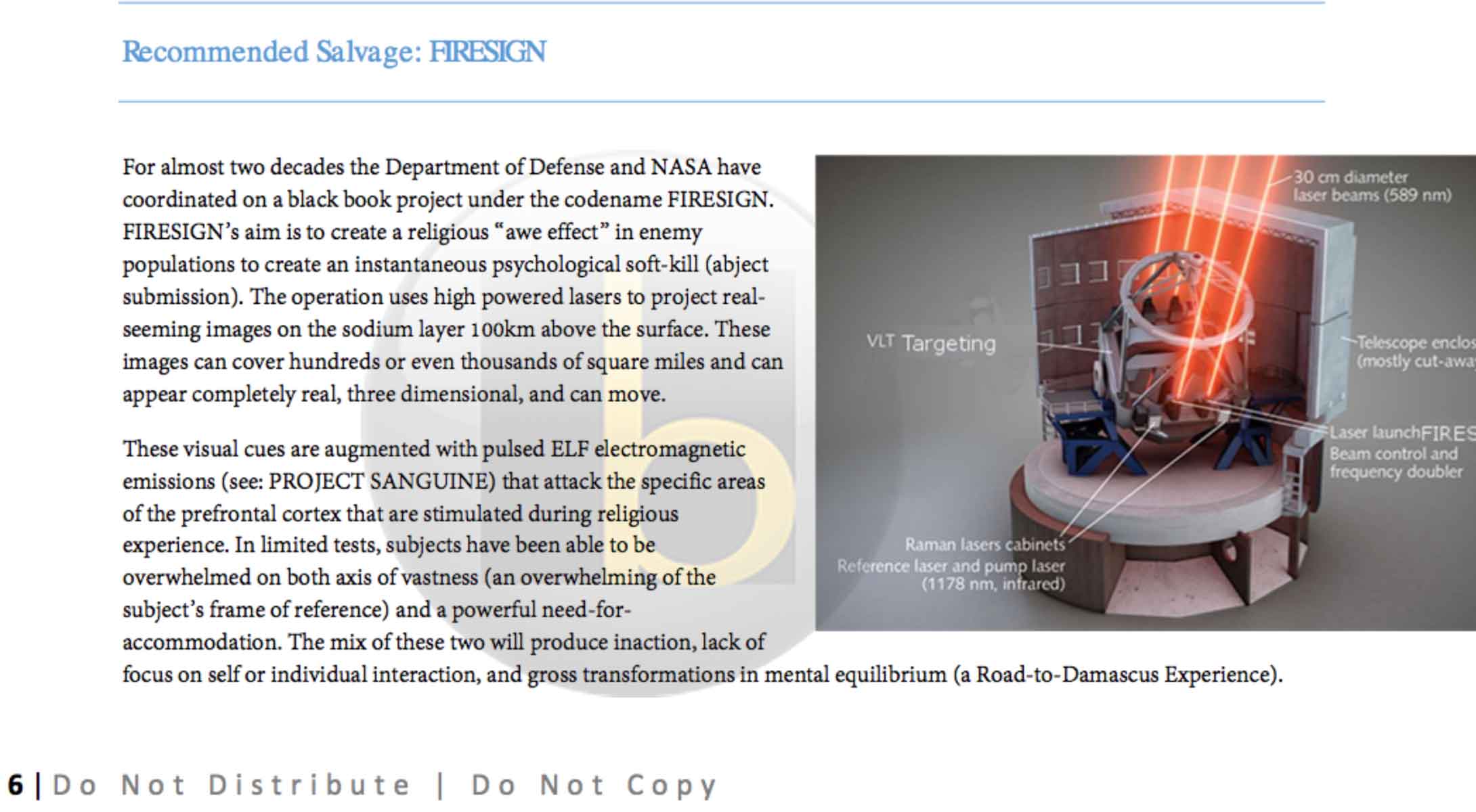 If that wasn’t arm-flailing enough, consider what they thought might be going-too-far. 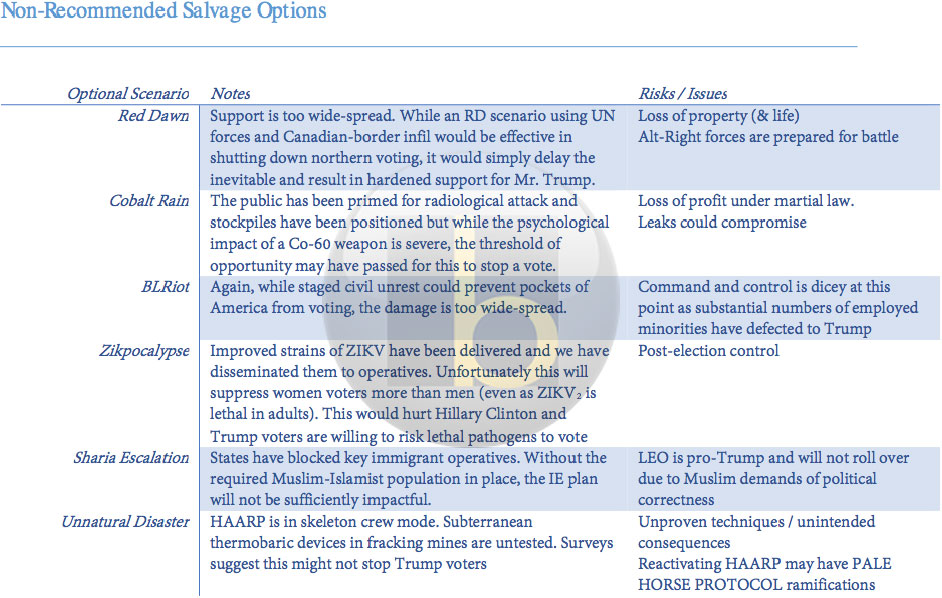 Remember this white paper whenever you hear anything about the 2016 presidential election. Hillary’s people knew it was going to be bad; how bad was the question.

We may be still living what they decided to do about it.