Are Baseball ‘Fans’ Who Get Hit By Foul Balls Looking at Their Phones?

Some of us remember when fans used to like sitting in seats where they may catch that miracle foul ball hit their way. I can’t remember so many fans, back in the day, being hit by foul balls and suing the team because we all understood the risk and accepted the fine print on the back of our tickets.

“That is a longstanding legal principle that fans who chose to sit where balls or shards of bat could hit them have a duty to pay attention for their own safety,” Steven A. Adelman, a sports attorney focusing on venue safety, tells the Boston Globe, which is owned by John Henry, the owner of the Red Sox.

But the so-called “Baseball Rule” was adopted when the game was a lot different. Things happen a lot faster now. The sport also creates more “sideshows” to distract fans from what’s happening on the field.
— Minnesota Public Radio, 6/8/15

I’m not sure exactly what “sideshows” this Minnesota Public Radio writer (who appears to know zip about baseball) is talking about that distracts from the action on the field but you only have to watch a game on television to see many fans, especially females, not paying attention to game but staring into their smartphones, totally oblivious to whatever may be incoming.

Did the Farrelly Brothers, who created the cinematic homage to Red Sox fans, add a certain scene as a zinger to those who really shouldn’t be occupying a coveted seat at the ballpark if they can’t be bothered to watch the game and are more interested in what’s happening online? 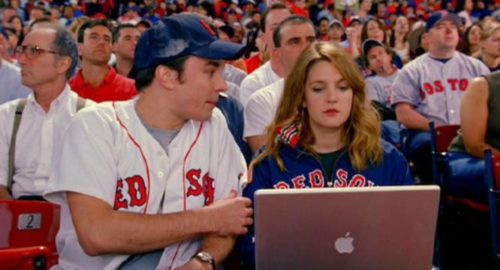 If you’re not paying attention, bad things can happen.

As she competes for a promotion, she says Ben won’t be affected by her at work all the time. But things really get out of hand when Lindsey gets hit by a line drive foul ball off of Baltimore Orioles’ Miguel Tejada.
— Fever Pitch “plot summary”, 2005

Personally, I can’t say I sympathize much for any of these people who are now suddenly being hit by items we were all prepared for back in the day. And of course, because people can’t go to a game and WATCH the game, we now have all kinds of “glass barriers”, netting and other visual obstructions placed to protect those whose minds are elsewhere. Yes, there are those instances of a line drive or a splinted bat flying towards the fans. Those used to be called souvenirs.

But a few can, and do, ruin things for everyone.

Stephanie Taubin of Massachusetts is suing the Red Sox and their owner John Henry for $9.5 million, claiming that it was their negligence that caused a ball to hit her in the face. Taubin claims that the ball fractured her face and caused neurological damage, and the incident occurred because the Red Sox took a pane of glass that divided the luxury boxes from the field out in 2005 and never replaced it. The ball hit Taubin in 2014.
— CBS Sports, 6/7/18

Okay, more than a few. 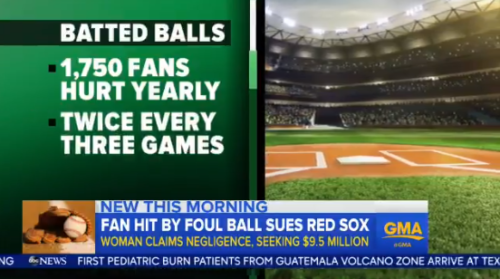 As we’re talking about a woman who was injured, no one will dare request the forensics of what she was doing at the moment she was hit but if someone where to go back and look at how many fans were hurt yearly, pre-and-post the mass introduction of smartphones into society, we may see a distinct pattern.

How about breaking those numbers of fans being hit by gender and age?

When we went to Fenway Park as children (bleacher seats were a dollar), balls, bats, and players came flying into the stands and there were no serious injuries reported. Then again, there wasn’t live streaming or selfies being transmitted back to Facebook. 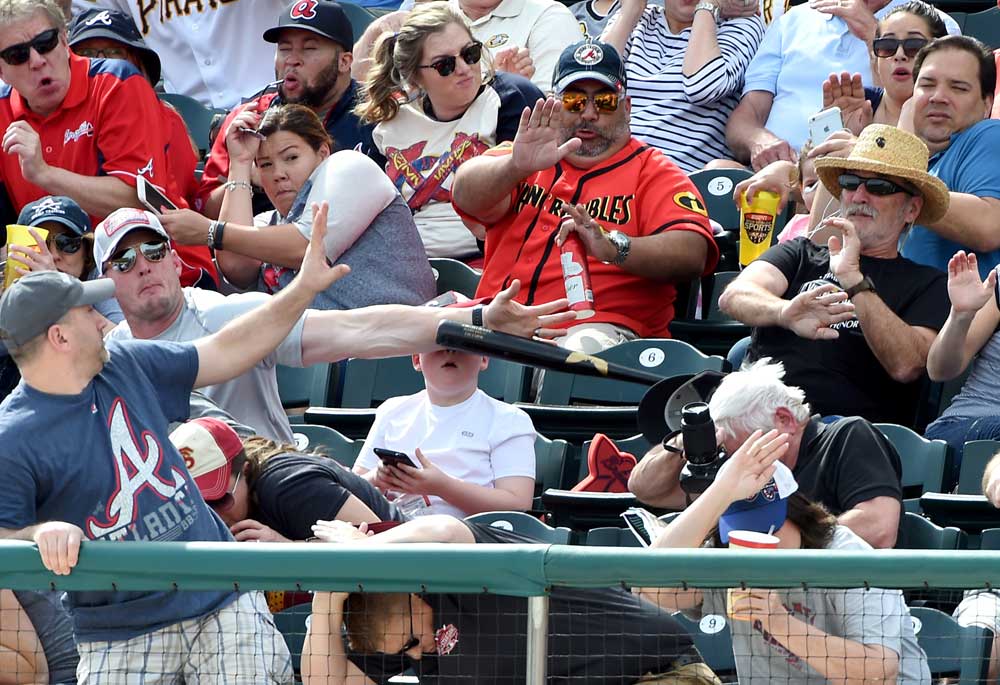 My friends and I went to WATCH THE GAME and children used to bring their gloves to the game for just this kind of golden opportunity. We knew and accepted the potential risk involved.

A Suffolk County jury yesterday found the Red Sox and owner John Henry were not negligent when a fan was struck in the face in 2014 by a foul ball hit by former Sox slugger David Ortiz.

“Obviously, we’re disappointed at the result,” said Stephanie Taubin’s lawyer Marc Diller. “It needs to be known that Ms. Taubin was paying attention, and the speed of the ball was so fast that she couldn’t avoid it.”
— Boston Herald, 6/14/18