Ali Watkins: How to Screw Yourself Into a High-Profile Journalism Gig!

While feminists continue to demand they be given the same opportunities as men, it appears some of the very complaints some have today regarding what they had to do to get high-profile jobs, at least one shows paid off; big time!

We’re thrilled to announce that Ali Watkins of Politico is joining the Washington Bureau as a national security reporter.

Ali, who covers intelligence and national security for Politico, has had a series of important scoops. She broke news that Carter Page, a former Trump campaign adviser, met with a Russian spy in 2013. She also had exclusive new details on China’s harassment of American spies. Last month, she was the first to reveal the name of the Russian woman, Olga Vinogradova, who met with the former Trump adviser George Papadopoulos during the 2016 campaign.

Ali arrived in Washington in 2013 as an intern covering national security for McClatchy, where she was part of a Pulitzer-finalist team that uncovered the C.I.A.’s spying on Senate Intelligence Committee computers.

After McClatchy, Ali covered national security for The Huffington Post and then Buzzfeed before going to Politico.
— New York Times, 12/5/17

Ever since the Harvey Weinstein saga broke, we’ve argued that some women were willing to cozy up to a pig in order to have a shot at a lucrative career in Hollywood. However, you’re only as good as your professional talent and when some of the careers didn’t blossom as desired, many of these women are now screaming rape.

The template’s not been thrown out the window altogether….

What is known today is that in December 2013, the Temple University intern had begun a romantic relationship with James A. Wolfe, a man 30 years her senior. He happened to sit amid a flow of juicy information as director of security for the same Senate committee. The reporter-source romance would last four years. Then the FBI intervened.

From McClatchy, she went on to land jobs in quick succession at HuffPost, BuzzFeed, Politico and finally the New York Times, where she resides today at the Washington bureau.
— Washington Times, 6/9/18

That’s not to say everyone in high-profile journalism screwed their way to the top, but many did, and it prompted us to do some digging on their qualifications to occupy the most prominent positions in the profession; qualifications that can legitimately be questioned.

In most professions, one needs to at least have an educational background, if not a degree, in that chosen profession. However that doesn’t seem to apply to those who work in the highest seats of broadcast journalism.

For some, nepotism and/or sexual favoritism didn’t hurt either.
— On-Air ‘Journalists’ Are Lib-Trained, Poli-Sci Hacks

Of course, this is not to imply that ALL women, especially now millennial women who occupy a growing number of very influential positions in the media and in-and-around Capitol Hill, screwed their way to jobs that they’re relatively inexperienced to have acquired. It does show lazy journalism on Ali Watkins’ part as she found a shortcut to doing her job instead of that “shoe leather” journalism; a shortcut she was rewarded for. 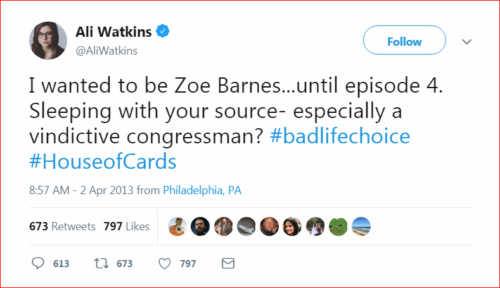 Worked out for some people, and for Ali, once was not enough.

“Last fall, after Ms. Watkins and Mr. Wolfe had broken up and while she was still reporting on the intelligence committee for Politico, she briefly dated another staff member at the committee, friends said. That relationship, which has not been previously reported, ended when the two decided not to pursue something more serious,” the Times wrote.
— Fox News, 6/25/18

Will we see Ali Watkins being stripped of her co-Pulitzer Prize as quickly as Bill Cosby was of his many recognitions? Probably not because women are always the victim. She simply did what she had to do in a man’s profession, even though the numbers are narrowing.

And like a federal government agency, Watkins was not fired for wrongdoing but… reassigned.

The New York Times demoted a reporter who acknowledged a romantic relationship with a Senate staffer who is suspected of leaking information to journalists. Times editor Dean Baquet said Tuesday he would reassign the reporter, Ali Watkins from the paper’s Washington bureau to New York in the wake of revelations that she had been involved with James Wolfe, the former head of security for the Senate Intelligence Committee. Watkins covered the committee for a number of publications, although not the Times.

In a staff memo on Tuesday, Baquet said Watkins would be reassigned to an unspecified position in New York “where she will be closely supervised and have a senior mentor.”
— New York Times “Style” section, 7/3/18

Thanks to Ms. Watkins, all women (especially younger women) will be looked at with that “What did she do to get there?” There was a time when you had to pay dues that required years, if not decades of hard work, to get the attention of the big house on the hill. If you’re a young woman, no matter how much she’ll commiserate with the #MeToo screamers, all it takes is spread your legs.

There are takers and rewards.