By the year 2018 in the United States of America, the rules for running and participating in an election should be easy.

One has months to make sure he or she is registered to vote. There are many ways to do this: register by mail or find a way to get to an office by way of the same modes of transportation as one uses to go to a supermarket or coffee shop or a mall. Voting is accomplished by the same means and millions of taxpayer dollars are allocated to election divisions on the local level to assure all votes are counted on Election Night so winners and losers are certified and the American people know who their representatives will be.

At least that’s the way it’s supposed to be and was until a few years ago. For example….

In 2016, California Gov. Jerry Brown opened the door to fraud by signing a law allowing anyone to drop off a ballot for another person. This gave rise to a new practice known as “ballot harvesting” in which Democratic Party canvassers visited people who had not voted on Election Day and collected their mail-in ballots and turned them in on their behalf.

So what the Democrats did was they looked at the Election Day returns and then targeted those districts they lost but where the margin was close enough that victory might be snatched from the jaws of defeat by a little ballot harvesting.
— Dick Morris, 12/3/18

So, it appears the electorate officially votes until a certain time and the results are observed unless the Democrat is losing. Then all efforts must be made to “count every vote” until the Democrat wins. At least that’s the only impression one can walk away with after the 2018 midterm elections.

Fresno Democrat TJ Cox has overtaken incumbent David Valadao in their race for California’s 21st Congressional District seat. Cox now holds a 438-vote over the Hanford Republican – 55,650 votes to 55,212. This is Cox’s first lead in the race. It appears Cox is on his way to delivering Democrats their 40th flipped seat – one that analysts and news media called for Valadao on election night.
— Fresno Bee, 11/27/18

Why are there “ballots left to count”? For previous decades until today, what happened to all of those ballots after races were called on election nights of the past? Were they left in some room or destroyed?

Southern California Rep. Mimi Walters was ousted Thursday night, the latest House Republican to lose their seat in the formerly deep-red Orange County. The Associated Press called the 45th congressional district race with Democrat Katie Porter leading Walters, a two-term incumbent who previously served in the California senate, by just over 6,000 votes as ballots continue to be counted.
— Politico, 11/15/18

Sorry, but I can’t remember votes being counted the weekend after an election in years past.

Must be the “new normal” when a Democrat is losing.

The recount in Florida has put the state’s election machinery to the test, and it has failed miserably: Almost 3,000 votes have vanished, the New York Times reported, while Florida recounts three state and three local elections that have yet to be called. The Florida secretary of state reported 900 fewer votes than were tallied originally, and that number is expected to balloon by 2,000 more votes when results from Broward County are reported. Although this number of votes would not necessarily swing the election from one candidate to another, it’s certainly enough to cause concern.
— Yahoo, 11/17/18

Broward County isn’t some rinky-dink, podunk in the sticks. 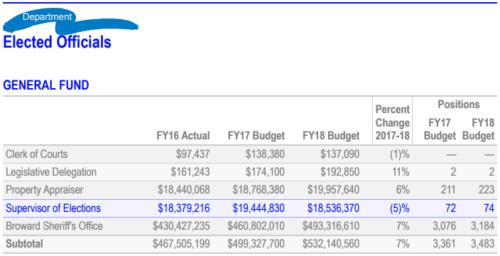 Florida has allocated millions of dollars to staff and maintain their election apparatus yet they still manage to be a national example of gross incompetence, conveniently helmed by a black woman of equally questionable competence.

With a noon Sunday deadline looming, the three-person Canvassing Board was nonplussed and uncertain what to do. “We are concerned with the ramifications of failing to complete this task,” said Broward County Judge Betsy Benson, a member of the board. “But we don’t want to disenfranchise 714,859 voters at the expense of 2,000 voters.”

With no chance of the missing ballots surfacing, the proposed fix involves some math.
— Sun Sentinel, 11/17/18

If any of us “lost” the very work materials necessary to do our jobs, we’d be reprimanded at the least. If it happened repeatedly and your name became a national adjective, you’d lose your job in a heartbeat.

Gov. Rick Scott late Friday suspended embattled Broward County Supervisor of Elections Brenda Snipes even though Snipes had already agreed to step down from her post in early January. Scott replaced Snipes with his former general counsel even though Peter Antonacci has no elections experience. Snipes responded by rescinding her previous resignation — and will now be “fighting this to the very end,” her attorney said during a Saturday news conference.
— WFTS, 12/2/18

But as we’re talking about government, rules of competence don’t apply and if it means possibly breaking the law…? 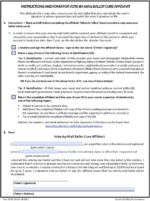 A day after Florida’s election left top state races too close to call, a Democratic party leader directed staffers and volunteers to share altered election forms with voters to fix signature problems on absentee ballots after the state’s deadline. The altered forms surfaced in Broward, Santa Rosa, Citrus and Okaloosa counties and were reported to federal prosecutors to review for possible election fraud as Florida counties completed a required recount in three top races.

But an email obtained by the USA TODAY NETWORK – Florida shows that Florida Democrats were organizing a broader statewide effort beyond those counties to give voters the altered forms to fix improper absentee ballots after the Nov. 5 deadline. Democratic party leaders provided staffers with copies of a form, known as a “cure affidavit,” that had been modified to include an inaccurate Nov. 8 deadline.
— Naples Daily News, 11/15/18

Have you noticed that “voter disenfranchisement” mainly happens in black districts? If there are any lingering racist remnants from the segregation era, Democrats still haven’t owned that.

Instead of blaming the incompetence of paid election officials like Brenda Snipes, Democrats prey on their constituents and portray them as physically and/or mentally unable to do what other citizens have done for decades, relatively unimpeded. A notion that’s insulting to black people… should they even be asked.

In 2012, Bob produced a video that actually included those you rarely hear from in the liberal media.

Moving forward, how are the law-abiding expected to proceed, especially when liberals improvise new ways to dilute the concept of one person, one vote? You know it would only be palatable if it resulted in Democrat victories.

Ranked choice voting (RCV) makes democracy more fair and functional. It works in a variety of contexts. It is a simple change that can have a big impact.

Always be wary of the Democrats’ use of the word “democracy”.

With ranked choice voting, voters can rank as many candidates as they want in order of choice. Candidates do best when they attract a strong core of first-choice support while also reaching out for second and even third choices. When used as an “instant runoff” to elect a single candidate like a mayor or a governor, RCV helps elect a candidate that better reflects the support of a majority of voters. When used as a form of fair representation voting to elect more than one candidate like a city council, state legislature or even Congress, RCV helps to more fairly represent the full spectrum of voters.
— Fair Vote

Democrats have successfully made the hard November Election Day voting deadline an option that depends on who is “winning” and the results are disturbing, to say the least.

If the Democrat is winning by that 7 or 8pm cutoff, the “will of the people” must be observed. However if the Republican is winning, “every vote must be counted” no matter where they miraculously come from or how long it takes to “find” them.